Okay, I’m going to be totally honest with you guys since that’s the way I roll. Block N Load from Jagex (at the moment sadly best known for the swift demise of Transformers Universe) can be completely summed up by the description “Team Fortress 2 combined with Minecraft”. It’s so accurate it’s scary, and I could end the preview right here if I so felt like it because you’ve probably got a fair picture of what the game’s like already. I’ve got a few more paragraphs to fill though, so let’s flesh out that picture a little.

I think "Minecraft meets Team Fortress 2" has an accurate ring to it...

Block N Load is a team-based competitive shooter with a big twist, and you can probably guess at that twist right now. There are two teams and currently six possible character classes, with five players on each side. The objective is to destroy the opposing team’s power cubes in order before finally taking down their Cube Core and winning the match, which is of course easier said than done. You defend, attack, respawn, repeat until winning. So far, so Team Fortress 2, and the fun cartoony graphics, while nice, don’t help that perception.

But then we get to the Minecraft-shaped twist. You see, shooting isn’t all that Block N Load is about. The maps are made entirely of blocks of different varieties. At any point during gameplay you can flip between guns and a digging tool, with which you can literally destroy any block you see which the entire map is made up of. Digging gains you resources with which you can create new blocks, from bog-standard stone to usual items like healing stations, bounce pads or spawn points depends on what character class you choose. 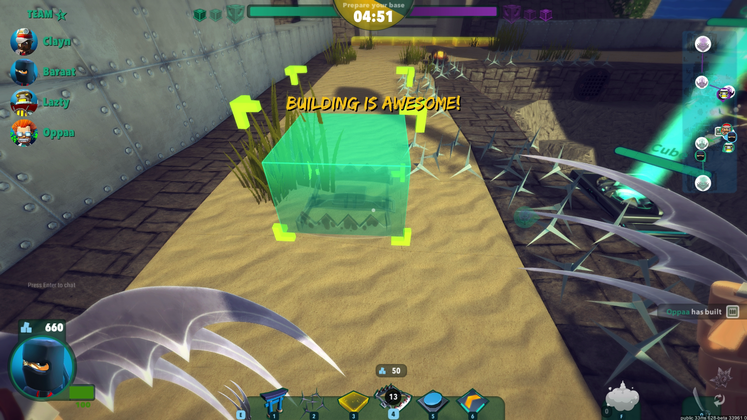 The building stage. Here I'm crafting a delicious mantrap block for my opponents. I'm sure their legs will enjoy it

Most importantly though, this ability to dig and build means that you can get to your opponent’s base absolutely any way you want. You want to build a bridge from the roof of your base over to the enemy Cube Core? You can do it. You want to dig under the entire map and bypass all the opposing team’s defences? You can do that too. There’s no learning the map layout here since it can totally change from minute to minute. For example in my first match I carved a staircase into the side of the enemy base that they never noticed, and another time I sneakily placed a spawn point in the middle of the base on a narrow ledge where they’d never see it. I managed to nearly single-handedly take down two of their Cubes that way, and they only have usually two plus the Core - although on the harder maps they just have the Core.

At the beginning of a match you get a few minutes of build-and-mine time, with a giant forcefield stopping both teams from attacking. You use this time to collect resources, create defences (which can be as simple as a giant wall or chasm around your Cubes to more elaborate defensive blocks like turrets or spiky caltrops), create little defended stashes for health stations which are vital for defensive work, create spawn points for easy base access… the world is your oyster for three minutes, then the bullets and blocks fly. 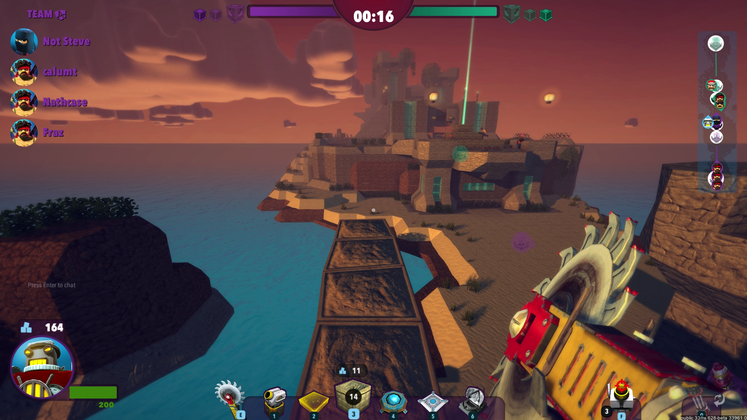 No way is this going to work (spoiler - it didn't, I was dead one second after I took this picture)

The six character classes are quite traditional Team Fortress 2 staples, despite their even more outlandish appearances. There’s a robot version of the Heavy who relies on firepower, a slightly more explosives-based version of the Soldier, a British upper-class hunter that’s basically the Sniper, an Engineer who’s more construction and defence-based, a Ninja who’s not really a Spy (he can’t disguise himself for example) but is similarly sneaky and possibly devastating the way he quickly gets around the map, and a Scientist who’s probably closer to Plants Vs Zombies: Garden Warfare’s zombie equivalent than the Medic of TF2. Each have different weapons of course, a single unique special ability, and their own types of useful blocks they can build which they can choose six of in the lobby. I personally stuck with the Ninja for the most part, otherwise known as ‘O. B. “Juan” Shinobi’, because his ability to climb any surface and his short-range teleporter made him very useful in offence. As mentioned, in one match I nearly demolished the entire opposing side single-handedly because he was so unstoppable - and that was my first time playing as a Ninja!

I don’t know if more classes will be added later, but I presume there will be more maps as there are only a total of five that are cycling in the current beta so we could only choose between two in any match. Some of these had water you could swim in as a base, others were in the sky or above lava so if you fell in or dug too greedily and too deep you’d die immediately. Some were surrounded by solid metal blocks that couldn’t be mined, others were completely mineable with no restrictions at all. One map was thin and snake-like, another was two big sandcastles divided by a bridge, and another was basically just a big long tree-covered block in the sky. This one in particular was a sniper’s paradise… until everyone realised they could bypass the entire “No Man’s Land” at the centre by digging tunnels underground, at which point the top of the map nearly became abandoned.

One of the most interesting - and occasionally massively frustrating if you’re attacking - points is that playing defensively is just as valid as playing offensively, particularly if you’re playing as the Engineer/Construction Worker “Anthony Turreto”. There’s no strict medic role but Turreto can make a healing med-station block, and with him it is just as much fun to camp by the Cubes as it is to lead a full-on assault. Turreto in particular is perfect for this as he’s able to deploy and repair turrets and various other useful blocks to keep enemies out. In one match I found a player who’d walled himself in with the Cube Core and around a dozen turrets and other traps, so if the defences didn’t kill me his shotgun would. The bastard. I certainly applaud this, as there are plenty of people who prefer to take a more defensive role in online gaming instead of a reflexive or twitch-based role like most shooters these days, and this will be great news for anyone who does. 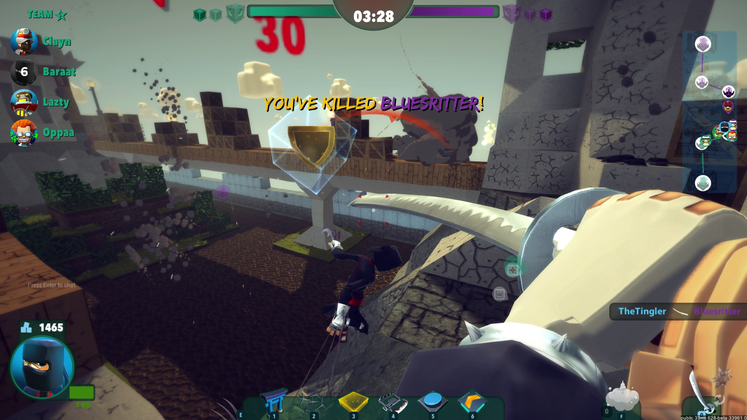 On that note before we go let’s address the elephant in the room that some of you may be aware of: Jagex have already tried to make this exact game before. It was called Ace of Spades, it was clearly a combination of Team Fortress 2 and Minecraft, and it was god-awful. It utterly failed to make use of a fun idea, the mining/building side was rubbish, and every match quickly devolved into a twitch-shooter. So why are we calling your attention to Block N Load? Simple: because it’s actually good fun and Jagex have clearly learned from the failure of Ace of Spades and crafted a far better version of their initial vision, one that’s not geared to twitch-shooting and where the mining and building stuff actually matters.

Block N Load is already looking and playing mighty promising in its current beta, and while there’s a lot to get used to - just memorizing what block types do what will take most people a while - it’s definitely one to keep an eye on as we move closer to release.

Jagex are aiming to release Block N Load in February 2015 and is currently planned as PC only. So bonus points there.

Most Anticipated Feature/Element: Seeing what a long, sustained play will be like. 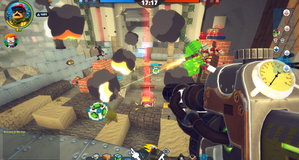 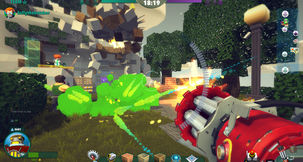 GameWatcher takes on Jagex in a Block N Load...