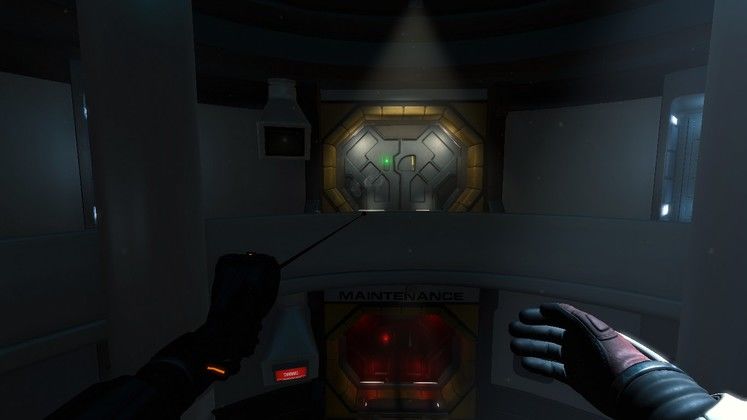 Downward Spiral: Horus Station is a game set on an abandoned space station. Since space stations, be they abandoned, populated, or alien/monster/zombie-infested, are my favorite locations in video games, and usually needn’t achieve much to impress or at least entertain me - and yet my time with Horus Station wasn’t particularly stellar, but the potential is present and I hope the developers turn things around by the time of full release.

A first-person shooter/exploration game, Downward Spiral: Horus Station supports VR, and this functionality is one of its most marketed aspects. In practice, it feels more like a VR game that also happens to support regular displays and controls, but the mechanics and the design are decidedly aimed at headsets. Played from the first-person perspective, Horus Station sees you, an astronaut, arriving to the decrepit titular installation to discover who redecorated it to resemble a typical sci-fi horror location.

Artificial gravity has been deactivated on the station, making navigation function and feel different than in most games. While the areas are designed with gravity in mind, since the station had it when it was operational, players can traverse the rooms in every which way. The zero-gravity controls definitely need work. While you can always slap a “controller recommended” warning on any game, I feel that if a title is released on PC it should function with PC controls. While Horus Station achieves this, said controls are uncomfortable and awkward, so I surrendered and played with a controller instead. 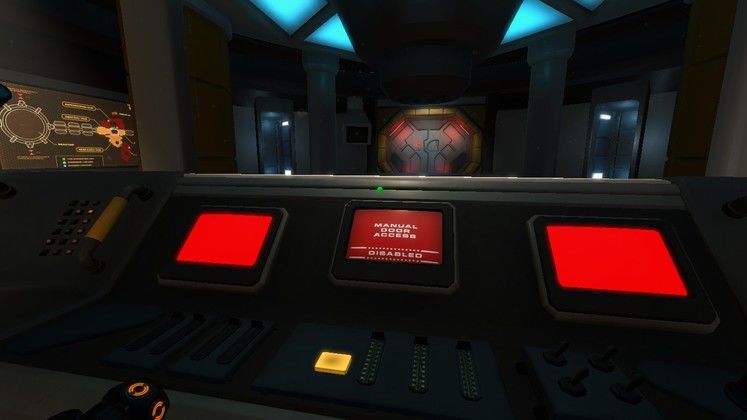 Since most first-person shooters involve exploration as an element of gameplay, it may seem strange that I highlighted it in the genre description of Horus Station. I did so because in the preview build of the game, spanning the first episode of the title, there isn’t any actual shooting involved, even though you get a gun about halfway through. I feel the developers are doing themselves a disservice with the scope of the preview content, because based on their own descriptions, this first episode is hardly indicative of what the whole game’s feature-set includes.

Horus Station will be comprised of 5 episodes or ‘acts’ as the game calls them. The first act can be banged out in about an hour if you spend time faffing about the station. There is no save functionality, so either you play through to the end in one session or have to start from the beginning, but with such a short runtime that isn’t too big an issue. This act contains no combat, so I cannot comment on that.

Having explored a small section of the station, a physics puzzle involving plugging floating batteries back into their sockets was the only self-contained interaction. Following that, the game has you float to one part of the station, unlock a door somewhere else, float there, unlock yet another door, then float out into space, over into another part of the station and it’s over. There isn’t a whole lot to do, and exploration isn’t rewarded. The weapon you find, and the grappling hook to assist movement, are both in unavoidable locations. In an early section, you can find an audio recording that plays music, hinting that audio logs will appear later, but that’s it. 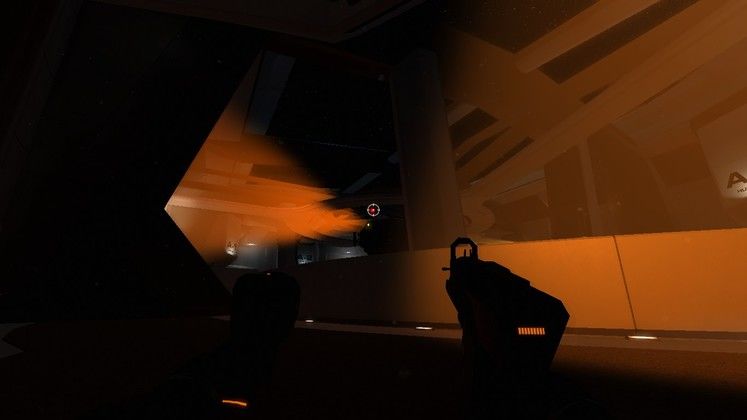 Horus Station doesn’t present players with much to do, or motivation to do what little there is to do. There is nothing wrong with a subtle story that takes its time to pick up the pace, but act 1 of the game reveals precisely nothing, nor does it present interesting clues or mysteries that would hook players and play on their curiosity. The starting premise “find out what happened”, is all that we’re left with once the episode is over.

At one point, before the player ventures out into space, a large robot with an orange searchlight rises out of the floor in a hub area, which was the episode’s big set-piece. I assumed that this was a stealth section, challenging us to reach the airlock on the other side of the room without being caught, however after purposefully venturing into the orange light, nothing happened. I shot at the robot, and there was no reaction. This was the perfect set-up for a boss-fight-esque encounter. A big, three-legged floating ominous mecha with a clear, glowing potential-weak-spot barring my escape? Now, I don’t know if this actually was the intention and I just encountered a bug, but the same thing happened a second time when I tested out that theory.

Atmosphere (ha) is fairly well executed, however. Horus Station avoids the tropes of blood spatter writing out “help” on the bulkheads, flickering lights, distant screaming and the like to create a tense atmosphere. Instead, it uses subtle sound design to increase tension, and instead of eliciting fear it generates a sense of unease. Even though abandoned, Horus Station seems tidy, with the lack of gravity causing random objects to float about and the absolute lack of anyone else on board being the only signs that something is amiss. The sole element of the first episode which might make players curious is the only dead body you ever encounter, which is floating outside a window in space. It isn’t mangled or visibly damaged either, raising questions.

In it’s current state, Horus Station is very little game. It’s short with little by way of actual content, but the potential is there, and the atmosphere is already nailed. I just hope that by the time the game gets a full release, it will be a lot meatier, and more importantly will strive for a stronger opening. 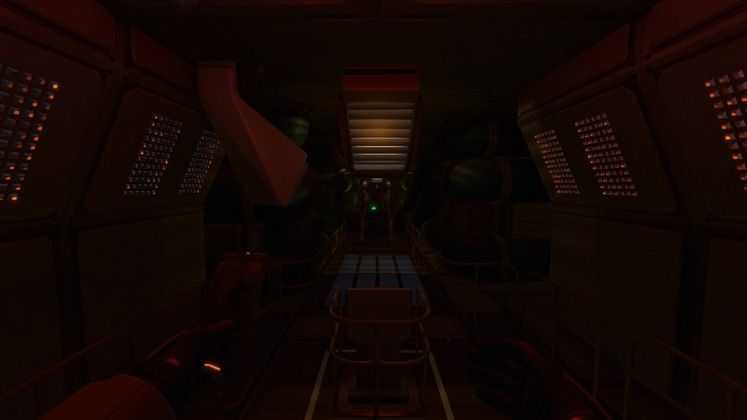 When I mentioned how the game feels like a VR title that also supports regular interfaces, I made that statement with the current amount of content in mind. Playing games in VR is a wholly different experience. In VR, holding surfaces to move through zero-gravity, simply grabbing and throwing items, moving through an abandoned space-station like you’re ‘truly there’ in a much more immersive manner would bring with it inherently more entertainment value because it is being played in VR. However, the things that are special, new or interesting in VR are generally mundane and common gameplay elements when the VR is taken out of the equation.

Thus, had I played Horus Station in VR, I might approach its content shortage differently. Even so, if a developer decides to support both VR and traditional interfaces, they should adjust the game accordingly to be more fitting for all platforms the game is available on. 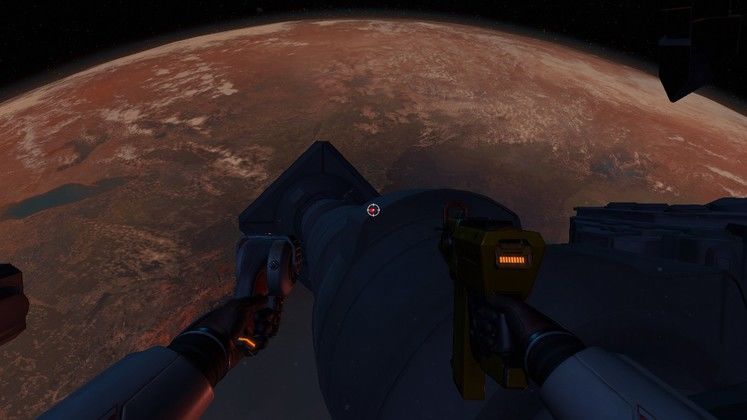 The story. There isn’t much of it in the preview act, but as a sucker for abandoned space-stations, I want to know what happened even if Downward Spiral: Horus Station isn’t doing much to pique curiosity on its own. 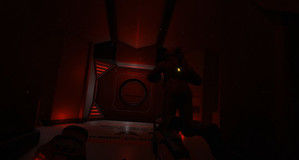 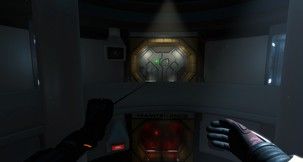