I dreamed a dream in time gone by

18 October 2012 | By Mark Seymour
When Valve announced the first fistful of titles advancing through its contentious Steam Greenlight process, among the Black Mesas and Project Zomboids was a little known game called Dream.

To many, Dream would have looked like another beguiling riff on the 3D explorative/adventure breed recently characterised by Dear Esther. But the three Huddersfield university students developing Dream under the banner Hyper Sloth of are quick to play down the similarities between the two games.

Indeed, they tell me they've perhaps given the wrong impression with their trailer - a fey, enchanting thing that captures all the game's beauty and beguile but little in regards to how it actually plays. Regardless, it's helped earn them a coveted spot on Steam. And it's not hard to see why.

On first impression, the comparisons to Dear Esther seem fair. The preview build on show at Eurogamer offers up that immediate, familiar freedom, for one, and oh does it look pretty. Dream's world is one of mysterious caves, clifftop overlooks and dungeon-like labyrinths that, much like thechineseroom's title, are shot through with intrigue.

A graveyard set aside from the chaos of the labyrinths hints towards a personal story while the first-person narrative (currently relayed via curt on-screen text but, I'm told, soon to be replaced with voice acting) gradually claws you into the mindset of Dream's protagonist Howard Phillips - a graduate going nowhere fast. Though the story is barebones at the moment, there's already enough to plant the seeds of curiosity. Who are you, Howard Phillips? And why are there so many TV screens in your dream world?

It's a ponderous game, but there's more to it than simply pottering around an arresting world. Indeed, through the demo there are puzzles, text pick ups and even something resembling an enemy - although that's a rudimentary appraisal of a dark force tied to a story that is still very much under wraps - with the promise of an inventory, collectibles and horror elements too.

It's perhaps odd that the team site LSD Dream Simulator and Yume Nikki as their inspirations because it's not immediately clear during this early demo how either play into Dream's makeup. It's yet to embrace the all-out weirdness of LSD, in particular, but this is something Hyper Sloth is working on, with horror levels and smaller more bizarre sub-dreams all in the pipeline.

At the moment it's a warm, dust bowl of a world where TVs lie abandoned in clusters, propped up against rocks, where upended arcade machines offer a stark juxtaposition to the crisp natural world, and where an elaborate computer system is stationed within the heart of a complex series of caves. It certainly carries a dream-like quality.

That computer and the unpuzzling puzzle that stems from it forms the crux of the demo; the key to leaving the desert behind and moving on through Howard's enigmatic world. You can interact with it like a normal computer as well as tinker with various programmes and read through a collection of emails and documents. As a means of relaying exposition in a game as enchanting as Dream, it's perhaps a little inelegant, but it provides some welcome context to the demo. Howard's grieving for an uncle. He's obsessed with his dreams. And there's a smoke monster lurking somewhere nearby, naturally.

The computer's chief purpose is to take you up into the next world but before that can happen you have to brave a series of dark dungeon-like tunnels that stretch out from the computer terminal.

I imagine this gets the better of the majority of people playing the preview build. The tunnels are tough to negotiate with some 100-plus lights to switch off before the computer shepherds you off to new worlds. This large, claustrophobic network of corridors and dead-ends remind of a 21st century 3D Monster Maze, but capture little of what makes the rest of Dream’s world so appealing with few - if any - secrets to discover.

The caves are home to the smoke monster, too. There's a story behind the demo's only other life force but, really, in the caves its sole purpose is to send you back to the entrance should it catch you. It's more than a little frustrating, particularly when you're roaming through the sprawl of corridors in search of the last light with little in the way of guidance.

Leaving the desert area behind, the warm oranges turn to stark winter ivories. It's suddenly a place of snowmen and delight and free from the cheerless underground dungeons it immediately recaptures all of its initial allure.

A game like Dream is always going to struggle to sell itself on a gridlocked show floor, having to compete with the thunderous din of explosions, bass lines and roaring engines. It's a game that demands patience, quiet and plenty of time but even here, when the door to Howard's bedroom first topples over to reveal a world that is yours to explore, it captures that frisson of excitement that games like Dear Esther and Proteus thrive on; that spark of intrigue and delight tied to all the possibilities - or all the secrets - wrapped up in a world that isn't just some pretty cardboard backdrop there to afford an inkling of life to yet another shootout.

And while Hyper Sloth are commendably looking to strike out from the shadow of Dear Esther and its ilk, at this stage - three months into its creation - it's certainly not bad company to be keeping.

Most Anticipated Feature: Figuring out what all those TVs are doing stacked up in the middle of a desert. 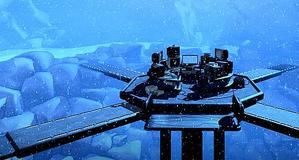