17 April 2014 | By Emmanuel Brown
If there’s a single upside to the recent deluge of unfinished titles flooding Steam’s Early Access, it’s getting the chance to see a game flourish and change its form under the weight of community feedback and fluctuating developer aspirations. It’s a peek under the hood that we rarely get to see on this side of the fence, with titles as diverse as Prison Architect, Project CARS and even the much-maligned Peter Molyneux joint GODUS all benefiting to various extents from pre-release attention.

Fight the Dragon is hoping to ride a similar wave. The developer is billing it as a small-scale hack-and-slash 3D action game played from a rotatable Gauntlet-style overhead perspective, with the main twist coming in the form of a suite of creation tools that should allow end-users to create their own worlds and adventures, eventually releasing them to an in-game content library that everybody can access. A LittleBigPlanet for the Diablo world then - although hopefully filled with fewer virtual dongs.


Booting it up, it’s easy to see the likes of Minecraft and Torchlight holding significant sway in the design. This is a universe made entirely of blocks, with basic but functional character animation and low-res texturing making for a distinct visual style that shouldn’t be too taxing on lower-end hardware. Your created character emerges from their log cabin home at the start of each session, and from there they can access various gameplay menus on-foot. Options for “Create”, “Customise”, “Online” and “Adventure” are available at the beginning, joined later by the “Loot Shrine”, “Dragon Arena”, and “Heroes Graveyard”.

Jumping straight into Adventure mode starts you out on a grid of selectable tiles. Each of those tiles contains a crowd-sourced level, with the first few tutorial missions being made by developer 3 Sprockets themselves.

Jumping into those reveals a basic hack-and-slash RPG with loot-gathering at its core. Your hero moves around with WASD, with left and right clicks mapped to light and heavy attacks, and a series of special moves accessible on 1-4. Strength and stamina meters govern your life points and ability to swing your sword, while a further “Rage” meter acts as mana for those aforementioned special abilities. Basic movement and attacking is floaty but instantly learnable; although it is a little lacking in feedback thanks to the absence of much of the combat audio in this current build.

So you wander, click, attack, and click some more. It’s not quite as simple as pointing your mouse at the next soon-to-be corpse when unleashing your special moves however, and you’ll have to consider lining up your hero to make sure your target gets the business end of any magic. Damage indicators give you a good idea as to your effectiveness, and the inventory system allows for the quick changing of weapons, shields, helmets, boots and all the other usual RPG trinkets that’ll maximise your offence and defence. Colour-coded loot is available everywhere, springing forth from chests and enemies alike.

It’s fun stuff to simply click through waves of enemies at the moment, and although there’s not a whole lot to Fight The Dragon’s combat and exploration (and the collection of user-generated levels are definitely hit and miss), there are certainly a few promising green shoots springing forth from its gameplay systems, hinting at further depth to come.

Most of the gameplay mechanics are basic but functional, so the best levels make use of all of the available environmental triggers to craft more interactive and puzzle-based levels than the usual combat corridors. One more memorable level saw me triggering pressure switches with barrels to open a series of interconnected doors attached to obstacle-course style passageways (jumping and climbing is performed automatically by simply holding a direction), while another branched off into a mine, with two different paths with different sets of enemies and bosses holding the keys necessary to unleash the final third pathway to the exit.

You’ll also gain XP and level as you travel, with persistent character stats for each fighter you chose to create. That persistence allows you to build your gear to the epic proportions required to “Fight the Dragon” in the main menu.


The dragon itself is a ridiculously powerful beast with its own damage-based leaderboard populated by anybody that takes a stab at its life, although you have to earn your way to each attempt by completing regular levels and picking up scrolls that act as a single entry ticket. I wasted three of those yesterday evening without so much as damaging a single fiery scale, so I’d expect months rather than days of gameplay before you’ll be able to sink your sword and call yourself victorious.

Looking elsewhere, although online co-op is fully implemented (and prone to a little lag at the moment), I suspect the majority of players will spend those months tooling around in the world editor.

Fight The Dragon’s suite of creation tools is the second major pillar of its design, and it is - for the most part - superbly easy to get to grips with. Levels are generated out of blocks and then objects placed on their surface, which is a process that’s as simple as selecting the texture or unit you’d like, and then clicking on an area of the world to spawn it. From there it can be rotated or tweaked with simple keyboard commands, and terrain blocks can be quickly laid down by simply dragging the mouse out to the desired area, and raised and lowered with a quick stab of a button.

It’s swift, intuitive stuff, and I was able to get a basic corridor level up and running, complete with an NPC, a working door, checkpoint, walls and a finish marker all within the first 30 minutes of dabbling. Also rats, lots of them.

Some basic logic gates and NPC scripting currently flesh out the available level design mechanics, and the more complex user-generated levels currently cropping up in adventure mode are testament to that limited but welcome flexibility. There’s plenty of scope to improve the variety of objects, enemies, NPCs and scripting options, but the basic flow of the design interface is to be commended. It’s easy to drag and drop, and a working prototype of your idea can be generated in a short turnaround.

On top of getting the basics right before rolling out their Alpha, there are also many other positive signs that Fight The Dragon is being led through development in a sensible fashion. User-created levels already have a rating system in place to hopefully sort the good from the bad and shunt excellent content to the top of the pile, whilst a reporting system is also included to cut down on the rubbish (including my own “Trials of the Rat”, for which I can only apologise).


Most importantly however, this is a team that’s evidently listening to end users and crowd-sourcing suggestions and solutions. A quick glance at their Steam discussions reveals a list of fixes and new features to be worked on, whilst the developers are actively engaging their audience and asking the right questions about potentially problematic areas such as banning users for inflammatory content, creating exploit levels or simply crafting things that are terrible (raises hand).

If they continue in that fashion and gradually build up content and features over the next few months, Fight The Dragon will turn out to be an interesting take on the Action-RPG genre. It’s a little light on quality and polish at the moment, but that’s Early Access for you. This is one project that’s at least crowdsourcing well, and listening to the feedback of its users; all of which makes it not a bad time to get involved. 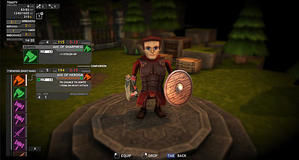