January is usually a month when new releases stay on the back burner, giving gamers time to recover from the busiest period of the year and maybe even battle their ever-growing backlogs. But that doesn’t mean we won’t have new games to look forward to, as developer Clever Beans is releasing Gods Will Fall, its first foray into multiplatform territory and an opportunity for it to get back into making its own IP. Earlier this month, we had the chance of participating in a hands-off preview event during which we saw gameplay and learned more about the upcoming action rogue-lite.

Gods Will Fall is a single player game aimed at players who enjoy putting in the time and effort to get better in order to progress, like in Spelunky and the Souls series. You have in your hands the fate of a ragtag band of Celtic warriors tasked with killing all the gods. Weary of the deities’ demands, the clans united, sending an entire fleet against their masters, only for it to smash against the rocks prior to even reaching its destination. You’re then left with just 8 warriors that you’ll have to guide through failure and unto victory in each playthrough.

You’re free to explore this island at your leisure, as it’s the only area in Gods Will Fall with no immediate threats. It also houses the stone doorways leading into all of the game’s 10 dungeons, each acting as the realm of a different god. You don’t know which god is behind each door when you first start, nor how difficult they are, adding an element of surprise and risk. You’ll also find a handful of hidden extras spread around the island if you’re particularly keen on exploring. Its main role, however, remains that of a level select and place of rest in between dungeon delves, as it lets you assess the state of your warriors. 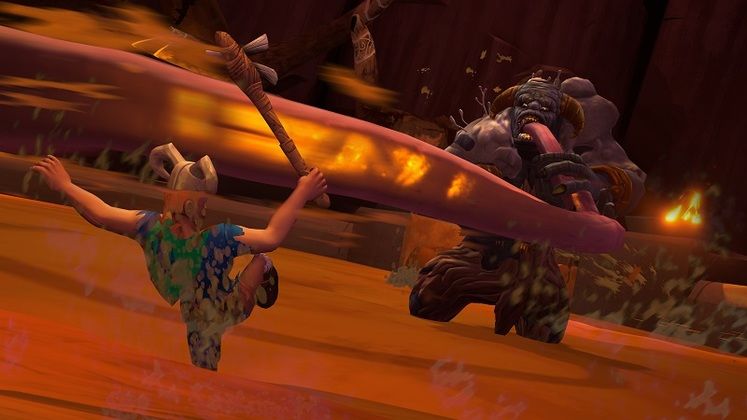 Each of the gods’ realms is handcrafted and unlocked right from the start, but there are also elements that vary with new playthroughs, like the total amount of enemies and the composition of each pack you battle. Vassal enemies and creatures created by the gods actively seek to put an end to your attempt of reaching their masters. The dungeons themselves can also surprise you with large drops or traps that you need to look out for and preferably avoid. At the end of a dungeon, waits the god or goddess themselves. There are no checkpoints in between and nowhere to hide or catch your breath – it’s all a crescendo leading up to the big battle. Some enemies and challenges are reserved for Gods Will Fall’s hardest difficulty levels, so you won’t see everything during your first run. Each dungeon also has its quirks that can help or hinder you, like forges that can upgrade or downgrade your weapon based on pure luck. New playthroughs randomize dungeon difficulty, so those which you previously breezed through can easily claim your warriors the next time around.

And your fighters will inevitably fail before all ten gods meet their end. It’s part of the game’s rogue-lite DNA, after all. The way it works in Gods Will Fall is that when heroes run out of Vigor, they collapse, remaining trapped within that dungeon. You can then send another warrior to see if they fare any better or move on, leaving the fallen behind. The failure of one warrior can ripple through the rest of the group, inspiring or demoralizing the remaining members.

If your entire band gets captured, it’s game over. Should a warrior succeed in vanquishing the dungeon’s god, every trapped ally returns and your band regains lost strength. Permadeath, too, is a factor: if your warriors fall to specific boss attacks marked by a red outline, saving them is no longer possible and you’ll have to make do with a smaller pool of fighters, even if you obtain vengeance. When you enter a dungeon, a series of orange dots in the right corner gives you a first idea of what you’re up against. They act as the Gods’ health – which is determined by difficulty – and, interestingly enough, clearing out enemies weakens the health and damage of the big bad waiting at the end. 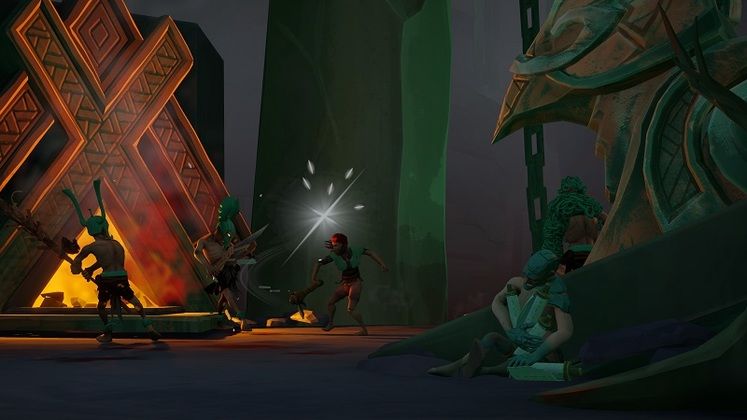 Although its core task of ridding the world of its deities remains static, Gods Will Fall doesn’t tell the same fixed story with every playthrough. Your failures, choices and successes as a player determine how the game’s systems build the tales of your characters. You always get a different band of warriors when starting over. Some of them will be complete greenhorns while others come with skills, past experiences or maybe a weapon that gives them a leg up in fights. Pushing through their quest, they end up bonding or harboring grudges. Some may want to seek revenge on the god that killed their newfound buddies or become terrified of the foes they’re about to face.

Only one warrior can enter a dungeon at a time, and you’ll have to choose the best fit depending on their stats, state of mind and weapons. You might have someone who’s eager to murder a god but their weapon might not be as strong as another warrior’s who is plagued by terrifying visions of that realm. Once you’re in, there’s no way of getting out aside from killing the god or falling in battle. When one character emerges out of a dungeon, the party greets them and celebrates. When the door opens without someone coming out, silence engulfs the scene. The characters’ skills and stats increase and change after each dungeon delve and you also get weapons and items which you can hand out among your party. 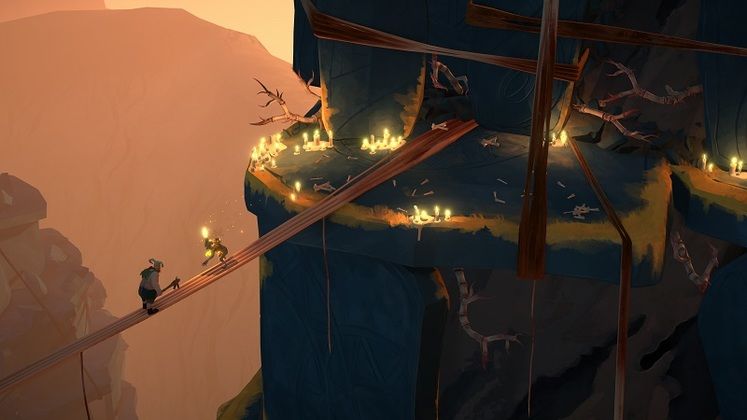 The pre-recorded gameplay we saw featured four areas: the tutorial cave, Osseus’ Bone & Sinew realm, Morrigan’s War realm, and Bellenos’ Wicker realm, all played on an easier difficulty level. What’s immediately obvious when stepping inside is how the combat system doesn’t rely on complex combos. Instead, it takes a more straightforward approach, focusing on quick light attacks and slower but more damaging heavy attacks. Your warriors can also parry, grab and throw enemies off cliffs, pick up weapons from the ground and hurl them at foes, or dodge out of harm’s way. As you venture through the gods’ realms, you may discover helpful items that grant additional abilities, like summoning spikes from the ground to impale enemies in an area. A straightforward system doesn’t mean it’s lacking in nuance, though. Long spears can keep you further from the enemy, which is something that a regular sword doesn’t do. At the same time, they may work well against slower enemies than quicker ones. If you plan on trying out the heavier weapons, you’ll need a bulkier warrior.

The Roar system is then tied into all this. You can earn back health by throwing yourself into battle, being encouraged to push on. This generates Bloodlust as you deal damage or parry attacks. At any point, you can unleash a Roar, using gathered Bloodlust to replenish that amount of your warrior’s Vigor. You thus stand a chance of returning from near death and coming out alive at the end of tougher sections. Replenishing larger amounts of your Vigor bar does put you in danger but also grants temporary combat buffs. This is complemented by how the more bloodlust you have on your Vigor bar, the more of it you gain as you attack or parry. 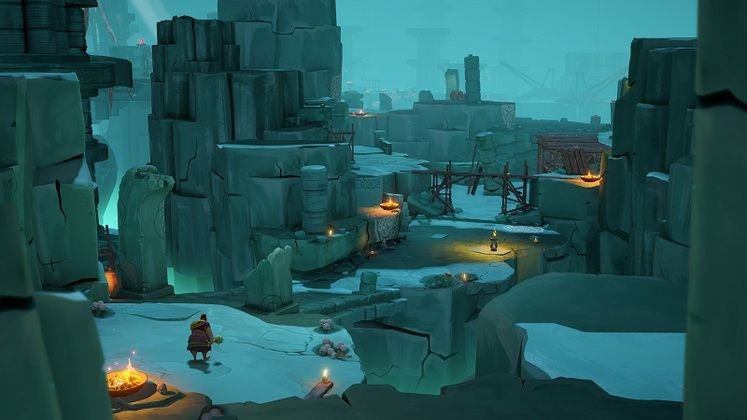 The deities you face in Gods Will Fall are not actual Celtic gods but do take inspiration from them and their ties to nature. Each god has its own lore and backstory stemming from the fact that they essentially created the world, which fuels their demands for humans to serve them. Osseus created bone and sinew and considers them on loan to humans. Morrigan resides in the former God of Steel’s forge, where she was imprisoned and forced to use her power of wind to craft weapons before dealing with her captor. At a certain point in the dungeon, you can even catch a glimpse of his body. Bellanos created the Sun and thinks that anyone who “uses” it owes him just about everything. They’re not exactly a fun bunch, as you can probably tell.

Although you’ll spend most of your time in dungeons, Gods Will Fall won’t have you continuously navigating dreary caves and dark underground tunnels. Going fictional with the gods fueled the creation of worlds with different aesthetics. The three on show during the preview – while perhaps a bit too yellow generally speaking – reflected their masters quite well. The way to Osseus takes you along a shore with pathways between grey rocks that end up leading you through a landscape dotted with trees made of bone. Morrigan’s dungeon starts as a traditional cave that opens into areas which see you moving across mesas linked by tight natural bridges and the occasional massive sword. Its interiors are lit by torches, the occasional gust of wind coming in and making enemies more dangerous and everything eerily atmospheric. You battle Bellanos in a field of wheat encircled by flames, fitting his solar nature. 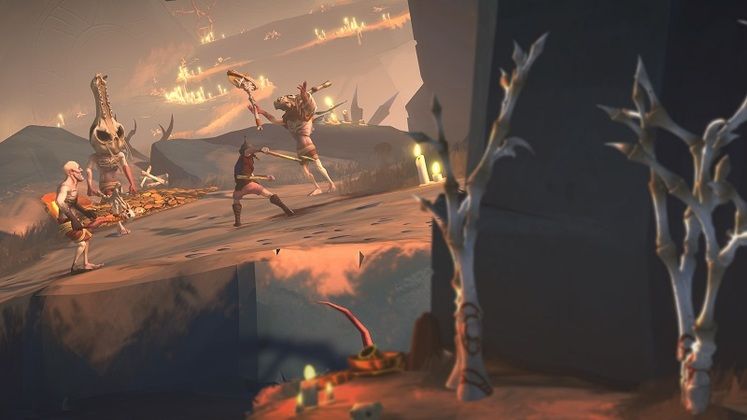 Gods Will Fall uses a “brushy” art style that comes from the game’s first prototype and the concept art used to create the game’s Knowledge dungeon. Developer Clever Beans took the concept art structure and brought it to life it using standard rendering techniques initially, only to give that up. Instead, the game got its final visual identity when the team aimed to recreate the concept art as it was, without being confined by realistic lighting.

Gods Will Fall doesn’t seek to reinvent the wheel but its parts could end up creating a sleeper hit. The narrative systems that gradually forge relationships between characters as they fail and succeed have lots of potential to drive interesting individual stories that extend into gameplay through buffs, nerfs and changes in attitude. Its subtle art style isn’t immediately striking but does make you warm up to it the longer you spend in its world. Naturally, a lot hinges on how smooth and tactile the combat will feel and how well developer Clever Beans balances difficulty and the frustration that’s often inherent to rogue-lite games. We’ll see exactly how that works out when Gods Will Fall launches on January 29, 2021. 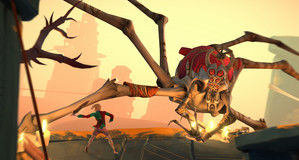