23 June 2011 | By Alex Donaldson
If I had to pick a descriptor for Hitman: Absolution, it’d be bad-ass. While the game wasn’t playable at E3 2011 – it’s a 2012 game and likely more than a full year away – everything I saw of the live demo played by one of the development team looked utterly brilliant.

To be clear, I’m a Hitman fan. I wasn’t a huge fan of Kane & Lynch, IO’s diversion from the Hitman property early this generation, and I was actually kind of dismayed when they chose to develop a sequel to that game rather than another Hitman. Now, though, the reasoning seems pretty clear – they were waiting until they knew they could do this right.

Red-tie wearing Agent 47 is back and looking better than ever thanks to the new Glacier 2 engine which was designed from the ground up for use with this new Hitman game. In the demo, I saw rain, thunder, sprawling city skylines, claustrophobic, dark corridors with harsh lighting – perfect for stealth takedowns – and even a train station jam-packed with tons of people. It’s clearly a pretty diverse engine.

The basic precepts of the gameplay will be familiar to fans of the series – you’re afforded a great degree of choice in levels, so you can tackle a situation by heading in guns blazing or be a proper Hitman and be in and out without anyone noticing. We saw a bit of both in this demo, which was nice.

Agent 47’s big new trick is ‘Instinct,’ which is easiest compared to Batman: Arkham Asylum’s ‘Detective Vision’ – a press of a button turns the colours of the environment on their head, and suddenly 47 can see through walls – or at least see rough silhouettes of exactly where his enemies and prey are.

Lines of fire indicate the patrol paths of searching policeman, so the player is easily able to see that a cop is heading right for them and adjust their hiding place accordingly as quickly as they can. 47 isn’t always equipped with weapons – in this demo he has to steal a cop’s baton at one point, while at another a big marble bust is used to practically crack an enemy’s skull open – a lot of things in the environment can be used to your advantage.

I was assured the mission can be played a ton of different ways, but in my demo 47 was also able to sabotage a fuse box to plunge the building he was in into darkness. With his hands on a gun the influence of Kane & Lynch is clear – the gritty way in which guns sounded and handled in that game returns here, with guns sounding suitably violent for a game about an assassin.

Too many games go ‘big’ with gun sounds – massive booms and bangs with loads of echo. While guns are loud, the sound of a real one is somewhat shorter, sharper and more jarring than most movies or games point out, but Hitman captures that and the loud cracking of 47’s pistol as he nails a cop in the chest 5 times is enough to make me flinch a little.

IO are having some fun with this game, too. Hitman’s a game with black humour, and that’s the same here – one minute we’re laughing because 47, dressed as a cop, busts into a house which is a forest of marijuana plants. The stoners inside panic, and begin trying to flush the plants down the toilet. Another offers him a bong – it’s a funny scene, but then as the real cops arrive it turns nasty, 47 slamming the bong into a cop’s face and making a run for it as they recognize him.

Everything I saw of Hitman: Absolution left me excited. Its early days, but after two lacklustre showings in both Kane & Lynch titles IO seem ready to deliver the experience they’re likely to be remembered for this generation.

Those fearing Hitman would get the ‘Conviction treatment’, turned into an action-fest for the COD fans as Splinter Cell was fear not – there was an awful lot of awesome looking stealth and choice in that demo. I’m very much looking forward to seeing more at GamesCom. 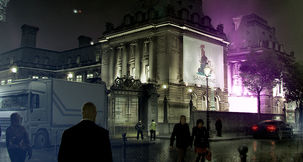 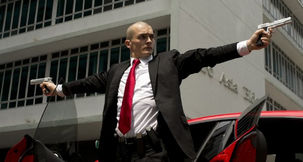