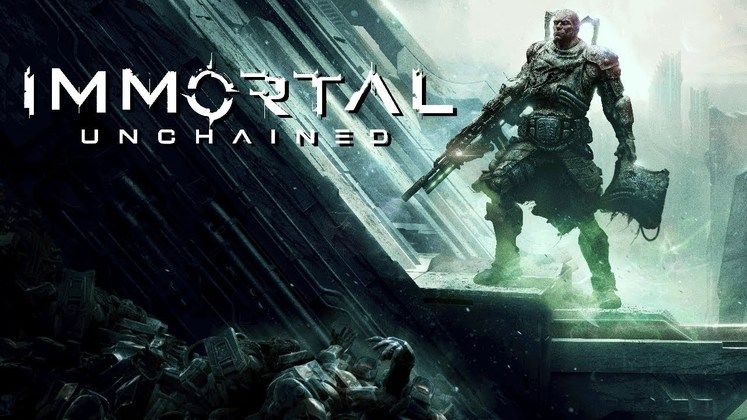 Immortal: Unchained is forcing me to commit not one, but two of the greatest travesties a video game journalist could commit. Not only must I invoke the name of that one game absolutely everyone mentions when a game is somewhat difficult, but I must also liken it to said game by adding “but with guns” to it. Don’t worry, I’m typing up my resignation in the other tab.

Alas, Immortal: Unchained tries so very hard to not just be like, but outright be Dark Souls with guns and a coat of sci-fi paint, down to the typical strafe and dodge based gameplay, the save system, the lack of pause, the RPG elements, the opaque delivery of the ‘story’ and the level design that there simply isn’t any better way to convey what this game is like. We’re not invoking Souls because we died a couple of times, but because almost every mechanic has been lifted nigh verbatim from those games.

You begin the game by waking up in a prison overrun by undead where you get your grips with the game. You, an Immortal, who has been Unchained as evidenced by the shackles on the floor of the starting area, need to whack your way through techno-zombies as you navigate the corridors of this prison. The game helpfully reminds you that playing with a controller is recommended, and I did just that, but made sure to try things out with mouse and keyboard - more on that later.

Primarily a shooter, Immortal relies on a lock-on mechanic which can be toggled. When on, it will glue your reticule to any enemy that wanders into your lock-range, and stubbornly stick to that enemy even if there are multiple, with no way to switch targets. Deactivating lock-on, free-aiming at another bloke and then locking on will whoosh your screen around to whichever enemy the game prefers, with little logic, as it isn’t determined by proximity either. 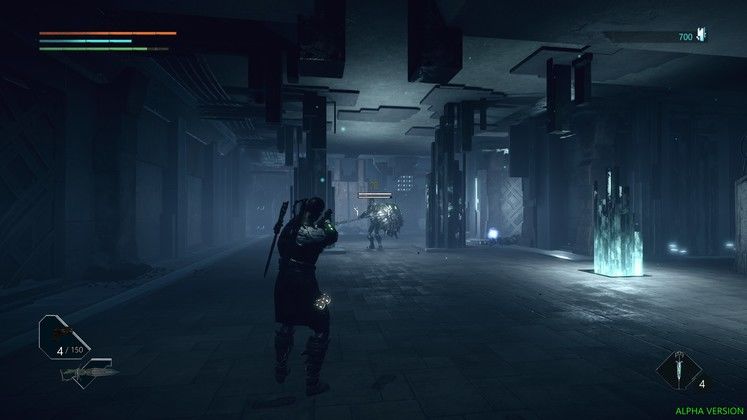 This enemy packs a shield, meaning you'll need to get behind him

Anyhow, when locked on, you can switch targeting between various body parts, and hitting those will have different effects. Shooting the gun hand off will remove ranged capabilities of otherwise ranged enemies. Shooting the other hand off will debuff their accuracy. Shooting the legs will have them stumble, while shooting the head has a damage multiplier and depletes their stamina. Shooting the torso is the default target and offers no bonuses, but is the easiest to hit - and damn, are weapons in this game bloody inaccurate. You also have melee weapons, which are often useful when up against a sole ranged opponent, as they can’t aim worth anything when you’re up close and their melee attack animations take so long to complete that you’ll kill them before they have a chance to retaliate.

Enemy AI isn’t terribly bright, so the combat becomes less challenging as you learn how to exploit them. If a ranged enemy notices you, they simply stop moving. They’ll become rooted to whatever position they were in upon detection and shoot in your direction regardless of what kind of cover you put between them and you, turning firefights into a waiting game of letting them shoot the pillar or box or whatever you’re hinding behind, pop out, and shoot at them until you hide again as they let out a volley. Immortal more often than it should feels like a puzzle game, with each encounter having a specific solution. 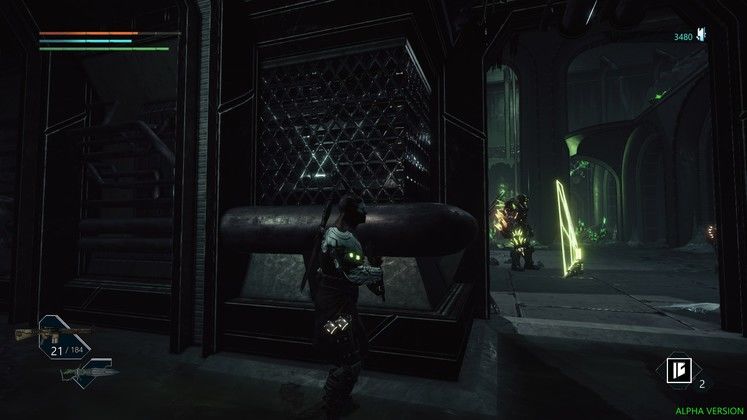 You progress in the game, the enemies get the jump on you and you die while pinpointing their locations, then on your second run you just position yourself in the most ideal place to pick them all off. Maybe you need to sprint from cover to cover after killing bloke A, melee bloke B, circle around and shoot bloke C. Oh no, you’ve taken one hit too many, might as well just die and get it right next time. Ammo is also relatively scarce which becomes an issue due to the inaccuracy which necessitates a lot of shots for each enemy. Eventually you’ll be faced with the choice - do I press on with my low health and ammo chancing that you’ll bump into an Obelisk sooner than an encounter you can’t win, or head back to your previous Obelisk in the hopes that the stats you upgrade with your bits and knowledge will help you get through all this again in a better status.

Bosses change things up by taking cover out of the equation, but those encounters just amount to dodging a lot and learning the pattern of the boss. Sure, timing and stamina management is also needed, but again it feels more like a timed puzzle than a boss fight, where one mistake too many will require you to start again even if you haven’t died. A few deaths at first to learn the hitboxes, patterns and timing are usually needed, then it’s down to your own reaction time and how long you can maintain your tactic. 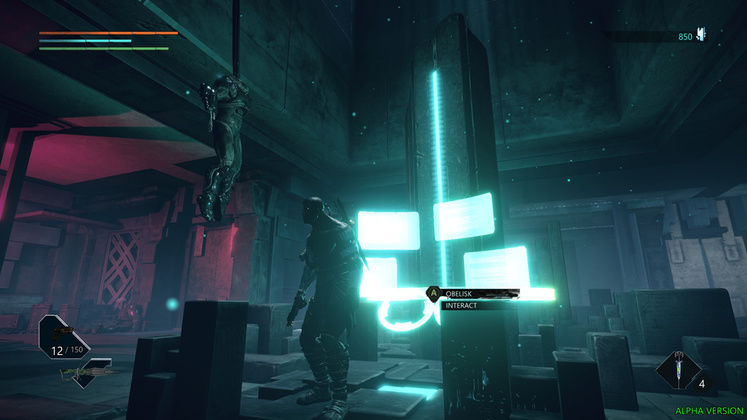 The game can be saved whenever you interact with an Obelisk, a tall black… thing which has holographic screens all around it. This is also where you distribute your “bits”, a form of currency, to level up and also to manage your weapon loadout. While there is an always-accessible inventory in the game, only consumables and flavor-text fluff collectibles can be used. Activating an Obelisk also respawns all killed enemies, and respawning at one after a death will do the same.

Immortal: Unchained’s level design both encourages and punishes exploration. While going off the beaten path might lead you into a cheaply disguised spike-trap or an enemy hopping out of an nook you can’t see and getting in a hit or two before you react, it is also the best way to discover hidden loot, armor shrines - there is no equippable armor in the game, rather your outfit is upgraded both visually and in terms of stats each time you find an armor shrine - and little collectibles surrendering yet another small crumb of world-building.

Whenever one of these traps or enemies kill you, you’ll be revived at the last Obelisk you’ve interacted with relieved of your bits. If you return to your place of death, you may retrieve your lost bits, and otherwise gain them by killing enemies, finding batches of “forgotten bits” which are small blue glowing puffs, and by looting caches of bits. With bits, you may upgrade a host of attributes such as your standard RPG serving of strength, agility, perception paired with some less common ones like finesse. These don’t only determine stats, but also what weapons you may carry, as some of the better guns you’ll unlock along the way have attribute requirements. 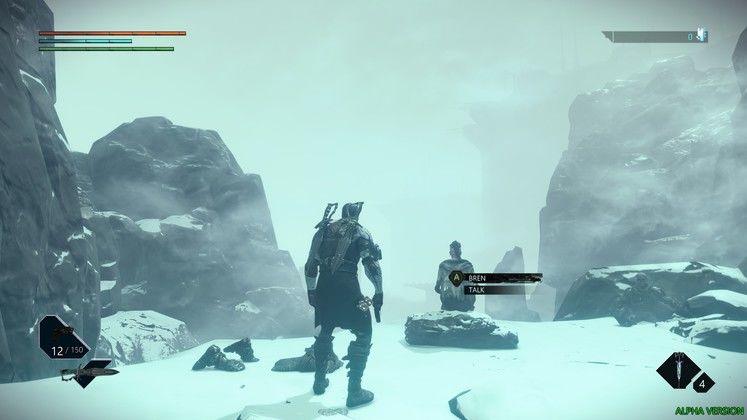 Nope, she won't tell you anything pertinent either

The storyline is kept deliberately opaque - the trailer and game description tells us that the Immortal is a specially designed weapon to stop some kind of apocalypse, and that he has been unchained precisely to do so, but the game itself has revealed none of this, nor anything else pertinent. What few scraps of exposition I’ve scavenged were all immaterial to the situation at present, revealing background info about my current location or some bit of mythology. While there is merit to this approach, motivating players to look around for more scraps and try to decypher the world presented to them, but it can also lead to a lot of potential players bouncing off by the lack of any reason given as to why we should bother with any of this.

As far as I’ve progressed, enemy types haven’t been terribly varied. Mechanically, you have your regular shooty grunt, your melee grunt, your sniper grunt and big, bulky heavy-attacking grunt. Design-wise they’re all techno-undead with overly busy designs of jagged grey flesh infused with jagged grey metal bits and glowing lights, however they’re usually too far away to make out details, upon dying dissolve instantly and if they do get close either you let them kill you while trying to get a look at them, or the motion of both their and your animations will blurr stuff up.

The game’s visuals get the job done, there are no performance issues and I don’t think you need too beefy a rig to run this on maximum graphics in a stable manner - my GTX 980 and older i5 maintained a solid 60 fps with everything cranked up. The animations could definitely use some work, and some props are a tad floaty, but then ironing stuff like that out is what Alphas are for.

Immortal: Unchained does not yet have a release date, but is slated for launch sometime in 2018 on PC.

Overall, Immortal: Unchained is, in spite of its flaws a fun game thats presents us with a different kind of entertainment than I’d expect from a game of its genre. I’m usually wary of games that I feel waste my time, and on paper Immortal does precisely that, however there is fun in trying to “solve” the encounters, explore the maps to find new loot and so on. However, the game relies above all else on ideas from other titles and brings very little to the table creatively speaking. This makes it difficult to really attribute the positive aspects of the game to the game itself. 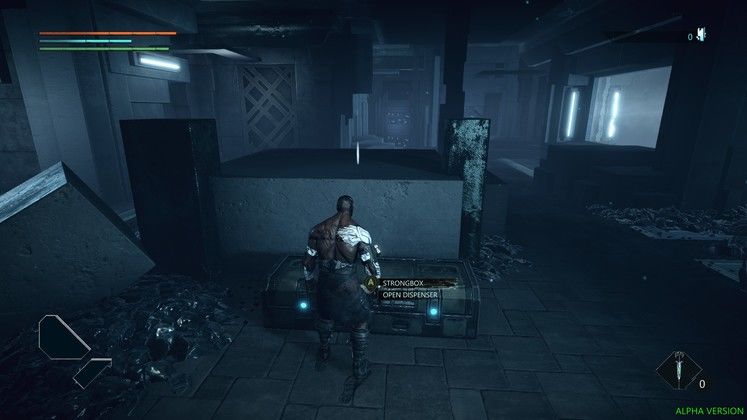 Hopefully some of the later boss battles will shake up the mechanics and familiar flow of the game with some clever solutions, breaking the typical dodge-heavy mold we see early on in the game. 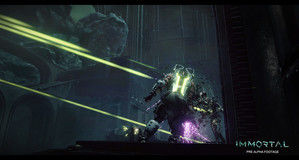