Turn-based strategy and CCG come together

The way I feel about Labyrinth is the way I feel about Rocket League. Why hasn’t someone designed this concept earlier? It’s so simple. Take a turn-based strategy game and replace the commands with cards. Now you’re playing a turn-based strategy card game! So simple. This is, basically, what Free Range Games has created while also taking inspiration from Magic: The Gathering and Hearthstone. You have three characters you can bring into each raid and each one has a specific discipline. There will be 16 when the game launches. As of now, I’ve seen four. Once you’ve chosen your character, you can customize the card decks each has.

Turn-based strategy and CCG come together.

Each character has cards specific to their discipline but there are universal cards any character can use, as well. You can only hold up to 30 cards in one deck and so far, that has been enough. I’ve either lost or won the raid before that happens. Once all your characters and decks are chosen, you hit the battlefield and from there, you and the enemy alternate turns. You move like you would in Fire Emblem but all the gameplay is based in the cards. There are attack, defense, buff, and healing cards and just like a card game, you’ll want to make sure you have a steady flow of what you need. Though each character always has one card that is always there just in case.

The game is in very early development but what Free Range let me play looks very promising and appealing. It will be interesting to see how they tackle the nuances of movement when players begin to figure out high-level strategies. But as of now, Labyrinth looks like a game that could last for many, many years. 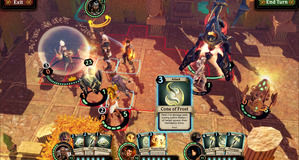