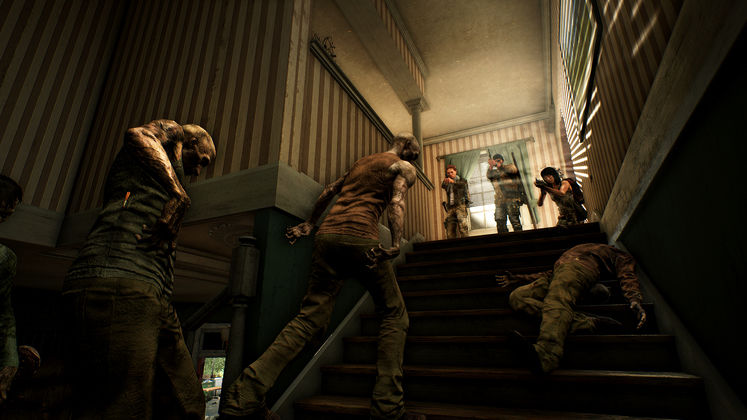 Over the weekend we had a chance to go hands-on with Overkill’s The Walking Dead game, the new co-op zombie-survival-shooter from the creators of Payday. It’s certainly been a long time coming, so we were eager to see just what the talented Overkill team could manage with Left 4 Walking Dead.

We had a big hands-on with the Overkill’s The Walking Dead beta and it’s two major modes, so here’s our full impressions. Just remember: everything you read below is based on a very early beta, and anything could change. 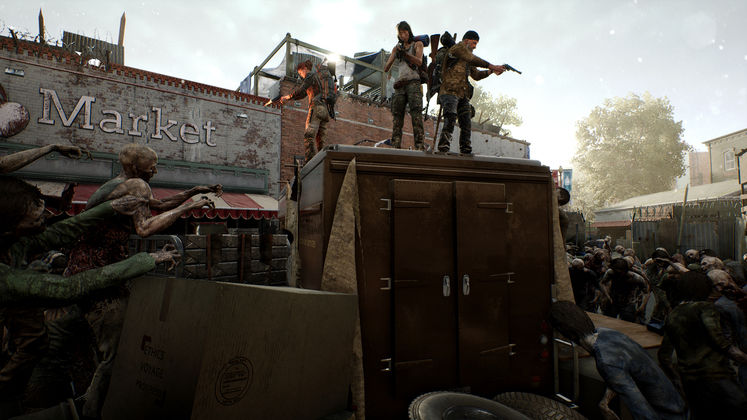 There are two major mode types in Overkill’s The Walking Dead, or at least in the beta - Camp Defence and Expeditions. Do not expect either of these to play like Payday, or Left 4 Dead. In Defence you’re holed up in a specific area, and you have to shore up your defences, lay traps, and if any gates break down you and your team better work quickly to put them back together. In an Expedition you have to head out onto the streets of Washington to gather supplies and undertake missions, while trying to avoid walkers and other gangs.

There are four different characters with their own abilities, although loadouts can be changed and customized (there were only a few basic weapons in the beta, though). There’s Aidan (tank, extra health), Maya (medic), Heather (scout, crossbow specialist), and Grant (sniper, quite blatantly Bill from Left 4 Dead). While you can have a team of all Aidans, you do have to use these characters and their abilities effectively or you will quickly get overwhelmed. 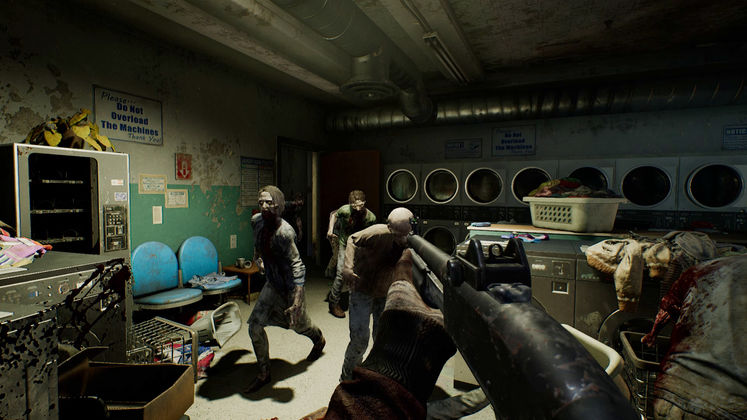 Defence is arguably the harder of the two. Frankly, it’s a pain in the neck right now. We had three gates and a semi-large factory area, points where we could stock up with ammo or planks, and we had to keep the gates shut and the walkers out. We failed, miserably, every time - and didn’t have much fun doing it.

Guns are pitiful, and regularly do nothing - I tried both a machine-gun and a shotgun and both were deeply unimpressive. Once the undead start pouring through a gate it’s difficult to get it back closed again - by which time another gate’s probably been busted open. Gates take several planks to fix, and you can only carry two at a time. Then there’s the idiots not going to the same objective, random moments when zombies will just down you even if you’re at full health, and walkers appearing from places other than the gates for some reason. 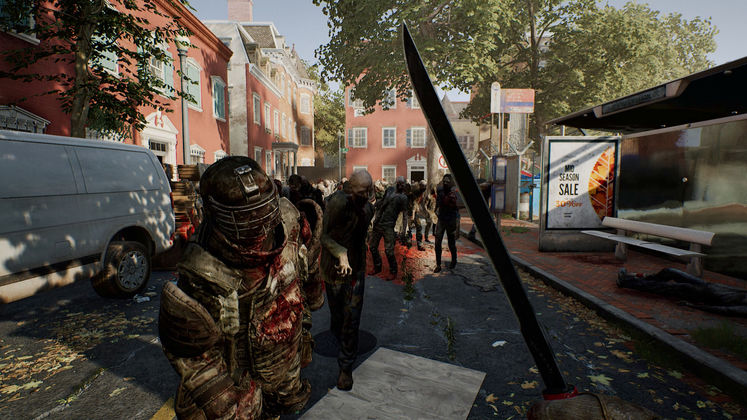 The Expedition mission was better, but still has major problems right now. Our goal was to find an enemy hideout and get our equipment back, but in practice it proved much, much more difficult. You have to sneak across town making as little sound as possible, because sound alerts the walkers. Which is clever, except no one told armed enemy soldiers that, who fire their guns non-stop as if their lives depended on it - it did, but still.

What made it worse is that we barely had any ammo for our guns, and as we found in the last mode, the guns were awful even with loads of ammo. You have to scavenge everywhere and everything, which was fine until the armed enemies started showing up and causing the walkers to swarm. And then the game was made more ridiculous and over-complicated by adding puzzles to the mix, which meant finding a bunch of random items to put together to make a mechanism to open a gate or whatever.

Overkill’s The Walking Dead is out on November 6th. Just a reminder again that everything we played was an early beta, so there’s still time for this all to be fixed. 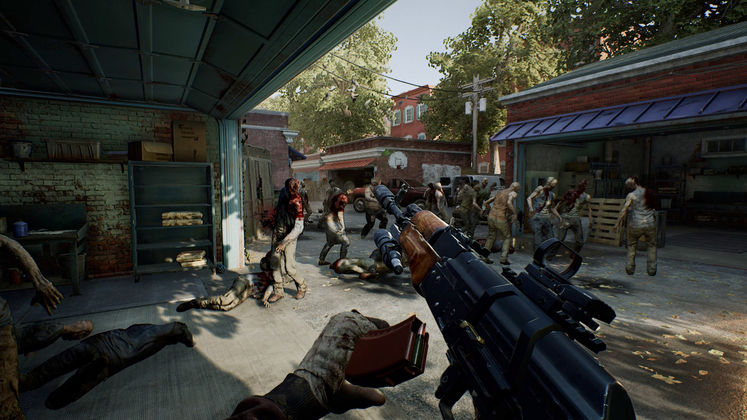 We were reminded a lot of Metal Gear Survive playing Overkill’s The Walking Dead, with its mix of co-op base defence against zombies alongside going out and scavenging for items. Walking Dead is different, but we’re not sure yet whether it will be better.

At the moment, the game isn’t that much fun. We literally did not enjoy our time with the beta at all, as it was either over-complicated - such as the silly puzzle traps you have to put together - or unfair. We appreciate that a Walking Dead game is supposed to be a little unfair - but when you have enemies firing wildly at you with infinite ammo, which alerts zombies, and then you scavenge their guns for 1 single bullet… it becomes videogame-y unfair rather than Walking Dead unfair. 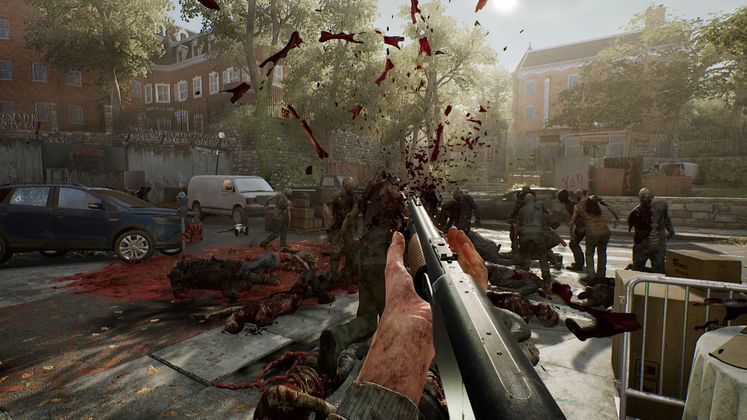 Defence was just a mess, with it being far too easy to get downed by walkers and too hard to get back up again. With ammo and planks being scattered about the map there was far too much running back and forth to get things rather than fighting the zombie hordes.

You know how in Call of Duty Zombies mode planks just appear if you go to repair something, so you can concentrate on fixing and killing zombies? You know how Call of Duty Zombies is fun? Overkill’s The Walking Dead isn’t fun. It’s currently focused on the wrong things, like collecting planks or silly find-the-item-nearby puzzles, when it should be focused on killing enemies, scavenging resources for your base and character, and getting to the objective.

There’s still time for Overkill to fix The Walking Dead as we only played an early beta, so it’s still in-development, and we only saw the smallest taste of the game - but it has to improve drastically for us to want to try it again. Did you try Overkill’s The Walking Dead in the beta? Do you agree or disagree with us? Let us know in the comments below.

The Expedition missions, if they can make them more focused, less over-complicated, and more fun. 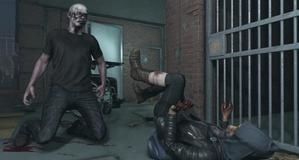 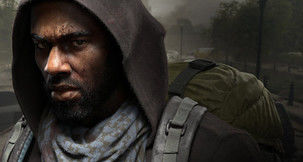 Overkill's The Walking Dead Will Be Pulled from... 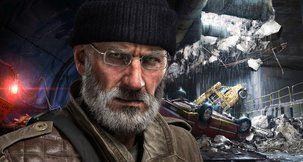 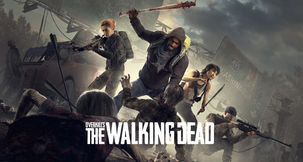