Please don't include the Werehog

11 October 2012 | By Mark Seymour
It's speed and not Mario Kart that I come away pondering having played the multiplayer ingredient of Sonic & All-Stars Racing Transformed. Transformed's tracks - each of them grounded in a popular SEGA franchise - whoosh by in a kaleidoscopic haze and while Sumo promise a handful of different speed classes, this is precisely how I take my racers. Knife-edge frantic with a side order of supersonic disaster.

Sonic & All Stars Racing Transformed is a crush of Outrun, Hydro Thunder and, obviously, Sonic All-Stars Racing. Its classic arcade racing leanings mean it's infatuated with speed, as well as physics-defying drifting, and as a result its exhaustive index of playable mascots (27, in total) feels like lovingly handled fan service.

That fan service pays off though, with a plenitude of lavish tracks that vary greatly and borrow more than just appearances from SEGA's repertoire of fan-favourites. Tracks bristle with absorbing detail and dynamically change mid-race; you switch between racing on land, sea and in the air in an instant.

We begin on the Super Monkey Ball inspired track Temple Trouble. It's a particularly befitting example of how the game's tracks embrace the spirit of the franchises they borrow from in more than just appearance. Temple Trouble immediately has us barreling down through Monkey Ball's familiar green and orange checked strips of floating land. I'm high-tailing it off the track within seconds, which is seemly; I never was any good at Monkey Ball.

In familiar fashion, tracks splinter off into different pathways with the more prickly gauntlets benefiting those with the poise, skill or bravado needed to take a gamble. Through Temple Trouble's less demanding routes, the track edges tend to fold up into walls - for which I am grateful. Regardless, by the time I've puttered across the half way mark of the first lap I've earned a pretty little sticker for careening off course and into the abyss three times. These tracks are nothing if not faithful.

Free from Monkey Ball's cruel sky-ways, the track tumbles down into a jungle watercourse. At this point our cars transition sumptuously into fully fledged naval transports - each of them unique. The transformation takes place in a nano-second, and it's almost sad that an entire department's hard work flashes by in a gust of morphing metal.

Vehicle handling in the water is a dramatic departure from land, and memories of Hydro Thunder are quick to make themselves known. Waves buffet my boat-car-thing altering its trajectory, and I have to wrestle with the damn thing to keep myself from being swallowed up by an angry vortex positioned awkwardly in the middle of a yawning temple room. It's a brilliant moment, though, demanding a do-or-die maneuver that gets the better of at least one racer ahead of me.

It's here that the importance of drifting is made clearest. Outrun is the obvious touchstone, and it feels a little unwieldy at first. It’s vital to get to grips with drifting because it not only affords you a speed boost, but also allows you to get around the need to ease off the accelerator in all but the harshest of harsh bends, and slowing down through the margins of a whirlpool is a tactic that'll end in tears.

The same can be said for vehicles in the air, which have a delightful weight to them. You can also roll and flip Wipeout-like for a brief turn of speed. More pertinently, rolling allows you to quickly reposition yourself after a jump or while in flight.

By the time the third of three laps comes round I've got a decent grip on the fundamentals and I've skulked into second place. I know which short-cuts to avoid, I know to keep right through the vestibule feeding into the vortex area and I've even remembered where a few of the boost pads are stationed. I have the memory of an elderly gadfly, but these laps are short enough that even I've cottoned on to their makeup.

Except this is Sonic & Co. Transformed, of course, and suddenly I'm adrift, negotiating a course I've never driven. It's Split/Second on steroids, shot through with all the bastardry of Mario Kart played with friends. The world has literally restructured itself in the space of a few seconds and I cannonball into the void with the grace of a rhino on rollerblades.

At the end of the first race I'm lovingly punched with a badge that reads seventh place.

It dawns on me at this point that I've hardly given thought to Transformed's arsenal of madcap weapons. These follow faithfully in the mould set by Mario Kart but are shot through with the kind of slapstick cartoon panache you'd expect from, well, one of those. Designer Gareth Wilson is quick to stress that all of the weapons can be evaded. There's no blue shell here.

I had a go at lining up a snowball (think Mario Kart's green shell) during Temple Trouble, but with the world roaring past in a harlequin blur I ended up kissing a palm tree, the snowball rolling listlessly off the track edge as my rivals tore by.

None of the more eclectic attacks really endeared themselves to me, either. I evaded my fair share of oversized wasps, curiously land-happy blowfish and even outsmarted a homing Micro Machines-esque thing co-opted from Mario Kart's red shell, but Transformed has earned my attention off the back of its merits as an arcade racer, not a kart one.

I imagine this all changes when you're sat on a sofa with friends either side, the balance then surely shifting towards the more traditional kart racing joys. So knocking your buddies off course with a well-placed snowball might be more rewarding than drifting perfectly through an uncomfortable veer in the road or timing a barrel roll to evade the gnashing jaws of a big beastie.

In a room full of strangers, that competitive spark isn't quite there but Sumo is certainly catering for those of a multiplayer predilection. The career mode in its entirety can be played four-player split screen, while traditional online races cater for up to 10-player and there are separate arena battles too (further proof the weapons are of more worth than I found during my short play). You can even take four-player split-screen online.

It might lack the immediate lustre of Mario Kart, but it's a testament to the quality of the racer grinding away beneath the chirpy mascots that I leave the hands-on session rapt by thoughts of high-speed capers and the arcade-racers of yesterday, and not that other kart racer. 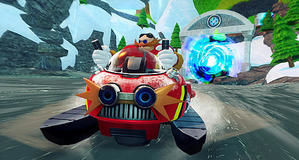 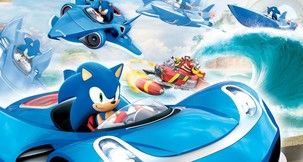