28 May 2013 | By Alex Donaldson
I’m a self-diagnosed sufferer of shooter fatigue. This generation has been shooter heaven; something that started out as an amazing, exciting proposition back when we got Halo 3 and Call of Duty 4 almost back-to-back but has become an increasingly tired slew of all-too-similar games as the generation has wore on.

Because of that, I’ll be honest and say that when I was about to see and play Wolfenstein: The New Order at a Bethesda pre-E3 event I wasn’t really all that excited. It speaks volumes of Wolfenstein’s attitude that I came out of my time with the game excited to see more – because tonally it’s a complete shift from where much of the FPS genre currently stands.


Strangely reverent to Wolfenstein 3D’s tropes, the game still stars William “B.J.” Blazkowicz, and is set in an alternative-universe 1960s where the Nazis won World War II with the help of some mysterious technology. B.J. has been out cold since the war, and when he wakes up, it’s a nightmare – his army and people are gone, and he is alone in a Nazi-dominated world. Naturally, he doesn’t accept that for long.

You’d expect the demo, then, to open with an insane shoot-out – but it doesn’t. B.J. is on a night train, sneaking his way across Europe when he encounters an older Nazi general and her young, effeminate boy-toy assistant. There’s a wonderfully tense in-engine cutscene as B.J. fetches coffee when the pair burst into the room with a couple of stooges and a massive, hulking Nazi mech.

The pair call B.J. over, and a tense, ‘Inglorious Basterds’ style scene plays out where the general probes B.J. on his beliefs, and if he is truly Aryan. It’s a nice little setup to depict the world of Wolfenstein; grim, yes, but also ridiculously over-the-top; where there’s a Nazi empire, there’s also gigantic, sci-fi looking mechs and larger-than-life characters.

Interestingly, the scene features a few simple choices for the player to make. The game to figuring out if B.J. is a true Aryan involves allowing him to pick from numerous cards laid on a table, and the player makes those choices - though it wasn’t made clear how differently the game or story will play out based on the decisions you make.

In this demo, at least, B.J. gets away clean, left to walk through the train gripping a tray of coffee to share with his lady companion. The dark coffee sways in the cups with each of B.J.’s steps and the natural sway of the train - and that’s one of many small visual touches that serves to show that the title is a step beyond most of what the current generation hardware is offering.

Wolfenstein is a cross-generational title - though confirmation of what next generation machines it’s coming for is left for E3, though we’d imagine they’re exactly what you’d expect. The version we see and play is one that is explained to be somewhere beyond the current generation but behind the next-generation. In short, Bethesda promises that the best versions of the final release will look better.

The result is a nice-looking game polished up with some interesting lighting and other subtle effects serving to help it look better than what we’ve become accustomed to on our current 7-year-old hardware. That makes it stranger still that some cutscenes inexplicably switch to pre-rendered sequences that still make use of in-engine graphics. These aren’t CG, but pre-rendered cutscenes created in the game engine with subtly different lighting that creates a strange disconnect between those scenes running live and those not. This is a problem I previously found jarring in Deus Ex: Human Revolution, and it’s just the same here.


With that slight niggle stated, it’s time to hit the bulk of our demo: gameplay. Wolfenstein is a single-player only experience, so this is literally your sole reason to buy the game - so I’m glad Bethesda were confident enough to put it in front of us for a full hour with a PC build of the game played using an Xbox 360 controller. As outlined earlier, I was left pleased by Wolfenstein’s self-aware, over-the-top attitude to blasting Nazis.

In an age of only carrying two weapons at once, cinematic sequences and staunch realism for the genre, Wolfenstein takes a swift look at those concepts and decides to leave them be, sticking to the sort of action that popularized Wolfenstein 3D in the first place.

Weapons boast multiple functions, such as a single shot or three shot burst, selected on the fly, and each weapon has a meaty, powerful sound to it that leaves you feeling like a badass. B.J. can dual-wield two of the same weapon, and can roll through combat encounters holding two shotguns that, by rights, should be impossible to wield together. It’s bloody fun.

One showcase weapon is a laser cutter - my first thought was Bond’s laser watch in GoldenEye - that can cut through certain materials in the game. It’s free-form cutting, meaning if you want to cut a smiley face (or something ruder) into a surface you can - a nice touch. At one point I cut open a box and found myself body armour at a crucial moment - and that was a pretty fantastic ‘eureka’ moment.

B.J. himself fits this tone perfectly - he’s characterized as an all-American hero cast from the mould of the likes of Rambo and Duke Nukem - and spends much of his time through the level quipping and mocking the Nazi foot soldiers he fights. After defeating a gigantic mech, he mocks its size and calls for a bigger one - and the Nazis oblige. At one point, he utters “Fuck you, moon” - because the Nazis have visited it.

It’s unclear exactly how far the game intends to take this facet of B.J.’s character, as such quips could get old incredibly fast - but they were pretty funny in the demo, and, again, refreshing from the constant stream of military hoorah that usually punctuates these sorts of games; B.J.’s attitude seems to exist to puncture that stereotype with another.


B.J. and the weapons feel as though they’ve tumbled out of the 90s, then, but so do other parts of the game - in particular, leaning is back with a vengeance. Pushing the left bumper causes B.J. to hunker down on the spot, and then pushing the left stick causes him to lean in that direction. Want to lean around a corner or over cover? You can. It becomes a key part of gameplay, a major part of avoiding taking too much damage at the hands of the overwhelming Nazi forces.

The game feels slick and responsive, but it really is that tonal difference that makes it stand out. With its over-the-top attitude Wolfenstein may well be the perfect antidote to the shooter fatigue I and many others are suffering from - and a perfect way to say goodbye to this serious shooter-heavy generation. I’m looking forward to seeing more as the game hurtles towards its late 2013 release. 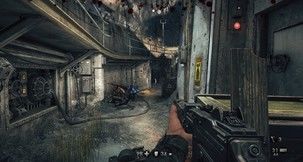 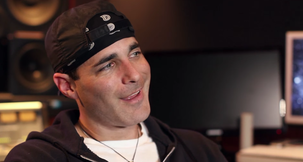 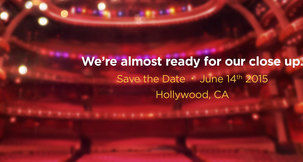