Journey into The Abyss

Abzû, when translated from the Mesopotamian tongue, means ‘primal sea’ and quite fittingly serves as the perfect approximation of the experience that it offers. Less of a videogame in the traditional sense and more of an extended episode of interconnected emergent moments, the team over at Giant Squid have fashioned something quite remarkable in Abzû.

Cast as a mysterious underwater explorer with the action unfolding from a third-person perspective, Abzû asks very little from the player as it lets an ocean kingdom and its denizens unfurl in front of them, any sort of bespoke handholding or obvious signposting being relegated to distant memory from other games that have relied upon it. 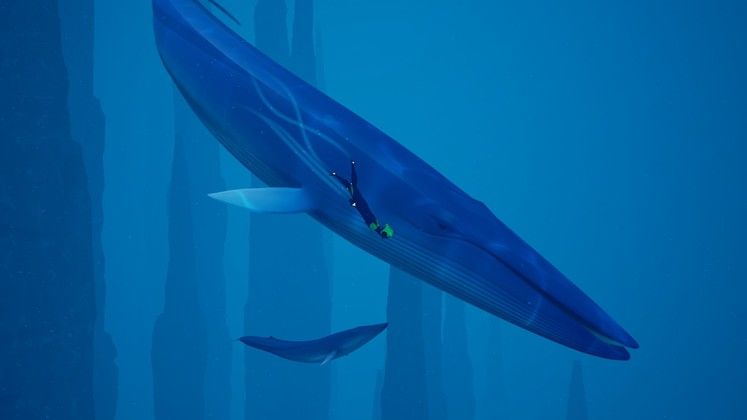 You share the waters with some true aquatic titans

Much less of a videogame with a bespoke set of goals and objectives, Abzû is not the sort of affair that will meaningfully test any aspect of your gaming acumen. To the contrary, Abzû’s ambition lies elsewhere in fulfilling one of gaming’s earliest remits; the need to fashion a believable form of escapism to whisk its players away from their everyday lives and in this, Abzû’s calibre is unparalleled.

In case you haven’t worked it out already, the crux of the Abzû experience is exploration and other than a small handful of very seldom and horrendously easy switch puzzles, you shouldn’t expect anything remotely approaching a traditional videogame experience. With precious little in the way of signposting, Abzû quite literally plonks your wide-eyed diver in the middle of the ocean and other than a brief explanation of the controls, lets you go about your business of exploring its depths and interacting with the myriad of denizens within. From the off, the very act of swimming feels effortlessly elegant, the graceful animation wonderfully underpinning the pin point responsive controls with aplomb. As such, using a pad for Abzû is not just recommended, it’s essential.

Aside from diving and swimming about ( as an aside, your character can do a neat jumping spin out of the water into a dolphin-like dive), your interactions with the world are limited to emitting a sonic pulse that allows you to flick switches, resurrect small sea bots to help you on your journey or separate large schools of fish. One particular joy that Abzû presents the player with is the ability to latch onto any large sea creature and effectively ride about the place, discovering new nooks and crannies on the ocean floor while simultaneously allowing the player a tremendous vantage point to drink in every detail of Abzû’s gorgeous design. 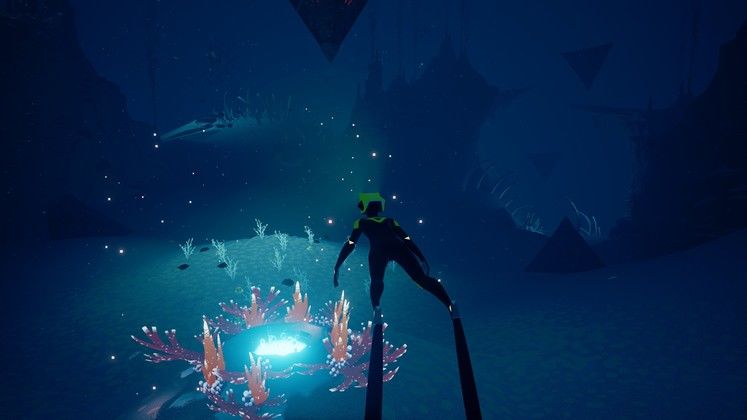 When triggered, these glowing wells prompt new forms of sea life to spill forth

Now, this shouldn’t suggest that Abzû is totally aimless; it isn’t, there is a narrative here, albeit a relatively subtle one that by weaving together natural and other elements, possesses a number of neat plot twists that keep the player guessing. While no hand-holding exists in an obvious sense and despite seeming almost impossibly expansive, Abzû’s gargantuan environments prove easy to navigate in practice with light, whether it be in shafts or as mystical pathways carved through the water, being used as an unobtrusive guide to lead you to the next area and subsequent part of the story.

While you can collect various sea snails and use your sonar ability to activate secret pools that add new creatures to Abzû’s already vibrant tapestry of marine life, there’s no real reward for doing so other than the act itself. Essentially, Abzû is an effort that asks you to relax and become fully enveloped in its painstakingly detailed underwater realms where actual hierarchies of fish exist and proper predator/prey feeding patterns can be witnessed. The sheer amount of work that has gone into fashioning Abzû’s world pays off in so far as it’s genuinely breathtaking in a way that very few, if any other games are. It also doesn’t hurt that in an affair so very obsessed with relaxation and boundless discovery that you cannot die; the removal of that first and oldest barrier to progression in videogames just one more rule of thumb from the status quo that Abzû’s design eschews. 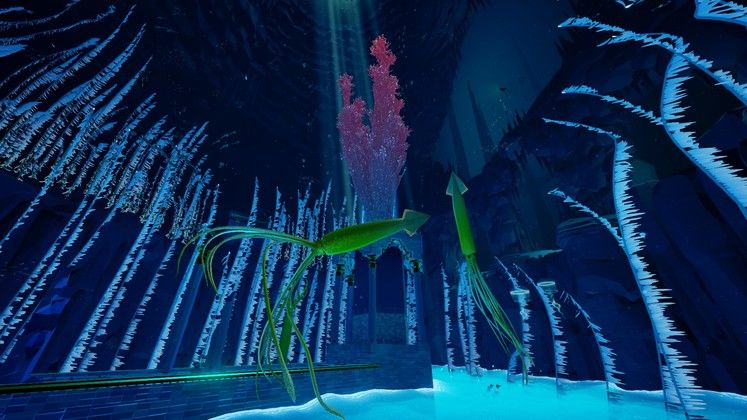 The look of the underwater realms often veer towards the otherworldly 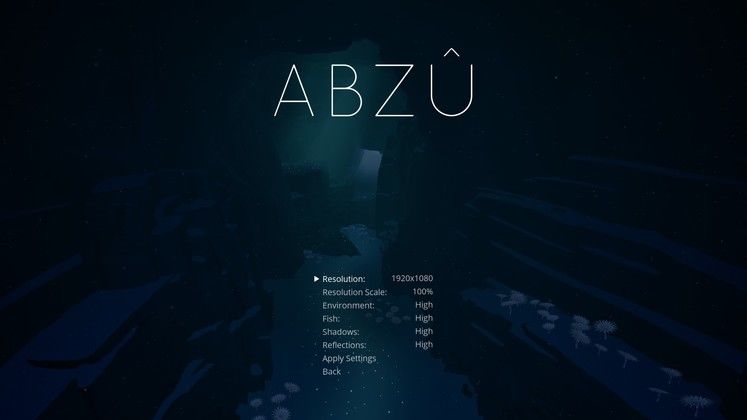 The fact is that I took well over a hundred screenshots for this review despite only seven being required should speak volumes about the visual opulence of Abzû. A gorgeous array of underwater vistas underpinned by great lighting and some of the most realistic fish modelling and animations ever, Abzû is an absolute visual tour-de-force to say the least. Away from the technical achievements of the game, Abzû might just be one of the most colourful games available for PC too; its vast underwater realms swathed in such variance of hue and contrast that it looks quite unlike anything else on the market. Simply put, this is one of the most beautiful games you can buy right now.

From a performance standpoint, Abzû requires every bit of its minimum spec and then some to run at a decent clip. My own PC which includes a 2.8 Ghz i5 CPU, 2GB Geforce GTX 670 and 16GB RAM managed to acquit itself well enough in all but the busiest scenes where frame rate dips below thirty would often occur. In terms of stuff that you can muck about with from a visual standpoint, Abzû lets players tweak resolution, environmental and fish detail in addition to the quality of shadows and reflections, so there’s plenty of scope for tailoring depending on the strength of your rig. 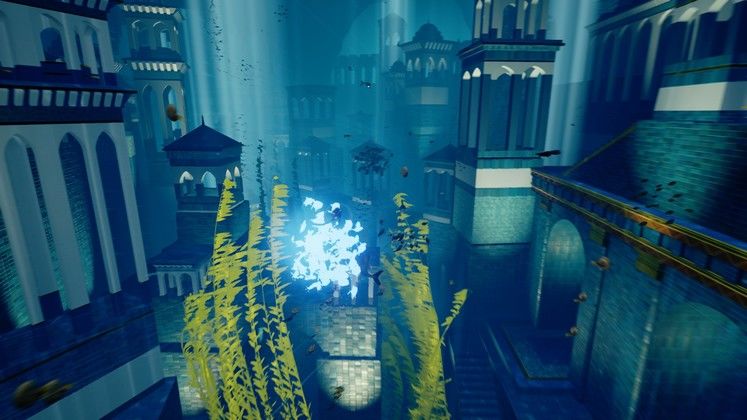 If Abzû is a visual powerhouse than so too does the audio aspect of its presentation prove to be equally formidable. Composer Austin Wintory has really outdone himself here, with Abzû’s tremendous and soothing operatic performance boasting an eclectic mixture of violins, cello, flutes and harps all working wonderfully in concert with beautiful serenades that not only do a great job of reinforcing the wondrous aquatic spectacle on display, but also its quieter, more contemplative moments too. Elsewhere, while voice acting is completely absent from the game, the sound effect work is accomplished, with the underwater ambience well established by a range of appropriately incidental sounds. 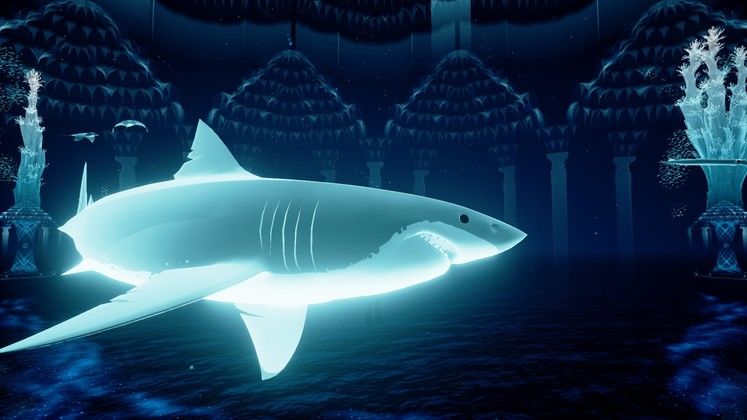 Appearing periodically throughout, this massive shark appears to be a fearsome foe early on

As thoroughly enrapturing as Abzû is on an experience level, there is no denying that it’s more of a pond than an ocean when it comes to providing an effort that will tax the skill of the player. At just over three hours long and with little to do outside of exploration, Abzû shouldn’t be your go-to game if you’re looking for something substantial or even remotely difficult. 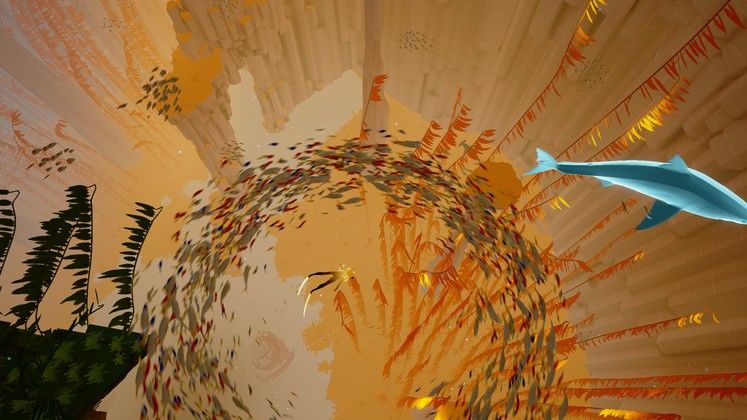 Appearing periodically throughout, this massive shark appears to be a fearsome foe early on

If you’re this far in the review however, this shouldn’t be news to you. Though Abzû lacks the guiding hand of famed developer Jenova Chen who worked on Journey and Flower on PlayStation consoles, the art director of those games Matt Nava, proves to be more than suitable for the task, creating an experience quite unlike any other that provides a window into an underwater world the likes of which none of us could have ever imagined.

Ultimately, Abzû felt like a dream I never wanted to wake up from and so long as you go into it wanting an experience that will captivate with a tale about nature’s dominion rather than something that will challenge you, I’m certain you will feel same too.

The “it’s not a game” crowd will invariably struggle to see the appeal with Abzû’s monumentally relaxed pacing, but they will arguably be the ones missing out here. An absolutely resplendent experience that is thoroughly and generously stuffed with memorable moments, Abzû’s beguiling audiovisual presentation lends it an atmosphere and sense of place that very few, if any, games can match. This is the very apex of videogame escapism.

Riding the back of a gigantic manta ray as it gently explores its habitat, giving you the very best perspective imaginable. 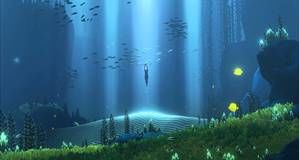