The final verdict on Rebellion’s Redux edition of Battlezone 2 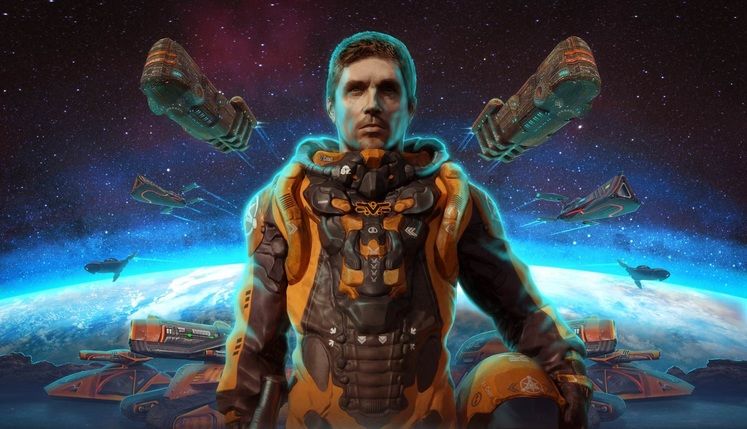 Hot off the heels of Rebellion’s Redux edition of 1998’s Battlezone in 2016 comes the remastered version of 1999’s Battlezone 2: Combat Commander in 2018! Yes, it took longer to remaster Battlezone 2 than it did to develop it! Considering how buggy the original was when it came out that does not surprise me. We’re here to judge the Redux edition on both the quality of the remaster and how good the game is to play now, so let’s get to it.

Check out the best Mods for Battlezone: Combat Commander! Set in an alternate timeline where Cold War-era US and Russia have joined together in the face of an alien threat, Battlezone: Combat Commander sees the newly formed ISDF head out to colonize the solar system. As Cooke, a rookie pilot, you’re on the front lines when a new menace called the Scion appear. The story doesn’t matter too much in these games but it’s certainly neat, despite being told almost entirely in text-based mission briefings and very rarely in cutscenes or the game itself. 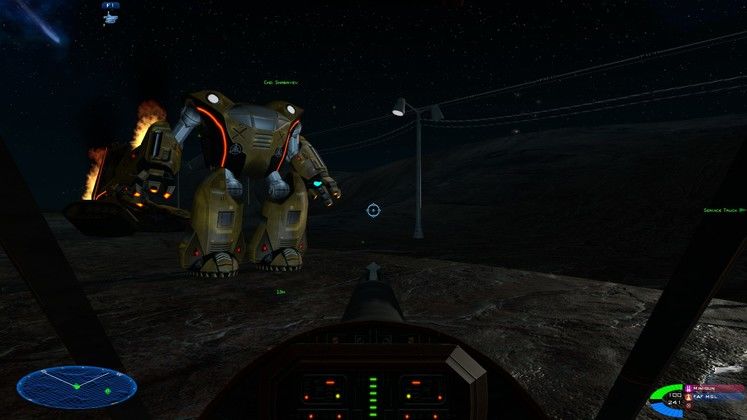 The Battlezone series tried to create a new genre called “Action Strategy”, basically an RTS but where you control a unit on the ground, and still feel unique today since the genre hasn’t really been capitalized on. Cooke commands either a Scout craft or a Tank and can get into action-packed shootouts with Scion directly, but also can order other units to follow him, give them orders, and eventually to build a base, defend it, and create an army like in RTS games.

It really is all quite cool, especially as you can even get out of your vehicle at any time and explore the world like a first-person shooter. Done right this could’ve been the greatest game ever, especially after correcting the mistakes (mostly around difficulty) of the previous Battlezone, and it’s certainly worth your time – but a number of irritations hold it back, and Rebellion couldn’t sort them out with a remaster since they’re part of the original game. 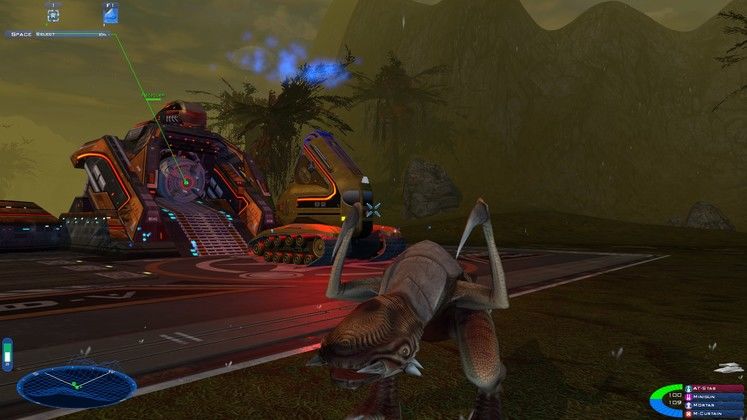 For one, Battlezone 2 really throws the player in the deep end without enough information. There’s no tutorial since you would’ve been expected to read the manual, but the odd thing is that the game takes great pains to introduce you to certain things and ease you into the base-building stuff… then it forgets to tell you important stuff, like how to get ammo, how to repair buildings, and if your vehicle gets destroyed what the heck do you do next? Die, usually. Almost all the time you’re left to figure out how things work, or what does what, or – whoops, that’s a shame, a Scion tank snuck by and annihilated the base while that menu was open. Even ignoring that, Battlezone is still tough and the Scion give no quarter.

And then there are the controls. The developer, who if Wikipedia are correct were actually Star Wars Battlefront and Mercenaries creators Pandemic, did a fairly good job of giving players full RTS and Action Shooter game controls while making things as easy to use as possible – which is to say, not very at all. It’s certainly possible to get used to them, but having to traverse multiple menus trying to work out where the Turrets are to build, while Scion are shooting the place up (there are no pause commands), made us long for a regular RTS where we can just click on it. We’d honestly much rather have less options than a confusing crapton of them. And then maybe that Tank wouldn’t have strayed into the firing line of that turret. 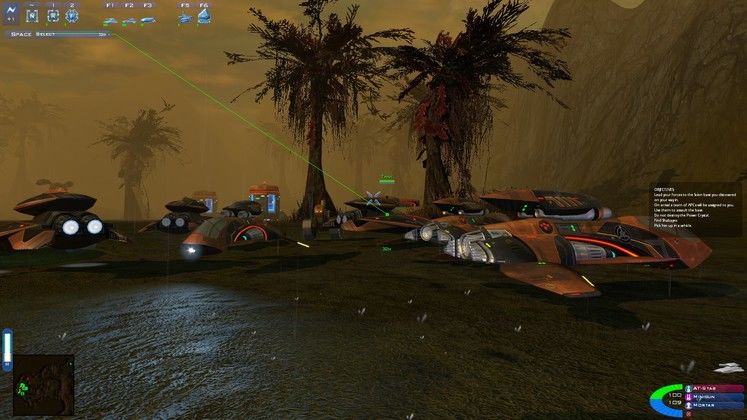 Then again, we can’t think of another game that offers this kind of variety. Battlezone 2 missions vary wildly in objectives and things to do. Attacking bases with Mortar Bikes, escorting a Mobile Recycler over an unstable ice field, rescuing a fellow pilot while the AI mounts an assault, investigating ruins, being stripped of a vehicle and forced to avoid Scion forces on foot, and all that before we even mention building an entire base and army and leading a full assault on a Scion base. Missions in Battlezone 2 are never boring and every level feels different from the last.

As you can tell, the requirements for Battlezone: Combat Commander aren’t particularly system-taxing. Our system is an AMD FX-6300 Six-Core Processor, 16 Gb RAM, Nvidia GTX 1050 Ti 4Gb, and Windows 10 64-Bit, and we sailed through everything in full settings. 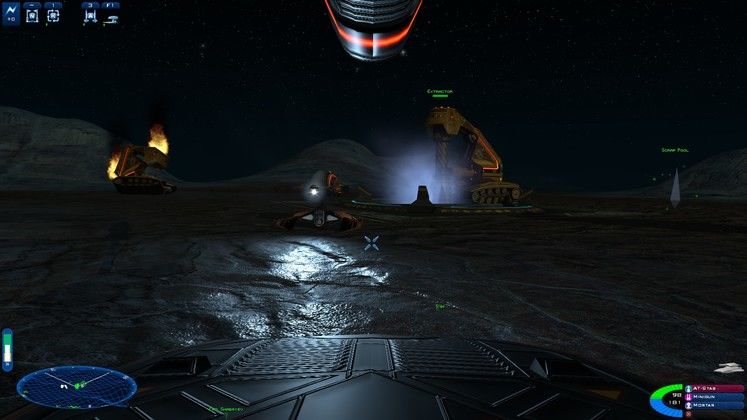 While not a remake on the level of the new Shadow of the Colossus, Rebellion and Big Boat’s remaster does have the game looking surprisingly great. The landscapes in particularly are gorgeously textured, with a lovely sheen you wouldn’t expect from 1999. Models are simple but they have a neat Tron-like style (which explains why Rebellion’s Battlezone VR is even more clearly Tron-inspired). Explosions are a bit weedy, which is a shame, and the few cutscenes are hideously low-res, but that’s it as far as graphical complaints go.

The only other nitpicks we wanted to bring up, that could still be sorted out with a patch, are a few UI and menu issues. For starters, there are no dialogue subtitles. That’s bad at the best of times, but we found that dialogue was often muffled by the sound of our engines so we occasionally missed key pieces of information. Next, it’s ridiculous that it takes six screens to exit the game. That’s Menu > File > Abort > Main > Logout > Quit! Thank you, Alt+Tab. But the only thing that affects gameplay is that a lot of the UI is now far too small. I have to squint to read objectives, and the map is ridiculously tiny. A side-effect of upping the resolutions, but this needs sorting. [Update: According to Mike in the comments there is actually an option to increase the size of the UI - the cryptically named "In-Game Resolution Expansion", which is apparently getting renamed in the next patch. Thanks Mike!] 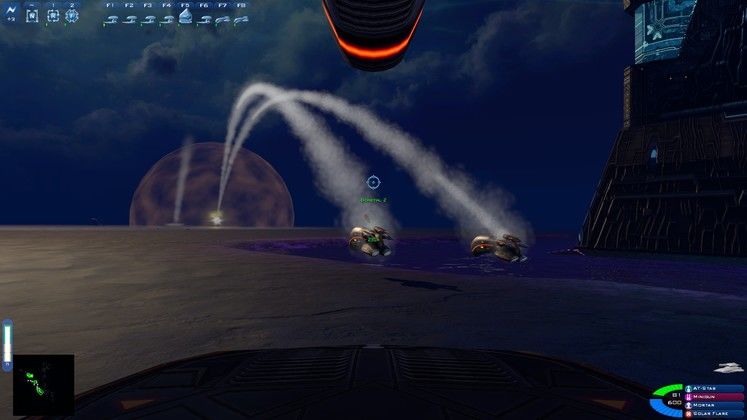 Battlezone: Combat Commander is a good remaster of a good game, but neither parts are perfect. Battlezone 2 is an excellent idea delivered well, with an incredible amount of variety in missions and is still probably the best mesh of action shooter and real-time strategy around. That said, it tries to do too much and overcomplicates matters, meaning managing a base and army isn’t as fun as it should be – and the Scion are ruthless, never giving you a chance to get your bearings or get used to the controls.

On the Redux side, Big Boat’s polish has resulted in a good-looking game that runs smoothly, but there are still a few things that need improving – such as tiny UI icons and text, no subtitles, and the lack of a decent tutorial. It’s certainly worth picking up Battlezone: Combat Commander if you like the central premise of an RTS/FPS mash-up as it’s still one of the best games in the Action Strategy genre, but if Rebellion or Big Boat make a proper Battlezone 3 then we hope it’ll focus on the fun more than the frustration.

That moment when you’ve built up a significant force and attack the enemy base. As good as any RTS, except here you’re seeing it ground-level. 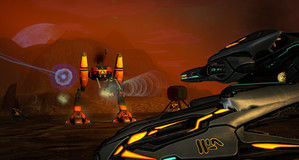