Remember the good old days? Those old days sure were good, weren’t they?

“Do you remember those shooters you used to love back in the day? Of course you do. Man, those games were cool. Weren’t those games great? Boy, were those games ever awesome. Quake was great. Unreal was great. You moved super fast, and you killed stuff, and it was awesome. So much more awesome than modern games. Man, Quake, am I right or am I right?”

Remember the good old days? Those old days sure were good, weren’t they?

Imagine having that conversation for 3 to 5 hours, and you pretty much have the experience of playing Bedlam, a first person shooter from indie studio RedBedlam. Based on the work of novelist Christopher Brookmyre, Bedlam is set in a game world where real-life humans have been trapped within its digital boundaries. You play as Heather Quinn, a sassy Scottish lass who inexplicably finds herself stuck inside a 90s PC shooter, and has to fight her way toward figuring out how and why she ended up there.

The first few levels are convincing approximations of early polygonal shooters, with fast action and even faster walking speeds. These levels are lovably awkward in exactly the way that era of games were, with brain-dead AI, levels that are slightly out-of-scale with their inhabitants, an arsenal of weapons too big to keep track of, and strong encouragement toward savescumming. This early bit works well enough, if only as a nostalgia trip. But from there, you escape the 90s and move into more modern gaming styles. There’s a Call of Duty knock-off, a Half-Life knock-off, a Halo knock-off–each of which still plays like a mid-90s game. Somewhere in there, you realize that Bedlam’s awkwardness isn’t just the result of slavish adherence to old design tropes. Bedlam is just a bad game trying to blind you to its awfulness with a heavy veneer of nostalgia and a curtain of references to other, better games. 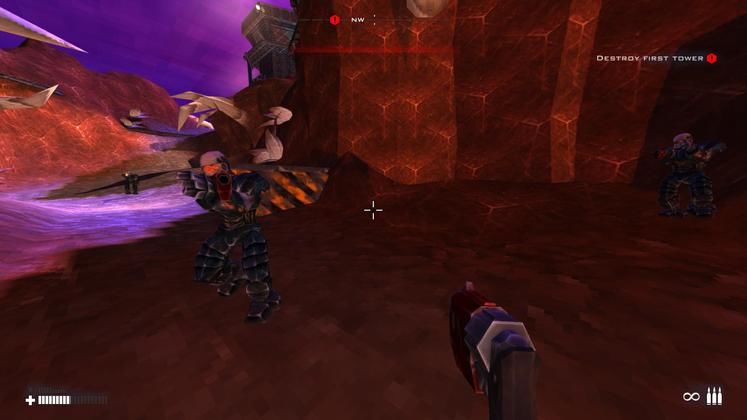 “Hey, remember Quake?” asks Bedlam, out loud but to no one, the echoes of the question bouncing upon the hollow walls of its broken spirit

Some of Bedlam’s flaws are those that the games it’s emulating also had, but those games are nearly two decades old now. The levels are all meandering environments that ramble toward the conclusion without a thought to design or consistency, and they’re filled with seemingly random distributions of enemies. The enemies do little beyond firing at you and walking in your direction. Your arsenal is so completely overcrowded that it’s impossible to quickly select a weapon that matches your situation. Story is delivered by faceless voiceover while you wander down empty valleys and hallways. Boss fights are nothing but circle-strafing while holding the fire button. Most of the time, there’s a compass that points you toward your objective, but sometimes there’s not, and I have no idea whether that’s a bug or a feature.

Bedlam’s tribute is so poorly considered that it manages to run out of ways to reference old shooters, and starts throwing in other genres completely out of nowhere. Halfway through the game, you’re suddenly fighting RTS units and skeletons and plushies for God-knows-what reason. There’s a first-person Pac-Man level because, I don’t know, arcade games are funny? The worst moments are when Bedlam pokes fun at itself, drawing even more attention to its massive flaws. There’s a point where Heather makes fun of how awful Half-Life’s Xen levels were while you play an even worse replica of one. Cracking jokes about terrible game design doesn’t make it any better, and Bedlam’s adherence to doing so makes all of its sticking points stand out even more. 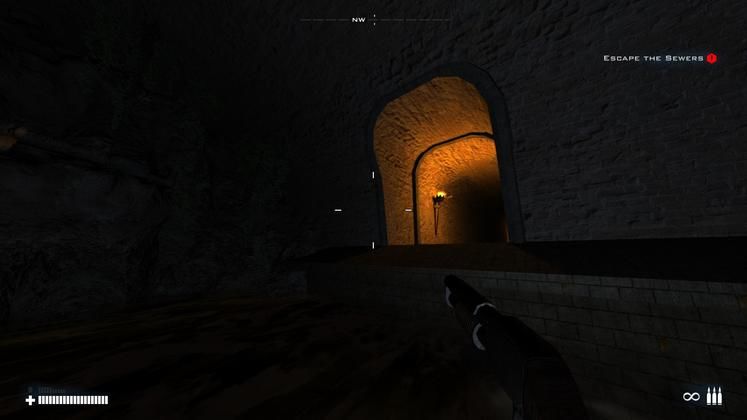 “Seriously, a sewer level?” is something that your character says out loud

The most horrible offender of all is the tremendously awful writing, which has a bunch of characters and a whole lot of plot to throw empty, video game-themed references at you. References, not jokes. Unless you find somebody simply saying “Halo” to be hilarious, you’ll find Bedlam’s many attempts at referential humor to be little more than a sad commentary on the game’s own lack of identity. There’s an achievement called “Don’t Mess With Valve” that you get by messing with a valve. That’s it. That’s the entire joke. I assume it’s a Steam joke, but I can’t say for sure, because that would require an effort to actually tie a half-hearted reference into actual humor, which is something that Bedlam never manages to do.

Bedlam has one joke that works, when you’re thrown into a deathmatch arena and subjected to a lot of whining from teenage kids with anger issues. Actress Kirsty Strain does a wonderful job trying to bring life and personality to Bedlam’s protagonist, but she cannot escape the crushing weight of the awful, meme-ridden dialog. 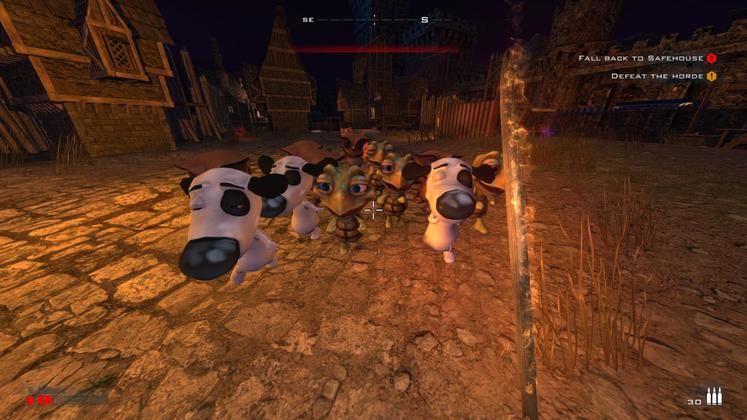 Oh, yeah, it’s just like in that plushie game. You know, the one with the plushies

When you drop into the Call of Duty-inspired World War II stage, you soon find yourself wandering in endless circles around a maze of identical environments while hordes of soldiers spawn from seemingly nowhere and half-heartedly fire on you. And maybe that’s the point. Maybe the joke is that there are a lot of mainstream shooters that play like this and they’re mostly really bad. Bedlam certainly spent hours telling me about its own flaws. If the message is “don’t play bad games,” I think I can get behind that. Don’t play Bedlam.

Bedlam is a neat concept that has managed to result in a game that’s utterly bankrupt of creativity, polish, or fun. It’s a game that went so wrong at every turn that it makes you just feel bad for its developers. There’s nothing here but a bunch of half-hearted references and wistful nostalgia for old video games, both of which you can get plenty of for free on the internet.

Getting reminded that Quake, Unreal, and Half-Life are all pretty cool.