Talking about a 2D puzzle platform game these days will likely net you a slap with a wet haddock rather than the beard-stroking ruminations we saw in the post-Braid world of 2008. But stop right there with that fish because Escape Goat 2 eschews pretension for a terrific set of puzzles and a charm that deserves a closer look.

As the title suggests your task as the titular purple goat is to escape from a mysterious prison via a series of single screen 2D puzzles. There’s little in the way of hoofholding as the levels start off easy and progress naturally towards challenging stages. Not once did I feel lost or unsure what to do as the game had already prepared me with its excellent design on how to approach each room.


Each level has a theme, be it a library or a cave and each has its own particular elements that come into play. I found myself having to expect the unexpected with each level that I uncovered as some stages require careful planning or trial and error to unlock the solution. Others require split-second platforming and exquisite timing to reach your goal.

In the hands of a lesser developer these elements could collide into a mess, creating a disjointed and frustrating experience but Escape Goat 2 excels in nearly every aspect. Its design is almost alchemical in how it blends the base puzzle/platforming elements it starts off with into a delightful golden experience.

It helps that there’s a simplicity beneath the game that makes it easy to experiment with. The controls feel responsive and death is only a second of frustration coupled with, usually, a realisation of how to beat the level. That sense of discovery and progress is hard to design into a short game like this but Escape Goat 2 does it and motivates you to try one more time without making the experience frustrating.


At the end of each stage you’ll rescue a soul of a lost sheep, and slowly work your way to freeing them from this mythical prison tower you find yourself in. There's a story to follow here if you wish but Escape Goat 2 lets you happily ignore it and to be honest there's no reason to get involved as the puzzle gameplay itself is what's on show here.

You're not alone on this quest as the immortal mouse is on hand to help you out. With the ability to crawl to otherwise unreachable areas, to hit switches and distract enemies, the mouse is essential in solving most of the puzzles presented to you. With some wildly imaginative additions to this characters abilities, using it to find solutions and watch them play out produces some of the most satisfying parts of the game.


It won’t take long to reach the end of Escape Goat 2 and complete the main levels. However, like with many other puzzle games, it reserves the gut-wrenchingly difficult stages for after completion. It’s then that you realise how much you’ve learnt from the main game and how fiendish the design has now become. Forget Dark Souls, prepare to die a lot to make any progress through these stages. They are entirely optional of course but add longevity to the game even if they require a greater shift in skill sets and brain power to complete.

With a gorgeous soundtrack and its sublime design Escape Goat 2 is the kind of 2D puzzle platformer that made me feel warm and fuzzy inside - like a mug of hot tea with a jam crumpet. Sure, it won’t last long in the memory like Braid or Fez, neither will it be a classic in the same league as Super Meat Boy but Escape Goat 2 does deserve the same sort of praise - it’s a superbly designed and exquisite experience that’ll entertain and enthral through all of its short playing time.

And hey, you get to play as a goat. A purple goat. Take that Jon Blow.

When all that planning and death pays off in a flawless run. 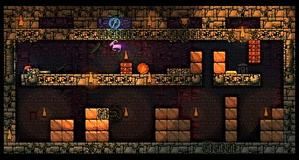