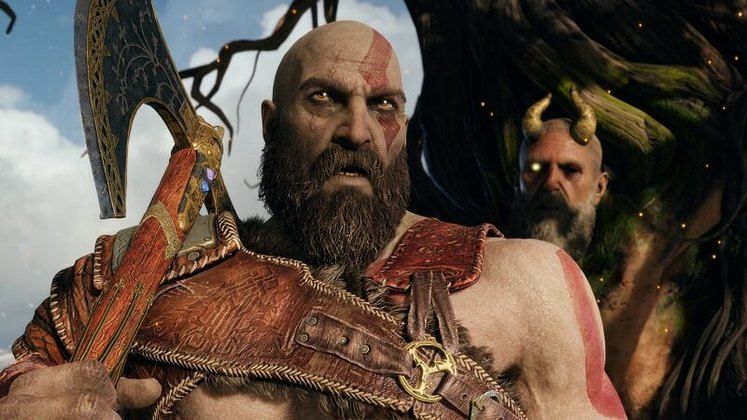 2018’s God of War is anchored in the franchise’s bloody, violent past and is not afraid to put you face to face with seemingly unbeatable odds or monumental scale. You meet gargantuan monsters whose booming voices alone easily dwarf Kratos and make your way through the frozen dead body of a rather unlucky giant, all while carving open many a foe. But the game’s biggest surprises often come from elsewhere and help shape a different identity for a series that has now reached maturity, without ever losing sight of what made it great to begin with.

The first such surprise is the directorial choice of using one continuous camera shot to tell the story of Kratos and his son Atreus. It does a marvelous job of bringing you closer to the duo’s journey while preventing any loss of immersion, even when you die and have to restart from a nearby checkpoint or stop playing for a while. The seamless way in which cutscenes blend into actual gameplay without ever requiring an artificial delimitation makes both the game’s bigger and smaller moments more impactful.

Another is how well Kratos is depicted as a stranger in an unfamiliar land. Although he’s as capable a warrior as ever, Midgard isn’t his homeland of Greece and he is not hell-bent on killing everything in sight. He only knows his son, treats everyone else he meets with a serious dose of skepticism, and cannot read the strange runes that open the doors often found in his path. That’s where the boy steps in, acting as a guide through both Midgard and this new part of his life. 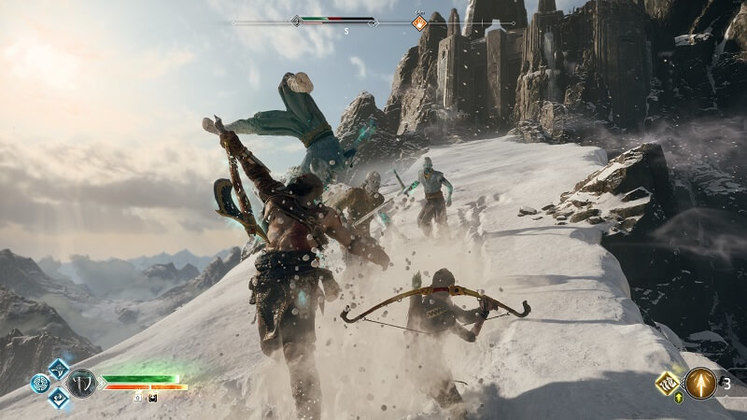 “The duo doesn’t really know how to connect with each other at first, but natural growth during and outside critical story moments move their relationship along at a very organic pace.”

There’s a lot of chemistry between Kratos and Atreus, despite the former’s initially distant approach to parenthood. The duo doesn’t really know how to connect with each other at first, but natural growth during and outside critical story moments move their relationship along at a very organic pace. More importantly, their bond manages to stay at the forefront of the entire journey, regardless of whether you’re having a chat with one of the game’s charismatic NPCs, rowing your boat to get to your next destination, or fighting horrifying beasts.

Although Kratos steps in to do the heavy lifting when fights break out, Atreus is far from a helpless child you must protect. Equipped with a bow and a dagger, he can be commanded to fire arrows at opponents or call forth magical summons like wolves to further aid in battle. As the journey progresses and you upgrade his armor, bow, and skills, proper use of his abilities can actually help turn more difficult fights around.

It’s all done via a relatively simple system, too, that involves only a few buttons: one to fire and trigger summon skills, another to swap between different arrow types, and a third one when precise aiming is required. Atreus’ marksman abilities also come in handy when dealing with puzzles that often involve hitting magical crystals with the right type of arrows to remove certain obstacles or create light bridges. 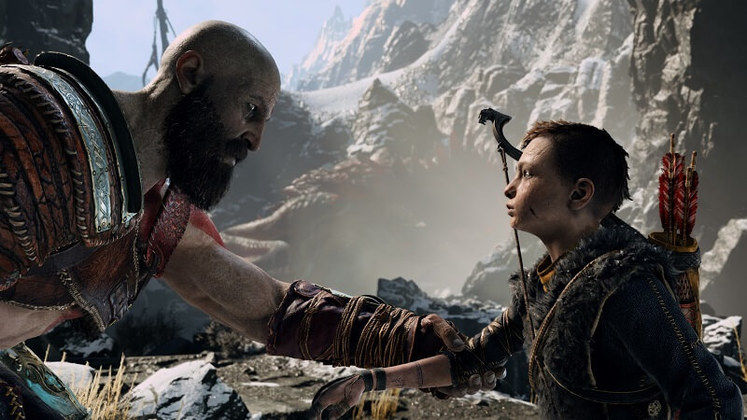 In addition, the boy’s knowledge of Nordic runes also sees him writing journal entries – framed as his own learnings about the world –, highlighting enemy strengths and weaknesses or stories that flesh out the realms you visit and their gods.

God of War’s open world is decidedly gamey in its design. Midgard – its hub-like area built around the Lake of The Nine – gives off a sense that its icy peaks, dark caves, and old ruins were clearly built to accommodate convenient paths and side activities that work together to keep gameplay fresh. This, however, never really bothers thanks, in part, to gorgeous visuals but also how every quest and activity feels like it’s an adventure unto itself.

The bigger moments are mostly reserved for the main story, but side quests have a fair few twists of their own. More importantly, the latter never really overstay their welcome, nor are they used as filler to pad out the playtime. There’s always a piece of gear or materials to loot, a story to uncover, or a big foe to battle. 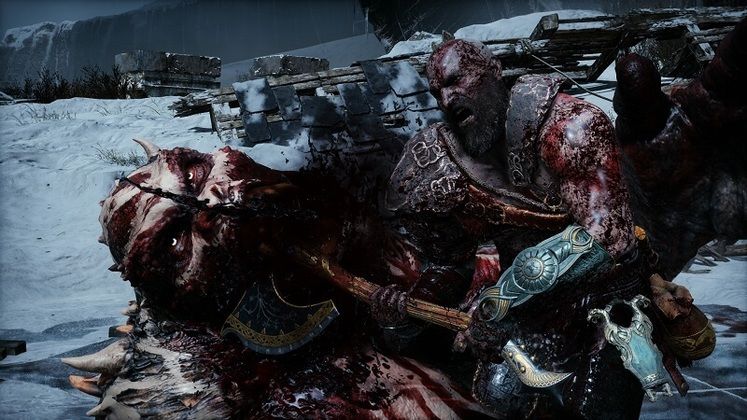 Side paths conveniently loop around, ensuring that you’ll find quite a few chests, collectibles, and lore stones by putting in just a small amount of effort. There is some backtracking involved, largely revolving around main story abilities that you don’t always have when you first visit a place. But even if you do question whether a dwarven king would have really built a stronghold to primarily allow future visitors to easily loot as many things as possible, this satisfying sense of discovery and completion ultimately triumphs.

Even landing onto a small, seemingly empty island with just one wrecked ship and a bunch of rocks carries a sense of adventure with it. You’ll end up fighting a couple of enemies, open the way to a puzzle, and throw your axe at bells inscribed with glowing runes so that they ring in unison and unlock a nearby chest that gets you closer to a permanent health upgrade. It’s, ultimately, world design that respects your time and actually gives you reasons to get lost exploring its every nook and cranny.

Over the course of the game, you also visit other realms than Midgard, but it’s by far the most fleshed out. That’s not to say that the others aren’t anything to write home about. Alfheim’s beautiful blue lakes and formerly exquisite interiors tell stories of a prosperous civilization caught in a war whose end you’re intruding upon. Helheim’s frozen expanse is as unwelcoming to the living as you’d expect the land of the dead to be, and those you meet there are either oblivious of your presence or want you out. 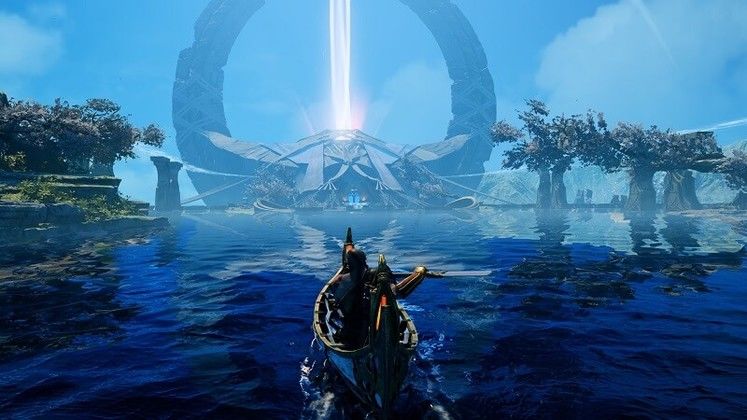 “Even landing onto a small, seemingly empty island with just one ruined ship and a bunch of rocks carries a sense of adventure with it.”

There’s also Muspelheim and Niflheim, two optional realms that provide you with multiple trials and a rogue-lite maze you can navigate. Tackling them lets you obtain materials that help you craft stronger armor while bringing a welcome change of pace and an amount of grind to which not everyone will be partial.

Combat still lies at the core of the game and its latest incarnation is far from devoid of violence. Kratos has a new sharp toy in the shape of the Leviathan Axe, which serves a double purpose. It is both a puzzle-solving and murder tool that you can use to pull off simple light and heavy attacks alongside different special moves you unlock by slotting in gems that you can freely switch between fights.

You can also throw it at an opponent to freeze them, then use Kratos’ fists to pummel them, quickly building up their stun meter which enables you to pull off brutal executions. These allow you to split enemies in two, shatter their heads underfoot, or rip their jaws off in a glorious display of sheer brutality. 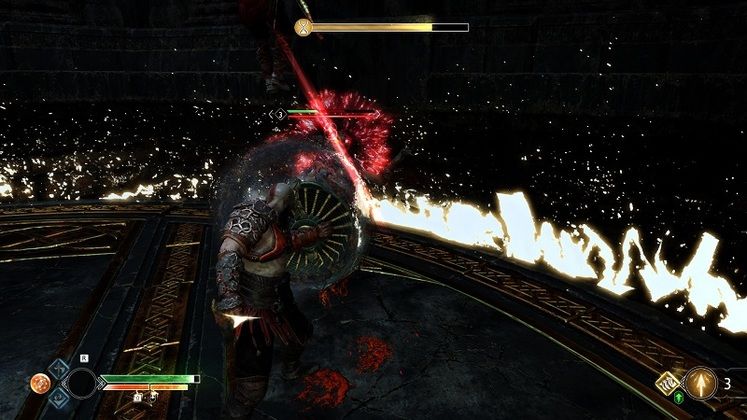 Switching between the axe as a ranged weapon you can call back at will and its deadly melee slashes is often the way to go, adding lots of speed to God of War’s fairly weighty combat. Its system isn’t overly complex but does go beyond just the basic combos once you unlock skills using experience gained throughout your journey. Upgrading runes, pausing at the right time, or switching attack types at the end of a combo can prolong the chain of slashes or let you tap into new sets of them, gradually turning Kratos into an even better warrior.

You’re free to experiment as much as you want with your build and attacks, but once everything clicks and you unlock your full arsenal, you get quite a few ways to savagely crush any opposition. Kratos also gets access to craftable and upgradable armor pieces that enhance stats and sometimes grant him boons when pulling off specific moves. This push towards RPG territory certainly gives you more gear choices to ponder, but stays on the light side of things, so you won’t spend your time figuring out optimal stats and bonuses.

There’s some enemy variety in God of War and, even if by the halfway point you’ll have seen most of the baddies, different variants imbued with poison, frost, or fire keep you on your toes. Simple draugr might be the game’s cannon fodder, but when Dark Elves start zooming around and blending ranged attacks with melee charges, or wolves gang up on you, you’re going to need to switch tactics. 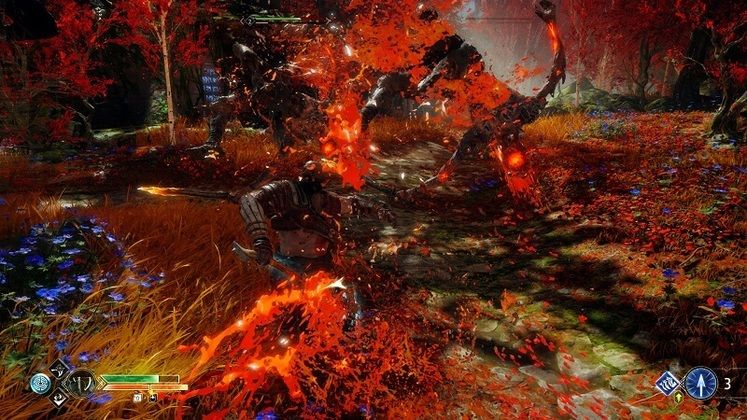 Perhaps you’ll have to use more area of effect attacks while watching your positioning so you don’t get surrounded, or get better at dodging and parrying while looking for windows of opportunity to attack. Then, you also face minibosses – which do get a bit predictable towards the end – and a series of truly memorable bosses. On normal difficulty, the main quest isn’t particularly tough, but some of the side content does require a fair bit of trial and error, so it’s not exactly a walk in the park, either. 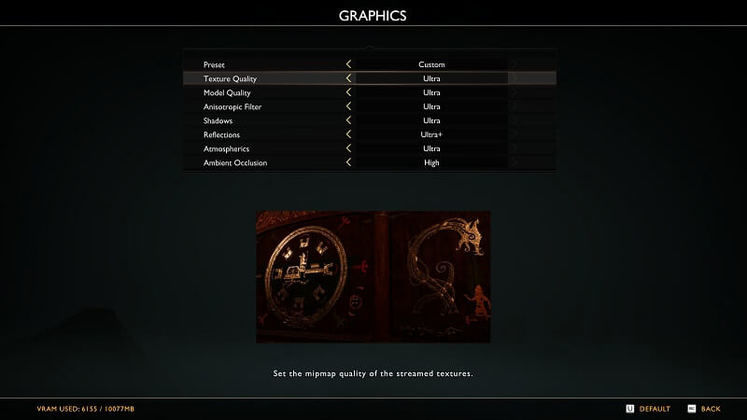 On an i7-8700K, 16 GB RAM, Nvidia RTX 3080@1080p, God of War ran smoothly most of the time. The only issue I encountered was noticeable stuttering around the Lake of the Nine and during door opening animations when transitioning to some areas. Although the rest of the game ran very well, these blemishes sadly drag down what’s otherwise a great port.

Nvidia DLSS/Reflex and AMD FidelityFX Super Resolution are also supported if you need an extra performance boost. You can also tweak a number of different settings to find that sweet spot for your system. Sadly, the stuttering persisted regardless of settings and turning DLSS on didn’t really seem to change much. 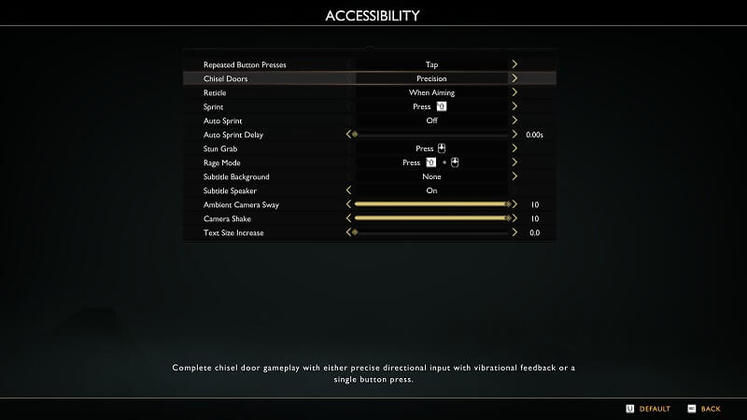 The game also comes with its fair share of accessibility settings that let you switch between repeated presses or holding down the button in order to complete quick time events, changing the bindings for Kratos’ stun grab and rage mode so that they don’t include the middle mouse button, turning auto sprint on and off, a text size slider, and more, as depicted in the screenshot above.

After more than 55 hours spent playing, I’m still awed by just how great God of War is. This is the result of a clear, determined vision, its separate elements harmonizing almost perfectly to deliver an experience that understands the series’ blood-soaked origins but is also not afraid to push it into a more mature and nuanced direction.

Kratos and Atreus’ relationship develops naturally as does their understanding of the foreign land they’re journeying through. The story takes its time, never rushing its satisfying reveals, and making way for a set of surprisingly personal boss fights, while the continuous camera shot used throughout the game is a masterstroke in terms of presentation.

All this is built around a snappy and responsive combat system that has more depth than you’re initially led to believe. There are more jaw-dropping surprises I didn’t touch upon simply because it’s best that you experience them for yourself. Looking back, aside from the port’s few performance flaws, my only real complaint has to do with Sony taking this long to bring the game to PC.

Unlocking Kratos’ full arsenal during the main story. You’ll know why when you get there. 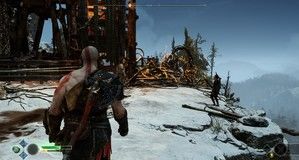