MX vs ATV, Pure, Fuel, Motorstorm, and now Nail'd. You wait an entire generation for a competent off-road racer and then fifty of the buggers turn up at once, each touting unique features like 'persistant track deformation', 'independent tyre suspension', 'pre-loading physics', 'GIGANTIC TRUCKS', 'motion captured mud splatters' and 'realtime leather chafing'. And that's without even mentioning Trials HD, a title that confidently zapped the formula back into two dimensions, removed the filth, flipped a few V's to convention and cranked the difficulty curve to an angle rarely seen outside obscure indie releases and the 80s.

So where can Call of Juarez developer Techland take the genre after such a rampant display of feature saturation? It can pop a bit of metal on the jukebox, strip its female racers to implausibly tiny leather attire and then concentrate on exaggerating every gameplay mechanic to blaze a trail in the past, that's where. The speed of Nail'd's vehicles occasionally puts Burnout to shame, the field of view is closer to fisheye than your average skate video, and catching some air frequently involves swerving around Zeppelins or through the blades of a rotating wind farm. Trees are set alight, waterfalls become a legitimate part of the track, and vision-impairing mud splatters the screen with a globby consistency that'll give nightmares to anybody in attendance at Glastonbury '98. It is, in short, utterly ridiculous.


Not that that's necessarily a bad trait. Pure shared a similarly frivolous relationship with reality and turned out to be one of the best off-road racers of this generation, so there's no reason to hold Nail'd's "extreme" ambitions against it on principle. In fact quite to the contrary, those all-important first forays into its world are pretty decent. Delving straight into the career mode throws some impressively lengthy tracks at you from the off, each sprinkled with a liberal dose of environmental set-pieces akin to a hippy version of Split/Second. Whilst the visuals can't really hold a candle to Disney's other vehicular racer, Nail'd can at least say that it allows you to bounce off the top of a hot air balloon, bullseye a ring of fire towed beneath a byplane, land on top of a moving train and then stylishly round the corner straight into a tree.

The handling model, although basic, is relatively responsive. Whether choosing a bike or an ATV you'll be presented with a vehicle that ferrets around the screen, squirming over boulders and accelerating with haste. Those charactertistics are only enhanced after unlocking upgrades, and your tried-and-tested nitro bar is topped up by performing perfect landings, crushing opponents, popping a wheelie or aiming for one of the many boost gates that litter the course. Seldom in the genre are you forced to decide whether you'd like to easily avoid trees or chimney stacks as a career path, but it's a legitimate concern here; finding a personal balance between aerial and ground-based stat upgrades is vital in later stages. Races are broken into standard circuits and point-to-point scrambles, and the occasional 'stunt' challenge peppers the roster to add a little variety. Not that there any traditional stunts to pull outside of the aforementioned boost triggers, which unfortunately turns that mode a fairly flat experience.


But the tracks really are the focus here, and it's clear that the majority of Techland's development effort was spent throwing as many ideas at the screen as possible. From the deserts of Arizona to the icy peaks of the Andes, spectacular scenery glides past in never less-than-dramatic style. For the most part the action bounces along in compliance and showcases the peaks and troughs fairly well, but all too often your tyres will veer off onto their own path, bursting out of control and exploding on the slimmest of craggy outcrops or splinter of scenery that should be ridable. On top of that, the sheer velocity of your vehicle, the occasional ineptitude of the camera and crowded nature of the courses frequently combine to create unavoidable obstacles. Although the game does its best to avoid such annoyances, at top speed with the best equipment they occur with a frequency that borders on frustrating. You simply cannot see things coming.

There's also a general lack of polish and refinement in evidence. Crashes are non-events that spring you back into the saddle within a couple of seconds, but they often place you either ahead of the pack or facing the action at a strange angle. Invisible walls are also in effect, causing your otherwise untouched vehicle to break apart when crossing indiscriminate aerial boundaries or sometimes when glancing the side of a building. At other times you can bounce off a lorry without cause for concern, or drive head-first into a tree without so much as a broken mirror. If consistency in hit detection is all-important for any arcade-style game that prompts you to regularly dally with the edges of its play area, then unfortunately Nail'd falls down too often for comfort, and it's difficult to know whether your landing zone will result in a quick bonus or the sound of an engine block disintegrating on a pebble.


Outside of a brief tiered career mode and perfunctory online options there really isn't very much to keep you coming back either. All of your equipment and costumes can be unlocked within a few hours, at the end of which all of the tracks will have been fully explored and each of the stomach-churning jumps repeatedly experienced. Split-screen is absent, there are precious few other modes and leaderboards, and it seems that any semblance of structural depth was long forgotten in a quest for quick accessibility.

Unfortunately Nail’d’s core gameplay doesn’t do quite enough to justify stripping back all of those extraneous details. It’s a game that’s begging for a little more refinement, visual polish and structural content; and without those in place it struggles to elevate itself above the frustrations inherent in its erratic engine and course design. Such a genuinely playful and bouncy approach deserved better, but without any major hook to keep you involved, Nail’d is a brief - but entertaining - diversion.

Weaving through a trio of hot air balloons to bullseye a boost gate. 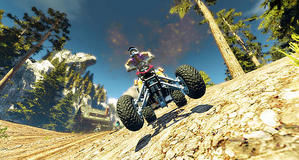