Obsidian pens its finest tale yet 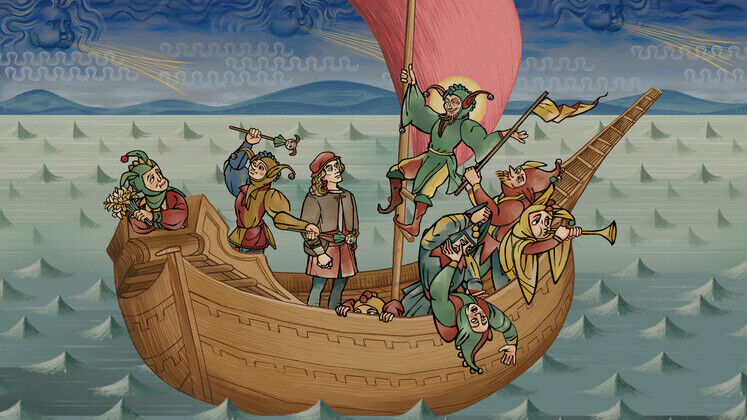 Don’t read this too loud, but Pentiment is Obsidian Entertainment’s best game to date.

Obsidian has made some very memorable games over the years that tended to push ambition in several directions whilst suffering technically. Only a company like Obsidian could create a stringy mess like Alpha Protocol and have it talked about with the kind of fondness you’d normally reserve for your nearest and dearest relatives. Its last two projects (The Outer Worlds and Grounded) drew from the studio’s past in their own ways, but felt a bit ‘safe’. Pentiment appears to be a ‘one for me’ kind of project, and the result is the most tonally and technically consistent game the studio has made.

Pentiment’s story begins in Tassing, an Alpine Bavarian town during the 16th century. The player is cast as an artist named Andreas Maler, who has come to Tassing to work on illustrations for manuscripts at Kiersau Abbey. He’s well aware that this is the end of a journey for him before he must head back home and marry a woman he’s never even met. At a crossroads, Andreas starts the game almost mourning his situation, desperately trying to escape the onrushing normalcy that awaits. He is at loggerheads with the abbot regarding the work, but otherwise, the monks and the townsfolk of Tassing are a largely agreeable bunch. Which makes it even harder for Andreas to know he’s leaving soon.

Then a swaggering noble rocks up in Tassing and sets tongues a-wagging. The mood changes, and there’s strange behaviour cropping up all over town. That proves to be an especially bad omen when a murder occurs, and an elderly monk is set to take the rap for it. Andreas, who has great affection for this monk, takes it upon himself to seek out the true culprit with just a couple of days to gather enough evidence to present an alternative. 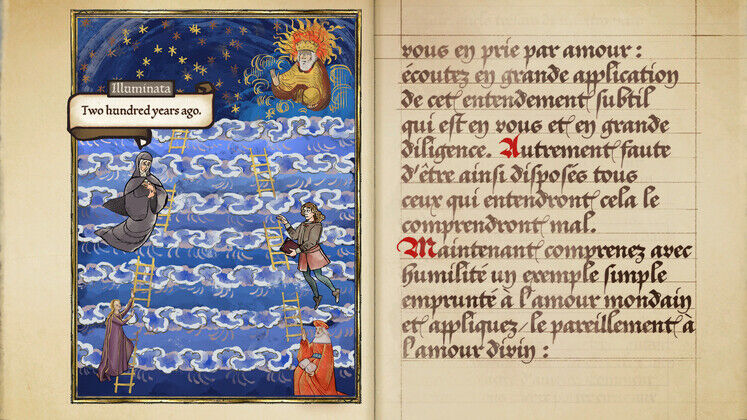 There's lots of inventive use of the visual style in Pentiment

Pentiment is a fantastic example of what Obsidian can do when firing on all cylinders. The relatively stripped-back approach to presenting a game world clearly lends to a narrative structure that feels giddily freeing and expressive. With only a set amount of hours in a day to actually interact with the residents of Tassing, it’s very much up to you where you get your information from and how that makes you feel towards certain people. You feel both in control and struggling to make order from chaos. Consequences are not immediately felt, and don’t tend to be obviously signposted as to their intended destination. To go too deep on that aspect of the game invites unnecessary spoilers, but what I can say is that the game’s title is fitting.

Okay, one nugget of information that might be needed. Pentiment isn’t just set over a few days, but spans years. The legacy of your early decisions echoes through the lives and times of this community in so many fascinating ways. Because there’s no ‘wrong answer’ to your more crucial choices, the impact of your stance is so much more meaningful than you’d expect.

That would be enough to make Pentiment an intriguing game, but a huge part of its spellbinding appeal comes in its style. The game is presented like the illustrations artists such as Andreas would have put forth for books and manuscripts in the 16th century. There’s not a single line of spoken dialogue, and music is used sparingly, but the impact of the written text of Pentiment is nothing short of bewitching. Every text bubble is literally scribbled out as if an artist is in control of it, right down to the spelling mistakes that get corrected. That’s actually a surprisingly key reason I felt it was easy to remain engaged in the rather heavy text-based conversation because I’d spot the spelling mistake, and wait to see if it got corrected. Of course, it always got corrected, but it got me every damn time.

That’s not to discredit the dialogue quality either. Depending on the choices you make as to Andreas’ background, the options available to you in conversation can produce some uniquely sassy and hilarious results. Depending on the standing of the person you’re talking to, the way text is written both audibly and visually changes to fit them. When angry slander is spoken, there’s an assault of angry ink spatters that surround the offending words, and it conveys emotion so beautifully. 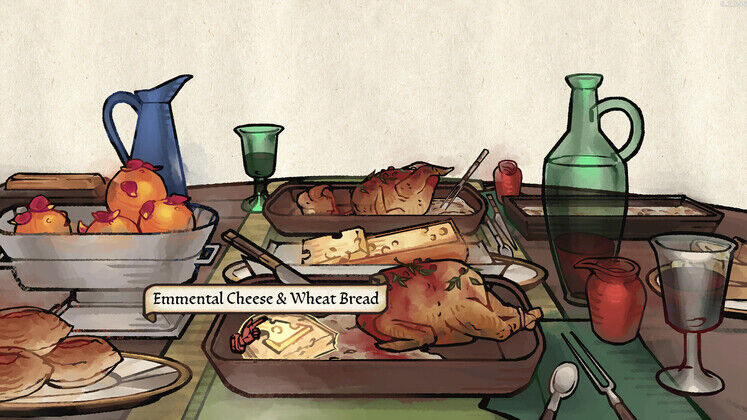 Meals can provide information as well as food

I love that Andreas’ investigations aren’t just him chatting to someone to get info, and being sent off on an arbitrary task in order to obtain the juicy nugget of knowledge he needs. At mealtimes, you can sit with folk from Tassing and converse over food, learning tidbits of information as you tuck into the delectable meats, pottage, bread, cheese, and eggs that make up most meals of this 16th-century Alpine town. I genuinely adore the concept of just finding out vital information via casual gossip as you eat or hang around doing some task.

Then there are the minigames. Occasionally the player is given little puzzles and games to play within the context of the world. These can be anything from solving a cipher to learning how to spin wool by hand. You never quite know when one of these interactive treats is coming, but it’s always a delight.

Things like this make the flow of Pentiment so natural. It may be starkly unrealistic visually compared to what Obsidian has put out before, but the way conversation and interaction plays out is almost effortless, and ends up being almost terrifyingly natural in a way the developers’ games have never truly managed before. I find it quite fitting that the presentation is that of a book, because Pentiment grabbed my imagination in the way only a great book can.

Pentiment is a game where I have so much to say, but I know that saying too much would spoil what marvels it brings for anyone playing at launch. Yes, it’s slow, methodical, and never really appeals to action-focused gamers, but for anyone wanting to experience something that drags you into a time and place, Pentiment has the scratch for that itch.

Obsidian has a fantastic history of ambitious RPG titles, but none feel as confident and refined as Pentiment. This is a game that truly understands the intoxicating nature of choice in video games, and rewards you with cynical torment befitting the world it portrays.

Having your whole perspective on the case change just because of a bit of idle banter you heard whilst eating dinner. 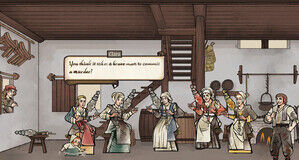