Welcome back to the sprawl, chummer

Last year's Shadowrun Returns was a great little isometric RPG set in a rich cyberpunk world, with a solid combat system and some neat mechanics. The accompanying story campaign was enjoyable enough too, but it felt ever so slightly tentative, with no sidekicks to adventure with and not much in the way of side missions or extra routes through levels to explore. Oh, and the save system sucked. Thankfully latest expansion Dragonfall fixes all those problems, adding a twisting, turning mystery plot and a cool new area of the Shadowrun world to explore for good measure.

Dragonfall takes place in Berlin, with your chosen runner (shadowrunners are essentially agents for hire, taking on dangerous jobs for various well-paying clients) taking part in a night-time heist (this is cyberpunk fiction, it's always night-time) on a mysterious mansion. Unsurprisingly, things quickly go south. Soon enough you and your crew find yourselves targeted by some well-funded mercenaries, struggling to piece together a mystery involving a rogue AI, several dead hackers and the legendary dragon Feuerschwinge, an ancient menace long thought defeated.


Solid genre writing was at the core of Shadowrun Returns' charm, and that continues in the expansion. Because there's no voice-acting, Harebrained Schemes have had to work hard to ensure that everything from scene-setting descriptive text to exposition and hard-boiled dialogue is all full of flavour and charm, and they've done a fantastic job. Along with a great musical score, the excellent writing proves you don't need mega-budgets and endless cutscenes to bring a universe to life.

This is a world that feels believable, despite the fantastical backdrop, and it's largely because of the excellent world-building. Drugs, gangs, strung-out deckers, corporations and street cant; all those juicy elements of a good cyberpunk pastiche are present and correct, used liberally but never awkwardly. Tossing out an nonchalant 'null sweat' reassurance to your buddies as a job goes awry, chatting on the street corner of your kiez (neighbourhood) to a cranky old-timer troll, pocketing a bottle of cram to trade with the worn-out junkie for some information. It all roots you in the world, makes you care about it and its inhabitants. Most of these hub encounters are nothing to do with the main plot, just optional conversations that help fill out the world. The anarchic Flux State of Berlin, a sprawling metropolis where megacorporations, street gangs, cults and brokers all co-exist in an ever-shifting cauldron of chaos and influence, is a fascinating place to explore.

Your new team-mates are an intriguing bunch too, each with their own flaws and goals that slowly come into focus over the course of the game. Glory is the cold, distant medic hiding a troubled past, Eiger the hard-as-nails soldier with authority issues. Dietrich's my favourite, an ageing punk anarchist growing ever more jaded with the life of a shadowrunner. They might be familiar genre archetypes, but each is well-written, three dimensional, and ultimately likeable, even if some don't start off with a particularly favourable disposition towards you. Winning difficult teammates over and proving yourself as a true leader to your crew is one of the best parts of Dragonfall. Of course, if you're the confrontational type who doesn't care much for camaraderie, you can choose to belittle and mock them at every turn if you want to. Some of the snarky responses you can come out with are lots of fun.


There's great supporting characters and enemies too. To give away too much would spoil Dragonfall's mystery plot, but suffice to say that everyone has an agenda and everyone has solid reasons for doing what they're doing (with the possible exception of one recurring villain, who seems simply to enjoy perforating things with a minigun. Then again, who doesn't?). There's no cackling boss with insane plans for world domination and ultimate power. Again, the plot is built up slowly, giving you the pieces of the puzzle early so that when bad things start to go down, it makes sense why they turned out the way they did.

Depending on the character you play, you might also discover plot points or extra clues in an entirely different way. Shadowrun's 'etiquette' system basically allows you to know the lingo for one social strata; gangs, street, socialites, academia and so on. In the first game this had a negligible effect, with only the occasional extra dialogue option. Here there's more to play with. An academic background might allow you to identify a toxic formula, while those familiar with corporate security might be able to bluff their way past a checkpoint. Even when your reward for these alternate options ends up being a bit more cash, it's a great way of making each new character you play feel unique. Your skills matter too. Riggers (engineers who use combat robots in battle) might be able to hack enemy drones to open fire on their allies, while those skilled in medicine might recognise certain key facts when glancing at a procured document.

Before each mission you can choose your line-up from a roster that includes your regular companions and a few additional mercenaries, each with their own set of skills. Apart from one instance I can't remember the game ever telling me I needed to take a particular class, so I was generally free to mix and match to my own personal preference. Those who dislike Shadowrun's hacking mini-game (which takes the turn-based combat inside a computer system filled with viruses and firewalls) will be glad to hear that you can pretty much skip it most of the time.


Apart from a few new weapons and spells, basic combat hasn't changed too much. It still lacks a certain sense of impact; gun, spell and weapon sounds are rather weak, and melee is never quite as satisfying as it should be. That's not to say it's poor; there's still fun to be had dropping a flash grenade into the middle of an enemy group, then finishing them off samurai style before they get a shot off. Different characters all have their own tricks to play, and there's lots of different weapon styles and tools to employ. Combat's accomplished enough to keep you entertained, but still lacks a little punch. In a welcome move largely inspired by irritated fans, Shadowrun Returns' odd checkpoint save system has been replaced with a more sensible version allowing you to save whenever you like, so there's no more dying right at the end and having to go through the whole level again.

I finished my first run of Dragonfall with my long-suffering, short-tempered but ultimately loyal dwarf Rigger in around 15 hours, and immediately wanted to roll up a new character and give the campaign another go. If you liked Shadowrun Returns but felt the main storyline was missing something, you’ll find that Dragonfall improves on the original in almost every way. Don’t expect major changes to overall gameplay, but do expect an excellent story with rich characters and a great new setting. New to Shadowrun? Dragonfall isn’t available standalone, but if you’re looking to get into the series I’d suggest picking it up along with the main game. It’s well worth it.

There’s several I don’t really want to spoil, suffice to say that you get to tell several arrogant power-players inShadowrun’s world exactly where to shove it. 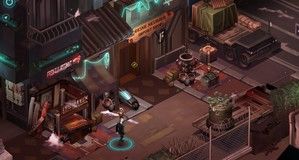