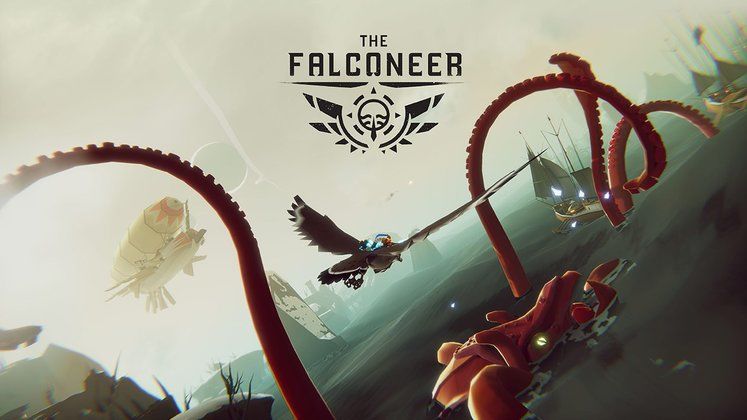 That The Falconeer has been developed by one man is rather astounding. Even in a day and age where indie developers seem to best their AAA counterparts when it comes to unique and thoughtful game ideas, The Falconeer’s developer, Tomas Sala, has outdone himself in a lot of ways.

Just one look at any screenshot from the game will have you in awe, but the very idea of a game about falcon riders duking it out over a large mass of water called the Great Ursee is only something you’d get from a creative indie developer. One moment you’re gliding across the Great Ursee, exploring the various islands and points of interest and the next, you’re barrel-rolling your falcon during intense air combat, or making strafing runs at pirate ships.

And for the most part, it works, but the early game really makes you work for it. 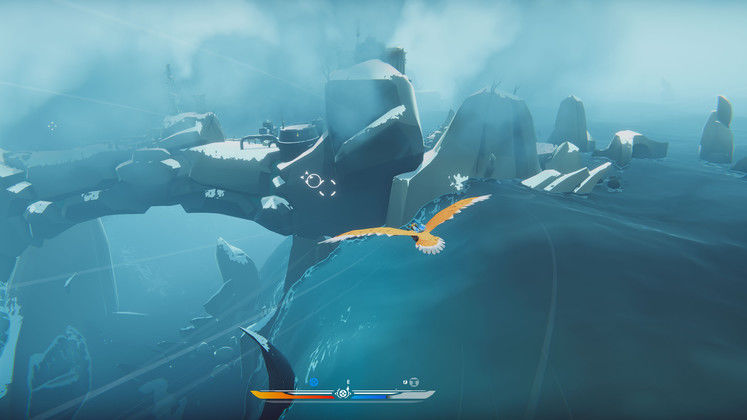 A huge part of The Falconeer’s appeal is the lore and world-building it has in spades. There are four distinct factions that inhabit the Great Ursee and each of them are locked in a perpetual war against one another. The story begins by throwing you right into the thick of the drama as a mercenary falconeer and before you know it, you’re picking sides among these warring factions.

As you explore the Great Ursee, you’ll uncover many locations, some of them cities among the sea, or natural wonders, and yet others are mining colonies that cling to rocky outcrops of the Great Ursee’s terrain.

It’s a beautiful world and the further you progress through the story, the more you grow to admire its people’s fortitude and the more you fall in love with its unique setting.

Unsurprisingly, air combat is a huge part of The Falconeer. Your falcon starts off equipped with a lightning-like rifle and the ability to pull off a variety of aerial maneuvers, like diving, mid-air stops, and even barrel-rolls.

Admittedly, it’s a difficult control scheme to get used to at first. In fact, I died far more often that I’d care to admit for the first few hours. However, you’re forced to learn how to use that variety of maneuvers and as you begin to experiment with them, you learn how best to use each of those abilities to best effect. Being followed by a fellow falconeer? Pull a full air-stop to watch them come flying past you, placing them right in your line of site. Taking fire? Barrel-roll your way to safety.

However, it’s not always as responsive as you’d hope and the odds are almost never in your favor. Sometimes all the maneuvers in the world aren’t enough to avoid the plethora of fire coming your way and despite an increased level of skill in pulling them off, you’ll still die more often than you’d expect.

I often found that when I wasn’t able to complete missions, it meant that I’d need to go back to performing courier quests, or pirate-hunting missions, to accumulate more of the game’s currency, called soulshards, in order to buy better weapons, or to modify my falcon with a variety of upgrades you can purchase. You can even purchase new and different falcons, which have their own distinct strengths and weaknesses that may be more suited to your goals.

The dogfighting, er falconfighting, wasn’t always as smooth as I’d wanted it to be, but it was almost always fun, even when I was frantically trying not to die. As the game’s primary focus is on this air combat, that it holds your attention so well is a real treat. 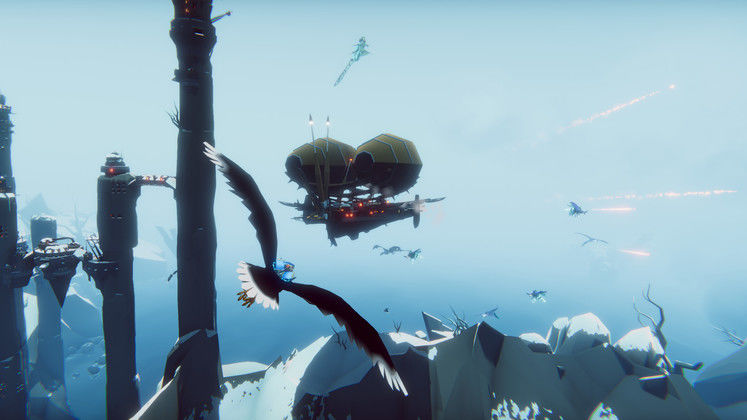 Frankly, that may not bother everyone, but after many hours with The Falconeer, my patience for the amount of time it took to travel to my next destination became thinner and thinner. I understand a need to limit your boosting ability during combat, as being able to constantly boost would perhaps make the falconfighting a bit less tense, but while I’m simply traveling the Great Ursee, I’d love to be able to do so faster.

This may seem like a petty complaint, but as I mentioned before, the more time I spent flying, the more impatient I became with the slow flight speed of my falcon.

Repetition, The Enemy of Wonder 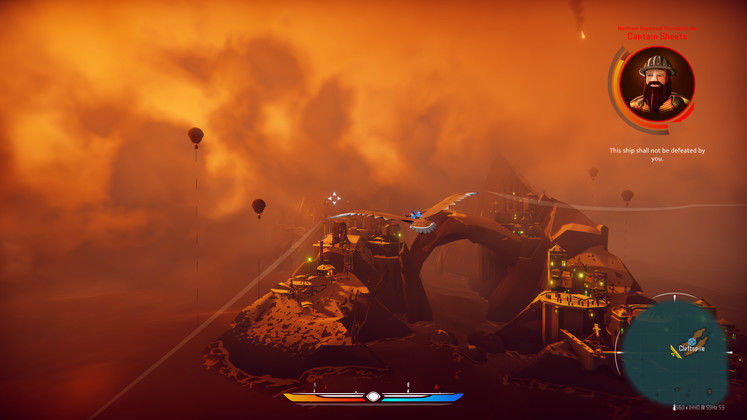 While the campaign missions did feel varied and exciting, the side missions are far too limited in number and diversity. There are only a handful of different side mission types and they always end up playing out the same way. Seeing as the player is practically forced to complete a large number of these missions in order to properly equip your falcon to overcome your next objective, the lack of variety detracts from the otherwise fantastic world-building present in The Falconeer.

It was another issue that nagged at me the more and more I played The Falconeer. By my thirtieth cargo delivery or pirate bounty, I’d felt pretty burnt out on these side missions. The game could really benefit from a larger variety of missions and some rare or ultra rare missions that might even further explore the peoples and lore of the Great Ursee. 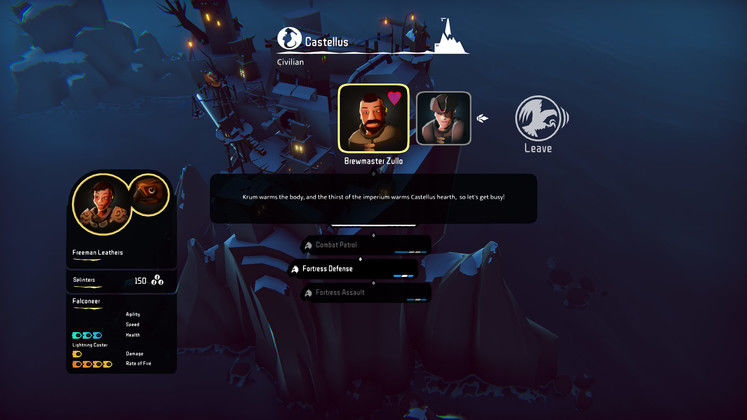 Circling back around to the visuals of The Falconeer, I’d be remiss if I didn’t wax poetic about the game’s presentation. There aren’t many indie games that are able to evoke atmosphere as well through their visuals as well as The Falconeer has. The visuals are easily the first thing that caught my attention with this game and they’re a stand-out feature here.

I don’t doubt that they’ll grab many potential players’ attention and rightfully so. They’re beautiful and elicit a feeling that few games can through their visuals.

It’s a beautiful game, The Falconeer. 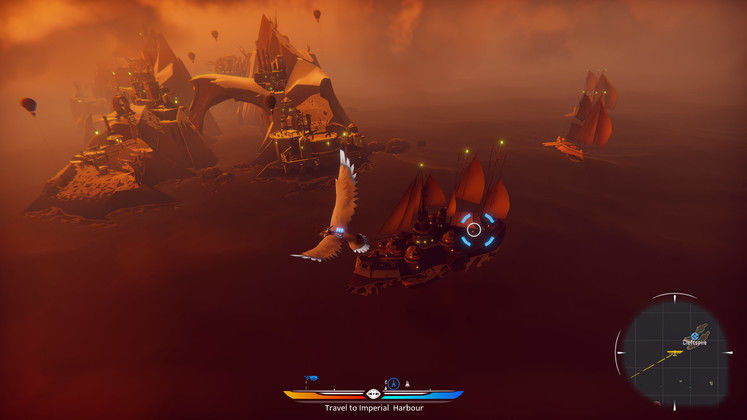 The Falconeer is at its best when you’re finally able to hold your own against the many dangers that await you. Working your way up to that point feels far too slow, as many of the side missions are repetitive and the falcon moves way too slowly when you’re traversing from place to place. When the story ramps up, and you’ve invested the time to improve your pilot and its falcon, you’re finally rewarded with an interesting, mostly fair and fun experience, where the world-building meets frenetic gameplay and you realize you’re playing a game unlike any other. But there are many minor flaws to the experience that prevent The Falconeer from reaching its full potential. Shoring up the repetitive side-missions with more variety, speeding up the downtime, and balancing the difficulty curve will do a lot for The Falconeer’s appeal. Until then, it’s still a fun game, with some rough edges.

When you finally begin to put the aerial maneuvers together and to great effect, as you’re dodging incoming falcons, stopping in mid-air to shake that tailing dragon, or barrel-rolling to produce near-miss fire. 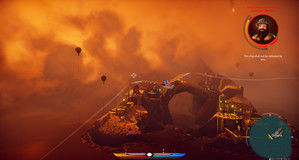