The Journey Down: Chapter One

The Journey Down: Chapter One Review

Point and click wears ancient esotericism like a wide grin, and takes its act to the big city

It seems like nearly every adventure game that comes out now is released episodically. It’s not hard to see why; episodic releases solve the problem of waning interest in prolonged adventures from those with short attention spans, and more importantly, allows for shorter development times with immediate turnarounds that can be used to work on later episodes, which is ideal for independent developers who might not have lots of time and capital to sink into one big release of a full length game.

It follows that episodic releases would become the norm in the adventure genre, given how relatively niche the genre has become in comparison to the peak of its popularity, with the smaller studios picking up most of the slack. It seems clear, with the genre’s resurgence, that the episodic format is at least part way responsible.

Comparisons abound in the adventure genre, perhaps above all others, where such titans as The Secret of Monkey Island loom over the little guy, but there’s something weirdly reminiscent of Monkey Island about The Journey Down. Visually, it’s partway between Monkey Island’s recent and angular special edition revamp, and Grim Fandango, minus all the sunlight.

Whereas Grim Fandango drew its inspiration from Dios de los Muertos for its art direction, then fused the Day of the Dead with some art deco design and noir atmosphere, TJD has West African masks and a nebulous near future hyper urban world.

Maybe it’s the gritty undertone of TJD, or maybe it’s the brooding scene composition, but the empty eyed characters have an (assumedly) unintentionally sinister aspect to them, far more so than the literal spirits of the dead that Grim Fandango had.

Still, it’s not really a criticism that the similarities can be drawn between TJD and what was most likely a major influence on its production. While TJD is less vibrant than what might be interpreted as a spiritual predecessor, it certainly has its own identity and spin on the execution of its themes.

While it isn’t exactly subtle when it comes to letting its audience know how unforgiving life in the big city can be, TJD does pull off the noir aspects of its design with a certain panache; there’s a recognisable 1930s thread running through the boxy design of the vehicles for example, or the sublime surprise of its musical score that encompasses the game’s themes perfectly with its swagger filled blend of moody lounge jazz and reggae of all things. If nothing else, The Journey Down at least supplies a saxophone solo worth the modest admission price alone.

Its characters on the other hand, are less consistent. Despite some of the unnerving the character design might do (but probably won’t, at all), it’s impossible to not be won over by the player character Bwane’s best buddy Kito; owner of the jolliest voice ever to be stuffed inside a head that is the exact same shape as that of a Lego man’s.


As with many adventure games, and both the ones mentioned earlier, TJD is an underdog’s tale that this time starts with overdue bills and cut power. It’s one of TJD’s strengths that its protagonists come to life as every bit as happy go lucky and work shy in the face of their problems as they’re portrayed, mostly thanks to the excellent voice acting, which borders so closely to perfect it might as well be labelled as such.

Touches like how humanising it is to have Bwane insist on referring to the scholarly, and stiff as a plank Lina as ‘Lady’ despite telling him her name multiple times really sells the character, and exemplifies how tightly married the writing and acting is to create a memorable and nuanced protagonist, which is crucial in the point and click genre.

The rest of the cast on the other hand, could take a lot of pointers from the lead. Support characters suffer from, most noticeably, poor quality of voice acting. This is not to say the voice acting itself is bad, as much as the recordings of the voice acting are bad. Over half the minor characters sound like they’re being streamed live from underneath a duvet, and it’s very jarring to go from the pristine quality of other characters to the muddied and plainly technically inferior, which works against the game by taking its audience out of the story whenever it becomes too noticeable.

The voice acting itself is very hit and miss too, with noticeable bouts of Goldilocks porridge performances. Many hit a flailing too much, or a wooden not enough, but perhaps the worst aspect of this is that several side characters come off as being cardboard exposition machines. This sort of thing is made so noticeably prominent by the fact that TJD has characters who really come across as believable and human, as oppose to the shadowy, heartless CEO/gangster villain whose cartoonish evil seems to be more of a plot device, ready to veer into cliché at a moment’s notice.

Though the visuals strike a nice balance between hand painted back drops and smooth claymation-esque characters, it’s the puzzles that really earns The Journey Down’s comparison to Monkey Island; the design as a whole being recognisably in the vein of traditional Lucasarts fare. The puzzles carry on that strong tradition of innate ridiculousness and the logic of disbelief that meshes beautifully with how nonchalant Bwane is. No ruffled dreads here. There’s some variety away from the tried and true item combination puzzles, with pattern recognition, though sadly no dialogue puzzles.

The only real source of frustration is how difficult it is to tell that certain objects can be interacted with, as some sprites occasionally merge into the unusable background, though pixel hunting as a whole is mercifully absent thanks to the pin sharp item labelling system. With that said, the requirement to have to drag items out of the inventory to use them, rather than simply click on them is a little bit counter intuitive, though easily (eventually) overlooked.


With the brief introduction that Chapter One gives to the world of The Journey Down (clocking in at around two hours), it’s too early to cast judgement on how well TJD uses its base in West African themes, although the visuals are well realised, most of the story elements are but small tastes for later, when the mysticism that’s so strongly hinted at as not just superstition will come to the fore.

What The Journey Down: Chapter One does definitively as a whole, is prime its audience to anticipate its next part, and it wouldn’t get anywhere close to that level of palate whetting if it wasn’t a well crafted slice of the classic point and click gateaux. Instilled with an obvious reverence and applied knowledge of the genre, The Journey Down is an adventure game made by people who love adventure games. The ride’s a little bumpy at the moment, but it’s surely going interesting places.

Learning that planes and boats have interchangeable engines.

The Journey Down: Chapter One Essentials 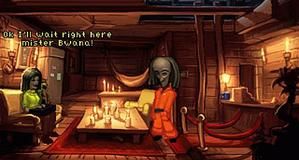