The Next BIG Thing

The Next BIG Thing Review

Adventure gaming with the crazy knob maxed out

Liz Allaire, one of the lead character's in point-and-click adventure The Next Big Thing, is a whole picnic's worth of sandwiches short of a picnic. She doesn't just have a screw loose - she's lost the entire toolbox. Here at Strategy Informer, being completely and utterly doolally is a state of mind that we all strive for, or at least worship. The craziest and most naive people have the most fun, right? Who wouldn't want that?

The Next Big Thing is a great adventure game, but not for the usual reasons. The puzzles aren't particularly clever, and the action follows a very A-to-B-to-C style of play. Yet the wacky characters, the odd environments and the 'WHAT THE HELL IS GOING ON'-inducing storyline make this a well worthwhile experience.


The aforementioned Liz Allaire is a reporter for the local newspaper who is looking for a big scoop. Unfortunately for her, she finds one, and winds up being kidnapped. Even more unfortunate is that her knight in shining armour is Dan Murray, sports journalism 'extraordinaire' who can't really stand Liz's crazy outbursts. Of course, she's his partner, so he has to hunt her down or his job may well go missing too.

Players control the duo via the standard point-and-click controls, clicking anything that looks interesting to find out what the characters think, and whether or not they can interact. Now, usually in an adventure, there isn't too much emphasis on examining things and receiving feedback, with generic 'It is a crate' responses the norm. Then again, this isn't a normal adventure game.

When taking control of Liz, you'll want to look at every single thing available, just to hear her inner thoughts. The stuff she spurts out is simply incredible, ranging from the crazy to the barking mad (yet insight). She is a force to be reckoned with, and even the in-game characters will be regularly stumped by her reactions.

It's not just Liz either. The Next Big Thing's world makes no sense whatsoever, in a brilliant sort of way. Settings are surreal, with a very modern day feel, yet filled with strange alien creatures and robots. It's as if someone with an eye for realism came along and made this gorgeous cel-shaded world, then a mental patient randomly injected their own ideas into the mix. Again, we fully endorse all of this - the crazier the better, in our opinion.


The silly settings also lead to a silly storyline, which in turn leads to ridiculous situations. The storyline is tracked via a strange flow-chart system, which feels kinda useful, but at the same time is really for show. It does tell you what you're meant to be doing next, but really any good adventure game should already know that anyway.

The game looks fantastic too, with lovely animations and backdrops to navigate. Even once you've gotten bored of going back and forth through the same settings, it's possible to double-click anywhere and have your character teleport straight there. As you can probably guess, this is incredibly useful.

The personality may well be turned up to 11, but the puzzles aren't so hot. While the characters are thrown into a whole heap of interesting scenarios, the solutions are usually a little dull. There's nothing to yawn-worthy, mind - it's just not as fantastic as the rest of the game. It may well be that there's a balancing issue between the good and the average, which makes the less-than-impressive areas of the title seem even more stale.

Another example of this is the contrast between Liz and Dan. Liz is great, we could play her puzzle sections all day long, and she pretty much makes the game. Dan, on the other hand, isn't so interesting, with his city-slicker attitude and boring catchphrases. Not that we'd wish for him to be as crazy as Liz - it's good to have some variety - but his lack of personality really shows compared to the rest of the game.


It doesn't really get any better throughout play either, and you eventually get to the point where even Liz's dialogue isn't as exciting anymore, as it's wedged between monotonous sections.

THE NEXT BIG THING VERDICT

The Next Big Thing, then, is not exactly what it says on the tin - but we still got plenty of laughs out of it. If you’re on the prowl for a point-and-click adventure, this will easily tide you over until the next Telltale title comes knocking. Never before has a game produced a character who was so… disconcerting.

When you finally find Liz again!

The Next BIG Thing Essentials 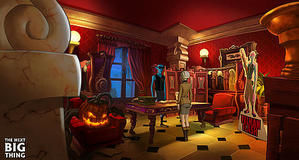