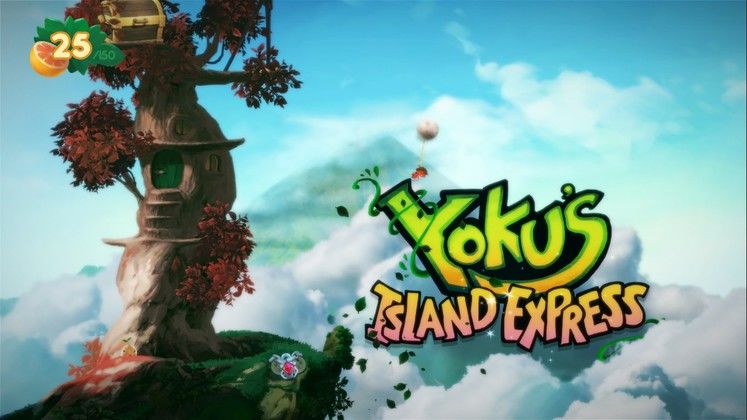 This year seems to be a strong one for unique 2D indie platformers - just recently we got [url=https://www.gamewatcher.com/reviews/forgotton-anne-review/13026]Forgotton Anne[/url], and now we have Yoku’s Island Express. This game is the unexpected blend of two genres which I never thought could mix at all, let alone so well - Metroidvania and Pinball.

Yoku’s Island Express is a 2D exploration-based platformer with clear Metroidvania influences, which is particularly interesting since the game is almost entirely devoid of combat. Yoku, a dung beetle who for gameplay reasons not explained by the lore tied himself to a ball, arrives to Mokumana island to take over as the local postmaster. Once the previous postmaster, a Pterodactyl who seems overly eager to retire relinquishes his duties to you, the adventure begins.

The main novelty, and source of a fresh gameplay experience, is the pinball controls. When there are no paddles around, you can move left and right manually as Yoku pushes his little ball around, but the map must be traversed with the use of pinball paddles. I’d like to point out right here that this game was clearly designed with a controller in mind, as the keyboard controls though functional are uncomfortable to say the least. You move sideways with the arrow keys or A and D, and control the paddles with the left and right shift, respectively. 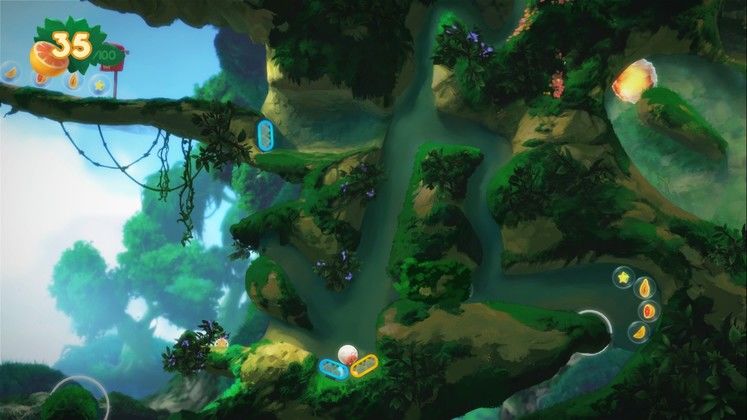 Paddles are differentiated by colour, though in many cases simple travel-facilitating paddles are universally controlled. The gameplay flow in Yoku’s Island Express becomes clear early on. The world is separated into sections of “dungeons”, which are areas with a more traditional pinball layout that offer a sort of puzzle that must be solved to progress. Other areas are reserved for NPCs and story events, and all of these are connected with easier to traverse areas that sometimes contain obstacles which direct progress by requiring an ability or item that is unlocked later on.

The game’s pinball puzzles are the main source of challenge. While on first glance very similar to traditional pinball games, they differ fundamentally. Your goal isn’t simply to score the most points, but to solve a puzzle and progress further in the world. Yoku’s Island Express gradually introduces new mechanics - these include explosive slugs who need to be collected in order to destroy debris blocking your exit from the pinball puzzle area, and small purple crystals needed to unlock doors.

These puzzles are varied, fun and innovative, and represent a high standard in using a rather basic set of mechanics to create different situations. The framing and presentation of these puzzles is also unique in each case - one puzzle had me block steam valves by introducing other balls beyond Yoku’s to the pinball area, while the other had me fight off a spider using the explosive slugs. Never does the game feel like it’s too bloated and yet it never ceases to surprise. 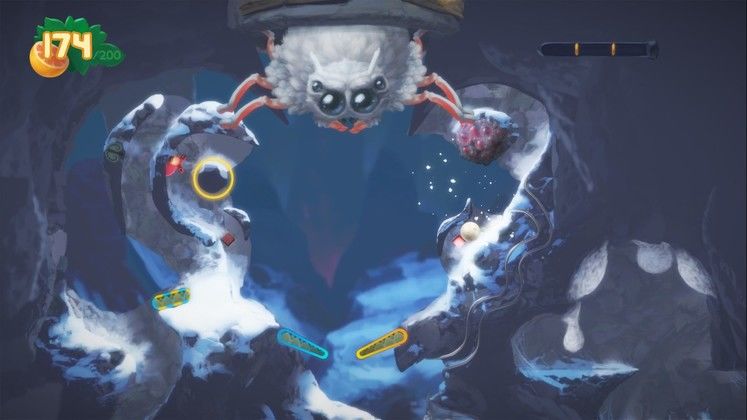 Level design is also a major strong point. The entire game world is a single, seamless map that, given the right items and abilities, can be traversed without interruption. It is sufficiently large, and contains a number of locations with a distinct visual design. Being a Metroidvania game, Yoku’s Island Express involves a lot of backtracking, which sometimes can feel a bit tedious, but it is never too much, and the lovely art style makes it all the more bearable. A fast travel system is eventually unlocked which helps in package delivery side-quests.

The game uses fruit as a sort of currency, though one will never be short on it. Sometimes paddles are locked and unusable unless a certain amount of fruit is pumped into them, while in other cases fruit can be used to purchase upgrades and maps from NPCs. Fruit is also needed to fuel the fast travel system, called the Beeline, which is composed of a series of beehive-like cannons that fire Yoku across the island.

Yoku’s Island Express absolutely excels in terms of presentation. I haven’t often played games as gorgeous as this one, with a colourful, saturated, lively vibe to every single location and backdrop. The art style itself is pretty, and the game is filled with unique designs. While most of the title’s very large cast of NPCs are based on real-world animals and plants, some are more fantastical than the rest and even the realistic ones are rendered with a personal touch. 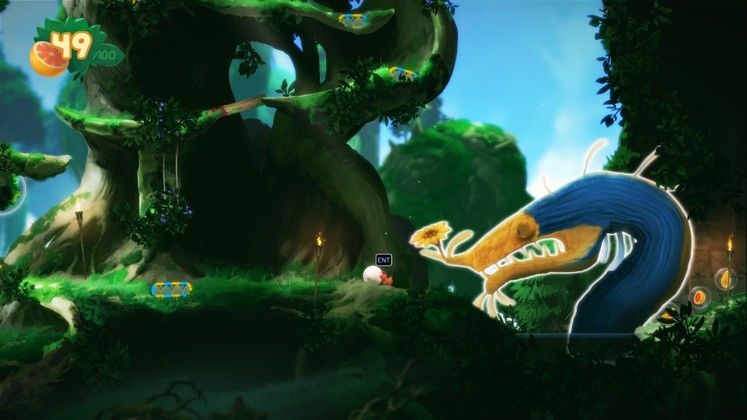 Audio design is another field where the game is strong. The music being beautiful and fitting is one thing, but the sound effects are nailed as well. Being somewhat hearing impaired, I rarely notice regular SFX in games so when I do, it really sticks with me. As you paddle the ball around the game world, shooting it high, falling down, knocking into things at high speeds Yoku lets out small squeaks and chirps, as you roll over the small flowers that mark save points they pop open in a small explosion of pollen, when you use your leashed Sootling (a small, black Tribble-like creature) to swing across carnivorous plants they latch onto said Sootling with a gratuitous quelch - the sounds in the game are as vivid as the visuals.

If Yoku’s Island Express drops the ball in one regard, it would be the storyline, but even there it finds a way to redeem itself. The main plot involves the island’s patron spirit, Mokuma, being injured by the recently re-awoken God Slayer, and it’s up to Yoku to solve the problem. While the basic plot progression isn’t particularly creative or memorable, the characters and little side-stories that you encounter along the way are extremely endearing and lovingly crafted. One standout sub-plot is that of a group of pilgim climbers who you accompany on your way to meet the frog-like Space Monks living on the highest mountain of the island.

Yoku’s Island Express has some rough edges - it isn’t exactly challenging, which might be off-putting for some, and backtracking through long-but-easy mini-puzzles just to reach the part of the map you accidentally fell off from is a bit frustrating, but these minor nitpicks pale in comparison to the fresh, unique sense of entertainment and the alluring presentation. 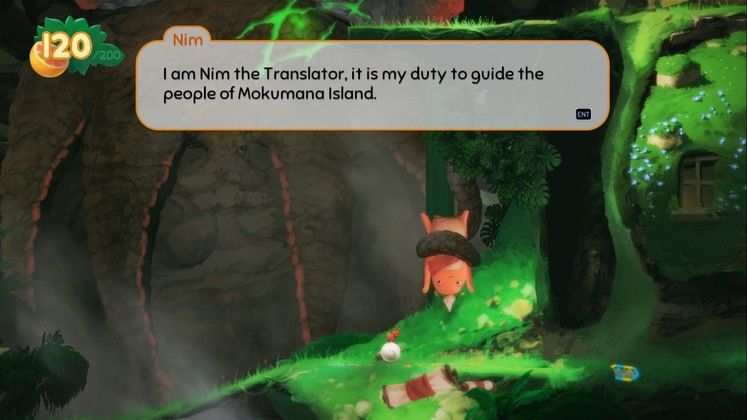 Yoku’s Island Express brought something to the table few games, even among those I enjoyed, have managed to recently - a true sense of freshness. It really is unlike most games on the market, and it manages to grow beyond this defining gimmick, nailing almost every other aspect. Between the fantastic gameplay, lovely presentation and endearing characters, minor faults like excessive backtracking and a somewhat flat main storyline are negligible.

My real Top Game Moment would be spoilery, so I’ll go with the point when near the game’s beginning Yoku gets launched through a section of map with a nice backdrop, and the title appears just as the music peaks. It’s a memorable way to start the game, and truly hooks players, instilling a desire to see more. 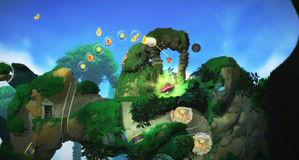