Bohemia Interactive’s epic combat simulator is as close as you can get to real war without donning a uniform and shipping out to Afghanistan..

Youtube and Twitch the "entire force" behind success for DayZ

Producer Brian Hicks for DayZ over at Bohemia Interactive reveals they're shy about 100k copies from hitting 3 million sold for the survival sandbox. Its mega success comes with a "nearly $0 marketing budget."

At times their Twitch popularity has beaten the cool kids of Dota, League of Legends and StarCraft. In fact Hicks points to Youtube and Twitch as the "entire force" driving DayZ's success.

ArmA players take notice: Bohemia Interactive has announced that user info, including usernames, emails and encrypted passwords, were broken into by hackers. While the passwords were encrypted, gamers are strongly urged to change them. 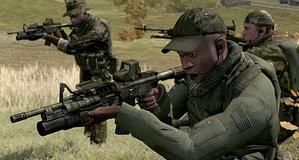