Stemshock Interactive has released a freeware edition of its adventure game Barely Floating, which is now available to download free on Strategy Informer.

Barely Floating takes place somewhere along the east coast of Africa, where a group of pirates have attacked a luxury yacht. The pirates have taken a few of the wealthy passengers as their hostages, a family and an old man, hoping to collect a hefty ransom for them. When the hostage negotiations go awry, it's up to an unlikely hero to save the day, but little does he know that the ships crew is composed of some very weird and silly individuals. 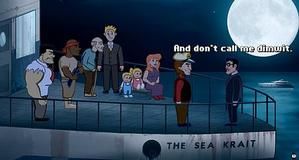