I’d hate to live on a battle world. I bet it'd be awfully noisy...

King Art Games has announced that the first patch for its turn-based strategy game Battle Worlds: Kronos is now live, along with a new demo. The patch generally increases match speed, enhances multiplayer, among regular fixes.

King Art has announced that their sci-fi turn-based strategy game Battle Worlds: Kronos will be available on GoG and Steam, as well as other digital distributors. The game will be DRM-free.

Battle Worlds: Kronos, a hex-based turn-based strategy in the style of Advance Wars, finished its Kickstarter funding back in April, and got approved for Steam Greenlight, will be arriving in November 2013. The game will be entering beta a month earlier in October. 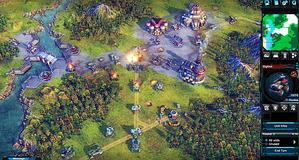