DICE has announced in the Battlefield Blog that the latest patch for Battlefield 3 will be released today in prep for the Armored Kill downloadable content. The DLC will also be launching today for Battlefield Premium PlayStation 3 gamers.

Electronic Arts has announced that the Armorerd Kill DLC for Battlefield 3 will be landing in September, and the date depends on what platform you're running it on and whether you have Battlefield Premium or not. 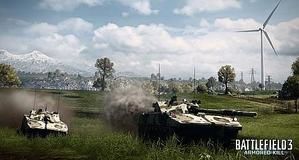