Blitzkrieg 2 is the sequel to the highly acclaimed tactical game of WWII from CDV. 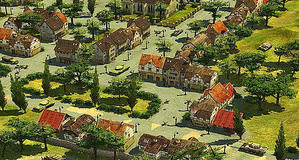