The closed beta testing for Dogs of War Online has ended with developer Cyanide bringing their multiplayer free-to-play tactical strategy game to Steam, where its open beta phase begins.

We create our company of mercs choosing from three factions: Light, Darkness and Destiny. It occupies the same figures universe as Confrontation, set in the world of Aarklash.

Focus Home Interactive announced this morning that Confrontation, the video game adaptation of the fantasy miniature wargame by Rackham, will be released exclusively for the PC on 5th April, 2012.

Cyanide Studio is working on another adaptation of a miniatures wargame, after having developed Blood Bowl. This time, they're adapting the wargame Confrontation into a real-time strategy game with roleplaying elements. 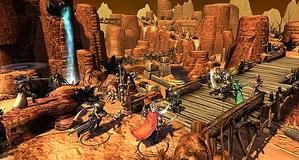