Both indie games are due later this year. Double Fine are bringing back the candy craze this Halloween as our favourite trick-or-treaters return to do battle in their costumes.

The practice of downsizing teams within the games industry after a project has completed is disastrous, argues Tim Schafer. It's one of the "most frustrating things" going today.

A team comes together and "maybe they struggle and make mistakes" but they've "learned a lot" by the end, and then "they are disbanded." All the experience is just "scattered to the winds".

Schafer talks up free-to-play virtues, laments the 'unchangeable past'

Double Fine Productions' Tim Schafer is all for the rise of free-to-play despite how it has been applied "scarily and slime-ily" in some cases. It lets games "grow over time organically" without a huge bill.

Schafer regrets not being able to have an "ongoing relationship" with fans of Brutal Legend and the like, as there were so many things he wanted to add. It was a game that suffered 'poor communication'. 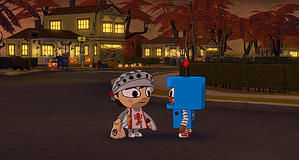