According to Blues News the game will have a "slick and groovy atmosphere", which sounds very Austin Powers, and lets you plan heists and robberies with a custom team of thieves. 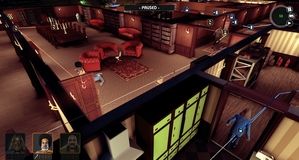