It's mega news from Capcom as they unveil the Mega Man Legacy Collection for PC and console. It contains the "8-bit history" of the studio's iconic Blue Bomber. Six Mega Man titles are bundled together in "faithful reproductions".

They also announce their line-up for E3 2015 next week and it includes the Unreal Engine 4 powered Street Fighter V , the remaster of prequel Resident Evil 0, and the Devil May Cry 4 Special Edition. 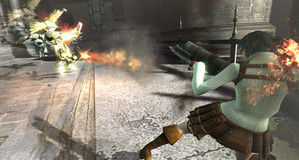