Elements of War hits US retail

Elements of War, Kalypso Media's new militaristic real-time strategy game in which players command both contemporary and futuristic weapons as they battle for the destiny of a near-future United States, is now on store shelves. The game features 12 extensive missions spread across 12 maps, each mission challenging the player’s tactical skills as they battle the enemy faction for control of the battlefield. 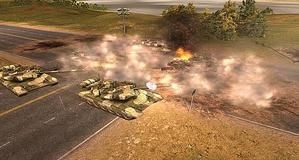