Registration is now open for Dirty Bomb, formerly Extraction, the free-to-play shooter in which players choose from a list of mercenaries with their own personalities and skills and then go head-to-head in the streets of post-apocalyptic London.

The beta will drop later this year, in preparation for Dirty Bomb's full launch. Invites will be sent out in batches via email to those who have registered.

There are limited slots available so pushing and shoving is encouraged. Alpha testers have been working tirelessly in the testing trenches already. The studio stress this is no 'pay-to-win'.

Developer Splash Damage has backspaced their free-to-play shooter's title from Dirty Bomb, and spell-checked it's new name of Extraction. It's set in London after a radiological attack on the British capital.

Splash spent a "long time finding the right partner" for Extraction, and Nexon America is that partner. They'll operate the F2P shooter in the US, EU and Australasia. It "will not be pay-to-win".

Brink developer Splash Damage has announced that the studio is sending out keys to members of the game's Founder's Club to engage in a closed alpha test for their upcoming multiplayer shooter Dirty Bomb.

The free-to-play online shooter Dirty Bomb from Splash Damage has just received its first gameplay trailer from the studio, which features "pre-alpha" mayhem around London Bridge. $30 gets you into the beta.

The Founders Club offers those desperate to get in on the action the chance right now if you shove a fistful of cash at them. It ranges from $30 all the way up to the 'VIP Founder Pack' at $320. 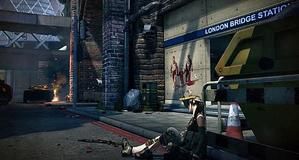