A new rumor has emerged that F.E.A.R. 3 developer Day 1 Studios has laid off 95% of its 140 man development team due to a canceled publishing agreement with Konami to develop a new Silent Scope game.

John Carpenter is best known for his horror films like The Thing, Halloween, In the Mouth of Madness and Christine, to name a few, but has started to get more involved in the videogame industry, and is starting to champion the medium as a potent one for horror, stating, "I think the potential for games is unlimited."

A new patch for recently released for the PC version of F.E.A.R. 3 is now available on Steam. Most of what the patch does is improve the graphics quality, including a frame rate boost, and voice communication. 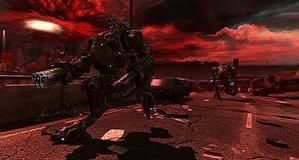