Codemasters has announced that a major F1 2011 patch will be going live today which will fix a host of issues, including tweakers to the AI, better online connectivity, and other technical issues. The developer is also warning that a fix for a set-up bug means that the online leaderboards will be reset for both the time trial and time attack modes. The wipe is currently scheduled for some time next week.

Bethesda and id Software's apoco-shooter Rage has been kept away from the UK all format chart crown by EA Sports' FIFA 12, which stays numero uno. 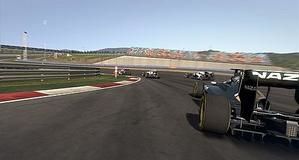