Formula One demands F1 mods be removed from RaceDepartment's site

The marketing department has demanded that hosting site RaceDepartment remove all of the user-created F1 licensed mods from its library, including mods for Automobilista, F1 2013 and F1 2014.

Codemasters is once again teasing new game project announcements and remark it's "like the calm before the storm this week," while developers are "getting builds ready," and the PR staff prep their 'PR stuff'.

New DiRT and GRID titles have been teased for a while by Codemasters and it seems they're almost ready to show something. There's also more Formula One on the way.

Codemasters has announced two new downloadable content packs for their Formula One racing game F1 2013. The two DLC packs will be available for PC, Xbox Live Marketplace and PlayStation Network.

While EA Sports' FIFA 14 may have kept the crown for another week in the UK all format chart, Rockstar's Grand Theft Auto V after just three weeks on sale has blown past lifetime sales of its predecessor.

Codemasters "knit everything much more tightly together" with F1 2013 weather

A storm's brewing - or is it? It could be. Codemasters have announced they're revising the weather system in F1 2013 with 'scenarios' that are randomly picked and are much longer at 4 hours.

This improves on the localised weather that had it raining on certain sections of track. Codemasters use "historical data" for weather on tracks based on the seasons. 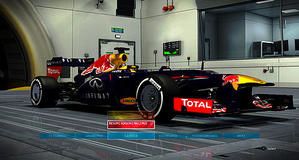