Considering every factor, this is a game well worth playing.

Fable Anniversary can be modded, "anything our artists and animators can do"

Lionhead Studios have made some diehard Fable fans feel chuffed as they announce the imminently due Fable Anniversary for PC will fully support mods from the community.

While not at launch, which is tomorrow, they will be adding in full Steam Workshop support. The possibilities are enticing, although community-made quests aren't possible.

The remastered Fable Anniversary, whereby Lionhead took the original game and The Lost Chapters add-on and remade it using Unreal Engine 3, will be finally coming to PC next week.

So far it had only been released for Xbox 360, disappointing original PC fans of the Lionhead Studios RPG. Now we'll be chicken-chasing with a better graphics engine through Steam.

Lionhead Studios' lead designer Ted Timmins has said they if the noise is loud enough for a PC Fable Anniversary then the mob might get their way. Anniversary is a re-release of the original Fable: The Lost Chapters.

Sadly, almost criminally, it isn't destined for PC but Xbox 360. Timmins stressed it was unlikely to migrate to Xbox One because of the episodic Fable Legends project.

Is another Fable on the horizon? Are we going to return to Albion, the land of golden breadcrumb following Heroes? It could be as job ads for Lionhead Studios seek developers experienced with Unreal Engine.

They specifically state these new employees would be an extra shoe in if they had knowledge of 'reimaging' established franchises. Reading between the lines it points heavily toward a new Fable. 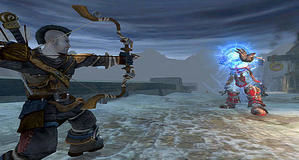