Electronic Arts shuts down online for a batch of older games

On the 11th January, Electronic Arts will be shutting down online support for their 2011 branded EA Sports titles, as well as The Sims 2 a few days later.

Xbox Live dominated by shooters in 2011, Call of Duty hogs the podium

Activision's Call of Duty claimed 1st, 2nd and 3rd place in the Xbox Live chart for most played in 2011, with Halo: Reach and Battlefield 3 without medals 4th and 5th respectively.

EA Sports has announced a "multi-year endorsement contract" that sees footballer Lionel Messi as the new face for FIFA, beginning with FIFA Street in March next year.

This also means Messi will become an 'EA Sports Football Ambassador', and used in all marketing campaigns for the series. They'll also be supporting the Leo Messi Foundation. 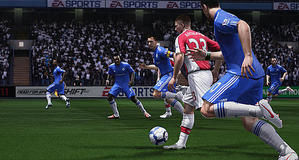