EA has delayed a free FIFA 14 update introducing new World Cup content to the game's card-collecting Ultimate Team mode. The update was meant to roll out today, but EA Sports announced in a forum post that they were pushing it back “to ensure the best possible experience".

FIFA 14 has retaken first place in the UK game chart, with Respawn's mech shooter Titanfall again losing its number one spot after The Amazing Spider-Man 2 punted it into second at the start of the month.

Team of the Season cards added to Fifa 14 Ultimate Team

With the football season slowly coming to an end, FIFA 14 Ultimate Team has included a new series of Team of the Season cards. EA Sports have already added Most Consistent squads for Gold, Silver and Bronze-level players.

Once again EA Sports has lead the kick-off for the UK chart in an all-new year as FIFA 14 achieved its 6th week as number one. FIFA 13 managed the same thing week one last year, with 21% less sales.

FIFA 14 almost had the UK chart crown last week but was 600 sales short of toppling Call of Duty: Ghosts which is enjoying its 3rd consecutive week on the throne, and its 5th since launch. 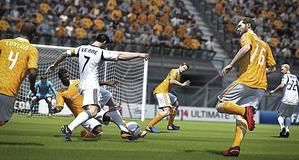