Sega and developer Sports Interactive have partnered with Vue Cinemas and producers FilmNova to release a feature length Football Manager documentary studying the impact of the game in both in wider culture and the professional world of football.

An Alternative Reality: The Football Manager Documentary is rumoured to include a scene where I throw a cup at the wall after losing to Oldham Athletic on penalties in the fourth round of the FA Cup.

Real football teams are now using elements of the Football Manager engine to search for new players. The game's database of playing staff is being integrated into performance analysis software Prozone Recruiter, a programme already used by several high-profile clubs.

“The database is a highly accurate and valuable resource. It will further enhance the recruitment services we provide,”

Sports Interactive have released a new patch for Football Manager 2014, fixing various problems and removing a bug that caused the Belgian league season not to be scheduled.

Most of the changes pertain to the temperamental 3D match engine, and includes fixes to reduce wild challenges and long range shot attempts. 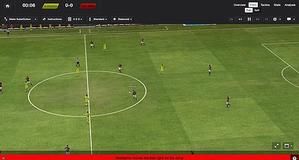