There's no shortage of developers looking to capitalize on the ever-growing MOBA scene. Some climb high while others falter down below, but a game suddenly increasing its overall speed to better compete isn't totally unheard of either. And that's what's happening with today's Fractured Space - Phase 3 update.

While we can guarantee a Halloween update would have occurred regardless, Edge Case Games - the folks behind Fractured Space - are celebrating reaching one million players by adding a spooky moon to the game's main map alongside a dead guy willing to do the heavy lifting on your ship.

Fractured Space, a title that blends space combat with MOBA-style team matches, has been in Early Access for nearly two years. The alpha’s been taking shape leading up to the game’s recent free-to-play launch, and now it looks like the game is about to hit beta.

With the 2016 games upon us, a number of digital competitions are trying to channel the spirit of athletic sport, though with only vague references so as not to enrage the trademark gods enthroned upon Mt. Olympics. Fractured Space is taking the opportunity to launch their Olympian update, filled with opportunities for you to show your national pride.

The developers of Fractured Space, Edge Case Games, have announced their game will be switching to the free-to-play model in preparation for the full launch later this year. Edge Case Games have also released a major update to the game, bringing with it significant gameplay changes. 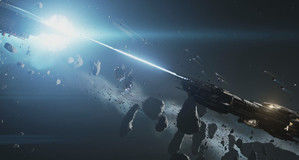