Codemasters return to the grid in an attempt to steal the chequered flag.

The official GRID YouTube channel has added an 18 second teaser trailer which features mostly nothing but a few streaking red lights that dart across the screen. It's entitled 'Brace Yourselves... Racing Is Coming'.

Codemasters has been teasing something new is on the way for GRID and/or DiRT, and now we appear to have a date for the next GRID racer to be unveiled: April 22nd.

Codemasters is once again teasing new game project announcements and remark it's "like the calm before the storm this week," while developers are "getting builds ready," and the PR staff prep their 'PR stuff'.

New DiRT and GRID titles have been teased for a while by Codemasters and it seems they're almost ready to show something. There's also more Formula One on the way.

There are "secrets" over at Codemasters according to a new twitter tease from the studio, and this particular hush-hush topic is likely GRID related. The GRID twitter account has tweeted an image of a labelled door.

The world 'Playtest' is stamped on it followed by the caption "Shhhhh secrets". Codemasters is yet to announce future racing titles in the works but GRID seems like one. Call it a hunch.

An ultimate, definitive, director's cut or 'reloaded' release bundling all DLC? These are becoming ever more common as studios bury us in an avalanche of DLC packs, and now Codemasters joins them.

GRID 2 Reloaded takes the base game and then crams all nine DLC packs into it, and it's available right now for PC and PS3, so if you waited for this very moment - good job.

Rumor: GRID 3 is the game Codemasters is seeking beta testers for

Codemasters has started inviting players to beta test a "super-secret early game" which is apparently a racer, and the questions asked of gamers seem to be suspiciously for GRID 3. 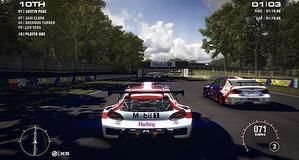