How, within a simple few seconds, do you get a significant player base frothing at the mouth? You get a Valve executive to teasingly point at the number '3' in an elevator, before choosing another level in the building.

Naturally this might be thought of as a Half-Life 3 trolling, but there's a real significant chance this might be for a Left 4 Dead 3 reveal. It's got an 'L', a '3' and a '4' in the clip.

Valve had submarine game plans, studio 'could end up revisiting'

Before Half-Life cemented PC developer Valve in most gamers' hearts forever, Gabe Newell reveals they had plans to release a submarine title.

The boss says that no idea 'ever really dies' at Valve, it's more a question of "how long until we get around" to it. It's their "furthest back" unshipped project. 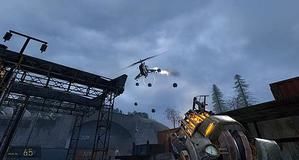