Tripwire Interactive took part in a panel at PlayStation Experience over last weekend (the game's coming to PS4 as well as PC), and they were pretty excited to show off the dismemberment and gore engine they've come up with for Killing Floor 2.

The update adds a new map set in a zed-filled amusement park, and a selection of Christmas themed enemies to slay.

Killing Floor 2 is disgusting in the best way possible

Tripwire Interactive certainly isn't skimping on the gore in its upcoming zombie co-op sequel, Killing Floor 2. In fact the development team has come up with whole new dismemberment system that takes the blood n' guts to a whole new level.

The M.E.A.T system (that's Massive Evisceration And Trauma by the way) is heavily inspired by Soldier of Fortune 2, a game that elevated poking holes in people into a disgusting art form.

Tripwire Interactive has released a new video for their upcoming co-op zombie-blaster, Killing Floor 2. It shows off five different enemy 'zeds' that could really do with some killing.

They are; the Clot, Slasher, Crawler, Cyst and Fleshpound. The crawler is some kind of spider-zombie thing. There's no need for that. 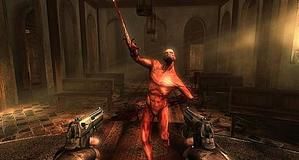