Knights of Pen & Paper developer Behold Studios has successfully funded its Kickstarter fundraising for its television show sim Chroma Squad, which puts the players in the role of a manager of a sentai-type show - that is, Power Rangers or even Captain Planet.

The table-top meta-RPG Knights of Pen & Paper +1 Edition is now available on PC as Paradox Interactive let loose the launch trailer. In it we play as table-top RPG'ers playing their RPG. Meta FTW!

It's turn-based and there's an assortment of players to choose from like the Pizza Guy, Jock or even Grandma. We take the role of players and Dungeon Master in this indie RPG.

Paradox Games has announced that the publisher is bringing developer Behold Games' iOS smash hit Knights of Pen & Paper to PC. The game is due to be released in Q2 2013. 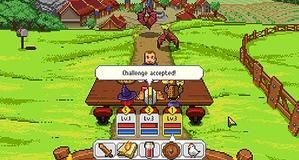