QoocSoft has announced that the developer's old-school calligraphy-inspired brawler, Kung Fu Strike: The Warrior’s Rise, will be hitting Xbox Live Arcade on the 5th September for 800 Microsoft Points.

While the Xbox Live Arcade version of Kung Fu Strike: The Warrior's Rise seems to be in limbo, QoocSoft has announced a PC version for release on the 24th July.

The game tells the story of General Loh, a warrior struggling to avenge his father’s death while around him ancient China spirals out of control due to warring factions that threaten to split the country apart, told in the style of ancient Chinese tales of revenge and retribution. 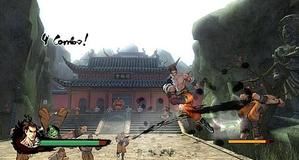