Now this isn't a demo, so don't get too excited, but Legend of Grimrock 2 developer Almost Human has released a compatibility tool for its upcoming dungeon-crawler sequel, letting you check to see if your PC can handle it.

There's no in-game content, the tool will instead "fire up the Grimrock 2 engine and display a 3D scene while the new Grimrock 2 main menu music plays in the background".

It's coming October 15, and you can pre-order the game over on the official website. Buying the game nets you both a DRM-free copy and a Steam code.

Developer Almost Human has revealed that dungeon-crawling sequel Legend of Grimrock 2 is now in alpha, but interestingly also confirmed that the title would not be getting an Early Access version, unlike almost every other new release these days.

Speaking to RPS, the team said, “We are kind of old-fashioned and want to release the game in a polished condition, so Steam Early Access is not planned. We are going to have preorders though.”

Legend of Grimrock 2 is on the way to feed the PC community it's retro dungeon-crawling appetite, and now developer Almost Human has revealed more about the sequel and includes some new screenshots.

Four prisoners are stranded on the Isle of Nex, which is a "secluded island faraway". Outdoor and indoor locations switch "seamlessly" in this "perfect microcosm".

First screenshot of Legend of Grimrock 2 shows off overland beauty

Legend of Grimrock was a surprise indie hit, a turn-based 3D dungeon crawl reminiscent of the classic Dungeon Master that was released on the Atari ST and Commodore Amiga. The developer, Almost Human, has been working on a sequel, and have released a screenshot. 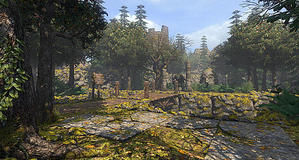