A ravenous mixture of strategic RPG and action beat-'em-up, Marvel: Ultimate Alliance proves that superheroes can still be fun.

Do you like superheroes? How about Diablo? If you put down a yes for either of those, then you should really play Marvel Ultimate Alliance. It doubled down on the “action” part of action RPGs when it first released back in 2006, and its colorful cast of superpowered heroes drew from Marvel history to bring back characters both famous and obscure. Now it’s coming back, remastered, along with its sequel. 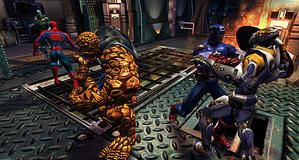