BioWare: Labelling next game as Mass Effect 4 a "disservice" - the trilogy is over

Chris Priestly of BioWare has warned against thinking of the next Mass Effect instalment as a numerical increment to Mass Effect 3. It causes "a lot of confusion" among fans thinking of it as a straight sequel.

The Commander Shepard trilogy is done with, affirmed Priestly, which is the only 'revealed detail' about the next title. It's about 'what happens next in the Mass Effect Universe', and not 'after Shephard'.

Gamers have been studiously data-mining the latest update to Mass Effect 3 and have found something. Files allude to something called 'Reckoning' and it appears to add new online modes.

Specifically, BioWare will be adding new co-op modes that 'link' to single player decisions which include paragon/renegade points and overall progress. It will add six co-op story missions.

Next Mass Effect 3 story DLC has 8 writers, Seth Green among actors called back

BioWare Edmonton is behind the next major story DLC piece for Mass Effect 3, taking over from BioWare Montreal's Omega tour of space duty. Designer Jos Hendriks said it's "all hands on deck".

Chief composer Sam Hulick teased there's "high potential for tears," in the new content as he focused on "piano and muted strings" for one piece. Actor Seth Green contributes to DLC this time.

BioWare has revealed the next major DLC instalment for Mass Effect 3 is indeed Omega, and it's the largest effort to date as it's "double the size" of Leviathan's single player extension.

It's also the highest priced DLC yet for Mass Effect 3 unless you count the Cerberus Network pass. It's going for 1200 MSP or about $10. New enemies will be included and a female turian!

Fans of Mass Effect 3 who have once again been data mining the game's files claim to have uncovered text specific to upcoming DLC involving Omega station, a notable hub in Mass Effect 2.

It has been alluded by Aria T'Loak in Mass Effect 3 that she was ousted from Omega by the Illusive Man his Cerberus forces, but it seems we'll be getting the opportunity to take it back. 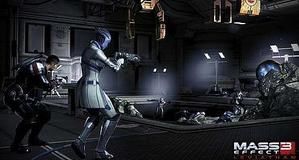